Adam Nicholson, son of Nigel Nicholson (author of Portrait of a Marriage, the 1973 biography of the 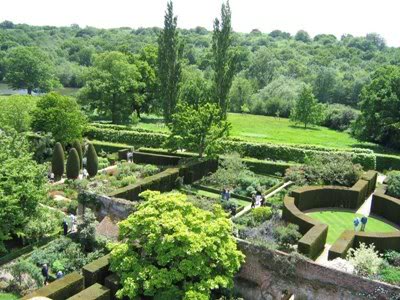 complex marriage of his parents, Harold Nicholson and Vita Sackville-West), spent his rather sylvan childhood at the family estate at Sissinghurst Castle in Kent, UK.

His memoir, Sissinghurst, An Unfinished History, begins with his family’s return to the property after Sackville-West’s 1962 death in order to care for Harold and their extensive holdings, and to preserve the famous gardens that she had created after purchasing the ruined estate in the 1930’s.

The disintegration of his family, his parents’ divorce and the withdrawal of his father into silent scholarship is delivered through the eyes of a lonely child in love with his home who finds solace and peace in the surrounding forest.

An adventurer, author, publisher, conservationist and historian, Nicholson traveled extensively as adult and married Sarah Raven, an English gardener and writer. He farmed a nearby property before he returned to the Sissinghurst, now owned and administered by Britain’s National Trust, after the death of his father in 2004. 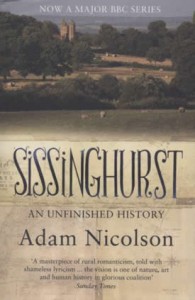 In this recently published book on Sissinghurst and what he calls its unfinished history, Nicholson braids together a sweeping view of English natural, political and social history, the evolution of farming and gardening and the complex relationship between the National Trust and the “donor families” in the preservation of the grand English estates. The presentation of his vision of a “new” Sissinghurst Castle and grounds and the subsequent battles he has with the National Trust over these ideas is balanced by the
chronology of ownership of the properties, full of political intrigues and machinations, and the record of carefully managed growth and development of the buildings, farm and gardens.

This is a love poem to a place – an ode to the majesty of the natural world and the effort it takes to preserve it. Nicholson’s style is lyrical, wandering, dreamy. You find yourself steeped in medieval history, filled with visions of Elizabethan excess, heart aching at the wanton destruction of buildings and land in the 18th century and, finally, elated at the rebirth of this majestic estate. The subtitle is apt; the tale continues and it is a delight to read.

(Sissinghurst, An Unfinished History: the quest to restore a working farm at Vita Sackville-West’s legendary garden, by Adam Nicholson, Viking).