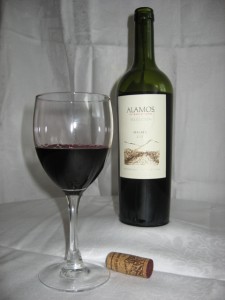 In America, Malbec isn’t a flashy or sexy wine and you probably wouldn’t bring a bottle as a hostess gift to the home of someone you were trying to impress with your prowess in haute selection. The color is not always as bright a ruby-red as a Cabernet or Merlot of the same age. And it sometimes has a lower alcohol content than those two wines. Malbec is more modest in bouquet and flavor profile. And it’s usually not a fruit bomb, although every better Malbec should have fruit on the nose.

And yet, over the last decade, I’ve become a fan of Argentinean Malbec wines and there are always a few bottles in my home cellar. It’s a reliable house wine in our family, especially since we enjoy red meat and Malbec is an engaging wine to pair with carnivore choices.

I first discovered Malbec when I was looking for a lower-priced red-wine option on the menu of an expensive restaurant in our town (I bristle at restaurant wine mark ups). So, I chose the Malbec because of its price. Surprise, I liked it just fine and went on to explore other wines made from this grape. Malbecs, I learned, are more widely available in wine stores (big box and boutique) than in supermarkets. My search led to research.

In France in the Bordeaux region, Malbec is a lowly blending grape and gets little respect as the principal grape in any wine. Investigate Argentina to find Malbec glorified. The best Malbec grapes are cultivated in the Mendoza Province, about 1,000 miles inland from the Atlantic Ocean, by the foothills (and often at a 4,000 feet elevation) of the Andes Mountains which separate Argentina from Chile. Argentina, which shares the pampas region with Brazil and Uruguay, is noted not only for its beef production but most notably for its beef consumption in which it ranks first in the world. In the US we consume an average of 69 pounds of beef per person each year. In Argentina that figure is 103 pounds per year. And, as you probably guessed, Malbec is the wine Argentineans believe suits beef best.

Whether they’re “right” is obviously a matter of personal taste. When I factor in price and the variety of Malbecs currently available in the States, a good case can be made for at least including them in the conversation and in your cellar.

At home, I enjoy Malbec with steak, hamburgers, meatloaf, shepherd’s pie, stews and meat casseroles. Works with a sausage and mushroom pizza too. When hosting a sit-down dinner where red meat is the entree, I’ll put out bottles of Cabernet and then slip in a Malbec too. I like to observe which of my guests takes the bait. It’s fun to see how often they are surprised by the food friendliness of a Malbec. 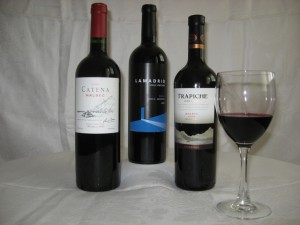 Then, there’s the price-friendly nature of Malbec wines. A bottle of satisfying Malbec can be had in the $10-$12 range. In that range, Trapiche Oak Cask Malbec 2009 is a fine choice; Lamadrid Single Vineyard 2009 or Alamos Malbec Seleccion 2008 are winning selections for a couple of dollars more; and Catena Malbec 2008 will set you back $16-$20, perhaps because it received a Robert Parker rating of 91.

So, although Malbec may seem a modest proposal of a wine – I’m betting that many readers will be pleasantly surprised at how well it will pair with beef or game in its more civilized or rustic form. If you’ve got beef and you enjoy variety or you’re budget conscious, you could do worse than fill your glass with a fine Malbec.

3 thoughts on “A Modest Proposal, Malbec”