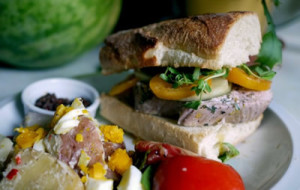 As if anyone needed to give food lovers an excuse, the month of August has been officially designated as National Sandwich Month. Everyone loves a great sandwich no matter what time of year, but during summer when-the-living-is easy, hand-held food becomes the ideal star of casual meals enjoyed inside or organized al fresco.

In recent years, the popularity and easy availability of artisan breads, wraps, organic vegetables, gluten-free options, and multicultural spreads have made sandwiches more interesting than even. Today, there are even whole categories of breakfast sandwiches that are making it possible to enjoy sandwiches three times a day and be both happy and well

nourished. Sandwich cookbooks proliferate and just about everyone in America has his or her favorite sandwich – the hamburger, grilled cheese, ham on rye with mustard, chicken on a baguette with aioli, you name it. Or invent it.

The sandwich, as popular legend goes, was invented by John Montagu, 4th Earl of Sandwich, who was an 18th-century English aristocrat. An obsessive gambler (cribbage was his game), he ordered up a slab of meat between two pieces of bread one night so that he could eat and not have to leave the gaming tables. Of course, a meat/bread combination has been around since ancient times, the Earl just gave this popular food group a name. And it stuck.

If you’re stuck for what kind of sandwich to make for guests or your family this month, here are three picks from cookbooks I love. Open wide and say yum!

from Chef Emeril Lagasse in the cookbook Food Network Favorites. 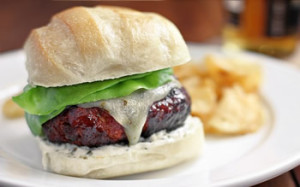 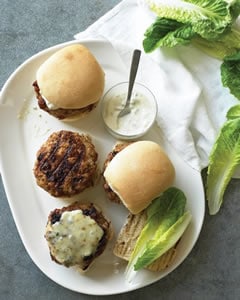 In the bowl of a food processor combine the mayonnaise, garlic, poblano and lime juice and process until smooth. Season with salt and black pepper to taste. Yields about 1 ½ cups.

Combine all ingredients thoroughly and store in a jar. Yields about ? cup.

Preheat grill to medium-high. Place the chorizo in a food processor and process until finely chopped. Sausage should appear crumbly. Transfer to a large and add the found pork, garlic, Worcestershire, Essence, salt and cayenne pepper and mix gently but thoroughly, being careful not to overwork the mixture.  Form the mixture into four patties and grill to desired doneness, about five minutes per side for medium. During the last two minutes of grilling, toast the buns and sprinkle the cheese over the tops of the burgers and cook until melted. Transfer the burgers to the bottom of the buns and place on plates. Generously top each burger with two tablespoons of the green chile mayonnaise and place the buns over the sauce. 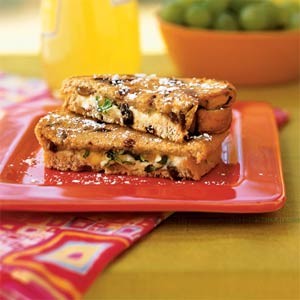 Brush one side of each bread slice with butter. Place on a work surface, buttered side down. Spread tops of 4 bread slices equally with fig preserves, honey and goat cheese. Cover with remaining bread slices, buttered side up and press together gently. Place sandwiches on preheated panini grill or in a large skillet over medium heat and cook, turning once if using a skillet, for 3 to 4 minutes or until golden brown and cheese is melted. Serve immediately. 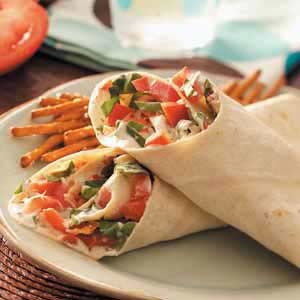 from Potluck at Midnight Farm by Tamara Weiss

2 bunches of asparagus, at least

salt and pepper to taste

Steam the asparagus until just tender. Spread each tortilla with goat cheese, then make layers of sun-dried tomato strips, spinach, red pepper strips, artichokes, pine nuts and asparagus spears, about four spears per wrap depending upon thickness of the asparagus. Fold the bottom of the wrap over the filling, then roll left over right, leaving the top open. Leave whole or cut in half on the diagonal and arrange on a platter.