Competition is fierce and delicious at “The Jack” as 35,000 visitors
converge at the distillery in Tennessee
By Doc Lawrence – 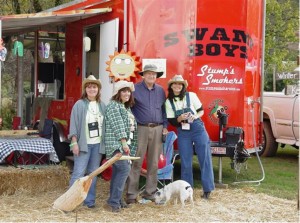 LYNCHBURG (pop. 361), Tennessee. It was the location and the Jack Daniel’s legend that first attracted me. The ancient distillery in bucolic rural Tennessee is host to the world’s most prestigious and selective barbeque competition, the Jack Daniel’s World Championship International Barbeque Competition.

Jack Daniel started making whiskey here 1866. Lynchburg remains whiskey’s heartland in a storybook setting somewhere between Mark Twain and Norman Rockwell. Nestled in the rolling hills between Nashville and Chattanooga, the village has a Currier and Ives feel and all the color and whimsy of a Grandma Moses painting.

Patrick Sullivan, a distinguished gentleman from Ireland who founded the Irish BBQ Association, told me that whiskey – the drink and the word – is Irish. “We invented whiskey around 1400, and the name comes from the Gaelic uisce beatha which means water of life.” The Jack Daniel’s Distillery holds the distinction as the oldest registered distillery in the United States, a fixture on the National Register of Historic Places. 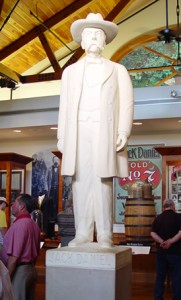 On this landmark weekend, a thick plume of hickory and oak smoke welcomed championship barbecue teams and some 35,000 visitors from around the world. After the swearing in as a full-fledged judge, I was once again in hog heaven. “Barbeque competition is serious business and the rules for winning are strictly enforced,” said one of the high-profile judges, television celebrity Kelly Sutton, morning news anchor at Nashville’s WZTV.

To compete at “The Jack” domestic teams must have in the past year won a state championship. “Being on the professional barbecue circuit is a way of life, and many people spend their whole lives trying to get to ‘The Jack’,” said Lynne Tolley, great-grandniece of Jack Daniel. Ms Tolley, a successful cookbook author confided that she keeps her ancestor’s Tennessee whiskey in her pantry. “I use it as a substitute for vanilla flavoring.”

Arriving at The Jack begins with lunch at Middle Tennessee’s culinary shrine, Miss Mary Bobo’s Boarding House where everything is served family style in the Southern tradition. Founded in 1908, strangers become friends while feasting on the fabled stewed apples which, revealed Ms.Tolley, “have a little Jack Daniel’s in them.” Joining us for lunch were guests from the four corners including Scotland and New Zealand. The piece de resistance was cherry cobbler with a dollop of fresh whipped cream that suggested a measure of Jack Daniel’s. 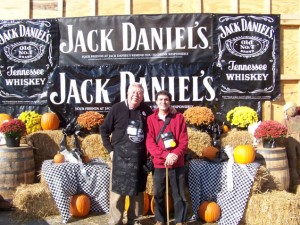 Before judging, everyone is treated to a mountaintop wing-dang-do complete with live country and robust bluegrass music featuring several renditions of the ubiquitous “Rocky Top,” a bluegrass classic now synonymous with the state and University of Tennessee. This was a chance to chat with Jeff Arnett, Jack Daniel’s Master Distiller. After a few glasses of Jack Daniel’s to wash down a platter of fried chicken, it was time to come down from the mountain and rest up for the next day’s historic competition.

Each year, I reunite with other judges including some of the biggest names in Tennessee’s popular culture. One, Silky Sullivan, is a Memphis restaurateur and bar owner who has served cocktails to American drinkers for generations and is a veteran of The Jack. Sullivan told me he once barbequed reindeer in Red Square, attracting the then Soviet Prime Minister Mikhail Gorbachov. “My barbeque,” said Sullivan, a master raconteur, “and the raging appetites for a platter, directly contributed to the fall of Communism.” The other was the legendary Johnny Majors, an All-American football great at the University of Tennessee and a coaching success at Pittsburgh and Tennessee.

Any award at The Jack is a victory. Because the level of competition is very high, winning carries enormous prestige. Lynchburg is dear to all who have precious memories of the rural South. Everything is somehow directly tied to Jack Daniel’s and a tradition of genuine hospitality. Down here, it’s called Americana.

(Photos: Doc with a Florida team. A statue of Jack Daniel. Doc with his son Stephen at The Jack)

1 thought on “Barbeque is Global at Jack Daniel’s”