Don’t be cheap with your garden helpers. I don’t mean your mother-in-law. I’m guessing, but there’s probably a lot of junk in your potting shed masquerading as tools. Shoot me if I’m wrong, but you’ll go to your favorite feeding trough and drop $25 on a mooseburger and a beer and yet you’ve still got tools you bought four elections ago.

The hardware store ain’t gonna get rich on you, is it? Those antique tools you cherish have so much rust on them that the Heath Department should condemn them. Well here comes yet more sage advice for which you didn’t ask: Upgrade and make your gardening life easier and less work. 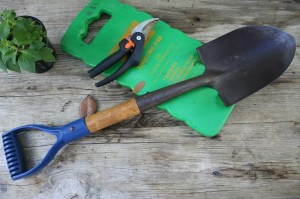 Pruning shears: Anyone in the dueling business will tell you that a clean cut is a good cut. A clean cut is also a good idea for pruning, but not with the dull, limb bending (but not cutting) shears you own. First, when you finally pry out at least $20 bucks (and don’t spend less Scrooge), phooey on picking anvil shears. They mush up the cut which then won’t heal easily and fast. Buy the by-pass shears. If this by-buy is confusing, think about how paper scissors work and that’s the action you want. Be cool under the pressure of big decisions. The shears pictured are my current favorites as they have gears that decrease the pressure needed. Locking mechanism is thumb easy and positive. They are light, mostly a composite that doesn’t rust, but spring for a spray can of lithium grease to keep the few metal parts working easily and not rusting. Fiskars. $27.

Shovel junior: This one is for digging small holes. Note the blade comes to a point giving you a clue as to why these are known as spades rather than clubs? (You don’t get info like this everywhere). The smaller blade cuts through roots, disturbs less area and doesn’t herniate you when you lift out the 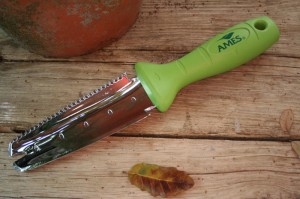 dirt. We cognisenti of soil file the leading edges sharper to make them even more lethal for root cuts. Ames $10.

Trowel: Fondle this beauty. It has a no-rust blade. The composite handle has a bright color to keep it from getting lost and a flat top for driving in fertilizer stakes or tamping down the soil around the newly planted. There are one inch indents on the blade to measure the depth of a hole. The blade also has a serrated edge to cut roots and a straight edge to cut open mulch bags. Plus a split tip for weeding judiciously. Absolutely the best around. Ames. $10.

Kneeling pad: Being the hardy outdoor fool, you probably like getting your knees muddy, wet and dented from stones. Good for you, dumbkopf. You could buy one of those waterproof, high density foam pads to kneel on but that would be the wussie’s way out. Right-on rugged, save that $4. 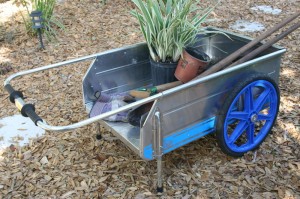 Wheel barrow, updated: The cost of this beauty will financially make you a whiny baby but it’s so worth it! The Foldit weights 33 pounds, balances up to a 330 pound load and really, it folds up. Then the handle retracts! It’ll stow in your Pinto if you have to help at your mother-in-law’s this weekend. Three bags of mulch easily fit. Dumps easily. Won’t rust because it’s marine grade aluminum and stainless. It can stay out in the weather since it’s made for marinas but works great in the garden. And made in the USA! Tipke. $220 to $350 depending on how much you shop around.

Post hole digger: These damn things haven’t changed since the West was won. But for easier drilling of holes when you’ve got 50 annuals to put in or 15 shrubs, go crazy and buy one. It enables you to cut straight through the roots, pick up a load of dirt and drop it right into your wheel barrow. You can also cut phone lines, cable lines and irrigation lines until they put your name in the utility company hall of morons. Plus this fab stomach muscle builder has made me a God-like legend around the F&M water cooler. Autograph? $27

Camera: This may sound dumb but who IS the expert here? Take a dozen different angle shots of your garden every season or even more often. Three years from now, after you’ve killed who knows how many specimens, you’ll have forgotten what a wide ranging dirt felon you are. And then possibly you’ve gotten better at this and should try that rare double breasted Himalayan daisy again. Or not! Plus it’s nice to see how well (if?) things have progressed.