Merriam-Webster on “ergonomics”: an applied science concerned with designing and arranging things people use so that the people and things interact most efficiently and safely….

in other words, they feel your pain and try to ease it.

So students, here are five garden tools or products that put ergonomics into practice. You want these tools. Though the word “ergonomics” arrived in the language in 1949, it’s getting to be very important as baby-boomers bloom.

Shears (on a stick): As all accomplished pruning students know, cutting the not-so-easy to reach shoots in the center, and close to ground level, encourages bushes to bush. (That’s why bushes are called “bushes” and not “goofy sticky-uppie” plants.) Here’s one fab solution. Think separating the squeezeie handle (tech talk) from the cutting blades with a two-foot aluminum tube. Eureka!, this gives you arms that are now two-feet longer, so you can get into the plants’ core without lacerating yourself. It is a well known anthropological fact that Neanderthals were great pruners. This light-weight pruning tool is also good for clipping overhanging (up to 1/2”) branches.

Trowel with notched edges: The absolute best trowel. This digger cuts the roots with the sawesque edges as you burrow down. 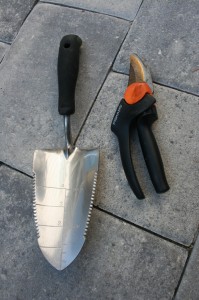 Repeat – cuts-the-roots as you go. Nice fat “grippy” handle that’s easy to hold. Angled for leverage but it won’t bend. No-rust stainless steel, for you the forgetful who leave things out. Shiny enough to find later, even for a Magoo. Buy it from Oxo at most good garden places.

Hose quick-disconnect: Not new but an under-used labor saver. Derived from hydraulic line quick-disconnects used in changing out aircraft engines. Instantly switch from soaker head to spray nozzle to watering wand. And an fast connection onto another hose or to add on a fertilizer sprayer. E-a-s-y to use. 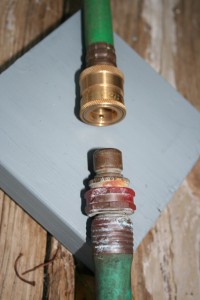 Looking at the photo, you pull back on the outside ring of the upper piece and the lower piece plugs in. Then you release and presto-sticko-togethero (as we say in classic Latin), an instant connection. Only Chubbie Checker regrets the no twisting and turning. At Ace Hardware.

Garden Cart: I like one called Foldit Cart. Weight 33 pounds. Balances up to a 330 pound load of dead weight. That could be your mother-in-law. Key word here is “balance” so you don’t need to go into traction, or become a drug addict, after a day of using it. Dumps easily. It has a retractable handle and folds up so it’ll fit in your trunk or into a small corner.  Or, due to being made of marine grade aluminum and stainless, it can stay out in the weather. Made in the USA. Depending on where you shop, $220 and up but sooo worth it! From Tipke

Pruning shears: These are today’s best “by-pass” shears. By-pass shears work like paper scissors work and that’s the action you want. These shears are now my number one favorite as they have gearing that decreases the pressure needed. Locking mechanism is thumb easy and positive. They are light in hand due to being made primarily of a composite – that doesn’t rust! Just use lithium grease to keep the few metal parts working easily and not rusting. From Fiskars. .

Note: Fiskars was founded in 1649 by an evidently tulip-phobic, cold and dark-loving Hollander who emigrated to Finland, started producing pig iron and smacking it to dickens, forming wrought iron (well named!) for tools. 363 years of practice! No wonder they build such consistently good stuff.

Onward. To further ease your misery of aging, don’t forget raised planting beds to lessen back pain. And if you have water piped direct to them, no carrying watering cans. Use mulch or landscape cloth to decrease the weeding. Ergo-garden-metric!

So students remember: why ergonometric tools? Were you just sleeping? The back-saver cart, two hand-saver shears and the easy grip trowel. Plus!, the quick-change hose connection eliminates having to wrist strain twist/screw things on and off. How many times do I have to repeat this stuff? No wonder 9 out of 10 chiropractors hate me.

Less work, less pain and more fun in the sun rather than under medical care.