Old school Jim from Richmond carrier-pidgeoned a message asking if I had any idea as to whether LED lighting technology was better than the early “slow-to-glow” CFLs (fluorescents). Actually his snarky phrase was “any improvement over the last fad?” He’d early-adopted the CFL bulbs when they’d come on the scene in the later 1990s, hated them and had regressed to regular (incandescent) bulbs. I should also mention that Jim is back to writing with a quill pen.

Henceforth, I called my hippy lighting engineer pal, Zorro Fox, for some enlightenment over light emitting diode bulbs (LEDs). Zorro’s opening comment was “Well, first of all, LEDs are very cool.” Turns out he means cool as in a February motorcycle trip to Vermont, not hip. Although, LED systems are also hip.

Anyway kiddies, LEDs are The Future. Get this. The bulb you install today, in most cases, will still  be glaring off your husband’s bald head when he’s changing your grandchild’s diapers. So if today’s average LED is lit for three hours a day (and average bulb life is 50,000+ hours) it will last thirty-six-plus years. This is lighting you want for your kitchen and every other room of your home.

A traditional regular incandescent spotlight (PAR bulb) of 45 watts will burn about 2,000 hours versus an LED replacement that will burn about 50,000 hours. In that 50,000 hours you’ll go up the ladder to change-out the bulb 25 times and pay out about $300.  Versus $25 for an LED with just one ladder trip. Electricity used? 8 watts versus 45 watts. See? No broken clavicle from flopping off a ladder, one fifth the power bill and no mercury and less shrapnel in the landfill.

Considering whole house use, there will be a lot more bucks in your Trip-to- Bali Fund because they estimate that by running twenty good ole incandescents over those same hours you’ll spend $5900 vs $1300 for LEDs. South Pacific adventures await.

Kitchens should be the first place that you go with using LEDs. No heat generated. Always instant-on! You want strips for under-cabinet lights to shine down on your work areas. Ceiling can lights over your island? LEDs both places. Bury LED strips in the soffit for an area overall glow. Deep lower cabinets can be fitted with LEDs to light up those caves. Glass door display cases can use LEDs. (if you dust a lot). IKEA sells LED lighted drawers. I love this concept. 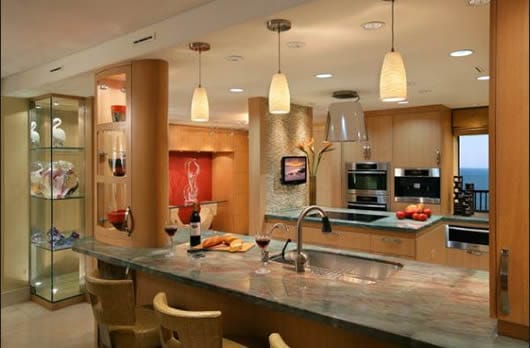 Shapes. I’ll give you shapes! LEDs come in spots, floods, (indoor/outdoor) old style lamp shapes, strips, tubes and decorative candles shapes. Many LEDs can be operated on a dimmer.

When shopping for these bulbs, think in lumens. Buying an LED alway requires reading the box for brightness output and warm/cool color output. Because we are used to thinking, “Well, 60 watts is the “brightness” that I know, I’ll buy a 60 watt bulb,” manufacturers are tending to reference your built-in knowledge of how bright 60 watts is vs. how many lumens. So they may say xx lumens equal xx watt output. Educate the elderly. But our kids will be thinking “I need 600 lumens for whatever task,” not 60 watts. Read again. There will be a quiz. Lumens are the key.

Forget thinking like Jim that all LEDs are harsh like the old CFLs. They aren’t. Some are warm (yellow) in intensity, others are cool (blue). Check the Kelvin rating on the box. This Kelvin does not refer to your mother’s idea of the perfect husband. A Kelvin ranking of 2700 means it’s warm/yellow and a 6500 means cool/blue. 4000 Kelvin is midrange. FYI: A good old 60w incandescent was about 3000 Kelvin. LED manufacturers are becoming very good with packaging. They aim to educate, so read the box.

Incandescents work by heating up a wire so it glows brightly. 90% of your electricity dollar goes to heat, 10% to light. Fluorescents work by lighting up gas but 80% is still wasted, only 20% makes light. LEDs are 80% light and 20% heat so that’s why they’re economical. LEDs are size of fleck of pepper and they are not naturally white. Different colors are mixed or covered with phosphor that makes them shine white. That’s why some bulbs have a yellow raincoat of phosphor. An Energy Star Seal means a 3-year bulb life guaranteed. You need to go shopping.

10 thoughts on “Best Lighting for Your Kitchen – LED”