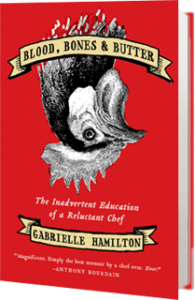 “To have my bare feet wedged into the crotches of tree branches — like they haven’t been for thirty years — makes me feel instantly, kinesthetically, very young again, as if the soles of my feet had memories of their own.”

The climactic scene from Gabrielle Hamilton’s splendid memoir Blood, Bones, and Butter finds the chef scaling trees — in a somewhat restless, reckless manner — in order to remove branches obscuring views of the sea from her mother-in-law’s decaying Italian villa. For me, that act and its description encapsulates themes that appear throughout the book — relationships/intimacy, sensuality, and a formidable independence and work ethic.

“Pruning” the trees plays on a childhood moniker and name of her celebrated New York restaurant, Prune. Born into an artsy, free-spirited Pennsylvania family Hamilton knew both the pleasures of nature and satisfying food. She relished the sophistication of her French-ballerina mother’s pantry and was proud that she could “get everything comestible from a shin or neck of some animal.”

Though Hamilton credits her mother with “everything I know, pretty much, about eating, cooking, and cleaning” their bond, enigmatically, dissolves. Likewise, her marriage lacks the conversations, disclosures, and sentiments essential for maintaining relationships. Even the affection for her husband’s family in Italy is, in the end, rewarded with something short of total acceptance.

I can recall several passages where Hamilton demonstrated a keen connection with her senses and surroundings, suggesting someone who is fully alive, aware, and credible as reporter of her own experience. For example, her husband-to-be first electrifies with the brush of his fingernail along her arm. “It was ballsy and accurate, that scratch; two qualities I find particularly appealing.” She later characterized nursing as leaving a mother feeling as if she “were being eaten alive, not in huge monster-gore chunks, but like a legion of soft benign caterpillars makes lace of a leaf.” 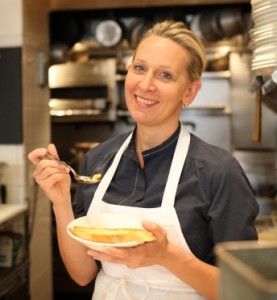 The hunger and privation Hamilton felt as a street-urchin student traveling through Europe influenced her menu and customer service philosophy. “There would be no foam and no ‘conceptual’ or ‘intellectual’ food; just the salty, sweet, starchy, brothy, crispy things one craves when one is actually hungry.” Perhaps that is why her chef colleagues enjoy congregating at Prune following their own kitchen shifts.

Blood, Bones, and Butter reveals the punishing grind that is catering and restaurant cooking. Hamilton is justly proud of her stamina, even working the most difficult stations at Prune with a baby delivery imminent. In one of my favorite sections she reluctantly participates in a conference called “Where are the Women,” held at a prestigious culinary school. Hamilton’s suggestion for success and recognition is simply to cook well.

Her fears materialize when fellow panelists reach for identity politics and essentialist arguments to explain the dearth of high-profile female chefs. The rebuttal, which she never delivered to the audience, included a parallel between running a restaurant and raising babies: “I thought of telling them how changing a diaper reminds me, every time, of trussing a chicken.” I admire the mash-up of great loves, cooking and her two sons.

One indicator of an author’s prowess is his/her ability to dialog with the reader. Hamilton’s authentic voice and candor drew me into a conversation, even occasional quarrel, with the text. Foodies may come for giuncata and orrechiette but should stay for generous portions of fine writing and rich biographical storytelling.