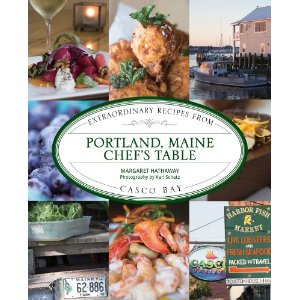 Anyone who has ever spent a table-hopping weekend or a longer culinary vacation in Portland, Maine, appreciates and wants to join the chorus of praise for that city’s reputation as a genuine eating town. Portland is famous for its restaurants, bakeries, coffee shops, seafood shacks, dives and diners. Like New Orleans, it’s hard to get a bad meal in that town. Portland’s proximity to the farms of southern Maine and to water (on both sides of the city) means that the range of fresh seasonal foods is impressive and what locavore-committed chefs can do with those ingredients has earned Portland chefs accolades world wide.

Can’t get to Portland this month for an autumn eating vacation? Then let Portland come to you with a new cookbook called Portland, Maine Chef’s Table by Margaret Hathaway. The author has collected recipes and background stories about the best and most engaging chefs in the city and the places where they cook. Those places range from a former Methodist church (Grace restaurant) to an old union hall to a former college dorm cafeteria. Expect to find recipes from Hugo’s, Duckfat, Local 188, Vignola and lots more.

Photographs in the book by Karl Schatz only make you want to eat at these restaurants all the more. Many of the recipes are long but, in general, they are not complicated. Just decide to invest a bit more time than usual to cooking from this book. This is not your book for 30-minute meals, but if you put in the effort you can turn out delicious things such as Maine Cassoulet, Maine Maple Gelato, House-Brined Corned Beef, Serrano Crab Cakes with Poblano Cream Sauce, Chicken Torchon with Red Onion Marmalade or Shortrib Ragu with Potato Gnocchi. The book also contains vegetarian and vegan recipes.

Hathaway also includes an excellent introduction to the Portland eating experience in explaining that “While the greatest concentration of Portland’s restaurants can be found on the peninsula that stretches from Munjoy Hill to the West End, the surrounding neighborhoods and small towns offer their own culinary delights,” the cookbook author says. “Across the Casco Bay Bridge, bakeries, brunch spots, gourmet takeout and seasonal ice cream and lobster shacks can be found in South Portland and Cape Elizabeth. To the north and west, ethnic markets abound.”

If you love to travel to eat, Portland, Maine is a destination that should be high on your list. Until you get there to experience the extraordinary cuisine diversity and creativity for yourself, here’s a recipe from a cookbook you’ll want to own and to give as gifts.

From Petite Jacqueline, a French bistro in the West End. Chef Steve Corry.

2 heads red leaf lettuce or salad greens of your choice

To make the dressing:Melt butter in a small saucepan over medium heat and cook until light brown. Strain through a fine

mesh strainer and set aside. Place remaining ingredients in a blender and process until smooth. Slowly add melted butter to the blender in a thin stream processing until mixture is fully incorporated. Store dressing at room temperature and warm before serving.

To roast the beets: Scrub and trim, leaving skin on. Preheat over to 400 degrees. Toss beets in olive oil, thyme and salt and wrap in two layers of aluminum foil. Roast for 45 minutes or until a fork is easily inserted into the center of the beet. Remove from oven and cool to room temperature before peeling and dicing.

To assemble the salad: Combine prepared beets, lettuce candied walnuts, blue cheese and celery in a large salad bowl. Before serving, toss with warmed vinaigrette and salt to taste.

Note: To make candied walnuts, (a two-step process): In a small saucepan over medium eat, combine ½ cup water with ½ cup sugar and heat until sugar is dissolved. Add ½ cup walnuts and poach nuts until candied all the way through. The nuts will begin to look translucent as they poach. To test for doneness, remove one, cool and taste. Strain and let rest until cool. Toss cooled walnuts in 3 tablespoons of sugar. In a large skillet, heat ½ cup vegetable oil to 350 degrees. Fry candied walnuts until dark brown, then remove from oil and let rest until cool.