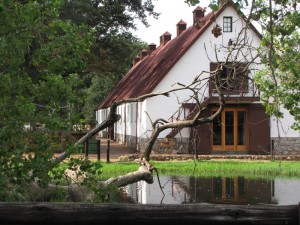 The place where I went to summer scout camp was in the Centurion countryside between Pretoria and Johannesburg in South Africa, a place called Irene Dairy Farms.

In more recent times Irene Dairy Farms has undergone gentrification though very little physical renovation, now featuring not only a small gourmet market, but also a charming restaurant with indoor dining in case of bad weather, but primarily at tables on gravel, under 130 year old oak trees.

Well-schooled waiters crunch to and fro delivering a broad spectrum of country-style dishes from a constantly changing menu, while on the other side of a low sandstone wall, shift after shift of large Friesland cows lumber into the milking shed apparently knowing by habit, just when they need to be there – entering by one door, then later exiting through another on their lugubrious way back to the pastures. 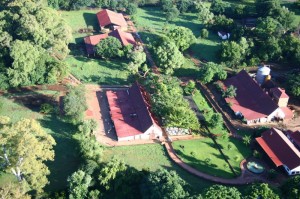 People go to Irene Farms for a weekend getaway to play golf (two courses), enjoy the nature preserve, museum and to feel like something remains of the enterprise’s origin in 1889 that might connect them with nature and a pastoral vacation.

Apart from the addition of modern amenities little has changed at the farm. It remains the same highly organized dairy business it was when I first visited some 50 years ago, as a boy scout, attending a weekend camp which the owners traditionally allowed to be held in one of the fields. Unlike modern American camps, this was a somewhat more primitive operation, especially when it came to activities, accommodations (none), and especially sustenance.

The day began with the younger campers collecting firewood from the surroundings for the evening bonfire around which we would eat, sing, and sleep, while the more senior scouts engaged themselves with building an apparently obligatory rope bridge across a close-by stream. It was a scene of some chaos, including the bridge builders somehow managing to set an old tree on fire – a conflagration which needed extinguishing not only at the time, but later, at various junctures throughout the very long night that followed. 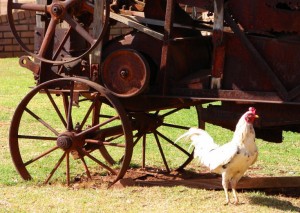 All these matters, camp songs, fire, and cold hard earth to sleep on aside, it is the dinner that stands out most vividly in my memory. We would, it was announced, be enjoying Tomato Breedie-Bread, a dish I was certain my mother had never prepared, and one I awaited impatiently, what with we campers having inexplicably been expected to skip lunch and all, there being the myriad important activities needing to be attended to – and time being so short.

This loudly trumpeted culinary triumph turned out to be so cheap and simple as to be absurd, though impossible to forget.

Chop both onions and tomatoes. Place them in a pot with liquid of choice and locate adjacent but not too close to that same fire that campers would be sleeping around later, and allow to boil. Hand out indiscriminately sized chunks of bread (to be toasted on sticks, or not, as you choose), then deposit in that combination plate-knife-fork-spoon kit so familiar to any camper, the contents of the bubbling pot. Ladle mixture over the lump of bread. Dinner.

The only addition would be coffee, served after, and made by boiling coarse grounds in a cheesecloth bag next to that same fire and served with plenty of sugar, just before all the obligatory campfire singing starts in earnest. It is perfectly possible create this whole scenario (including dinner) at home. I tried it.

Following the camp weekend I attempted to duplicate the experience for my parents, right there in our kitchen, using the Aga coal stove rather than a fire. They were indulgent though appalled, having incorrectly presumed that campers (yes there had been a fee paid for the event), would have been at least partially fed over the weekend.

Instead, we had subsisted on that proffered Breedie-Bread fare, then been repeatedly roused from our supposed, thanks to that coffee, slumbers in order to fight the stubborn little conflagration which threatened the entire dairy, this due to our very own Eagle Scouts, who had successfully built their bridge across the stream, but at the same time had (as previously mentioned), somehow set the woods ablaze..

Not too many badges were awarded that weekend, but to this day, every now and again, and much to my bride’s dismay, I indulge myself with Tomato Breedie-Bread, usually for breakfast, not for dinner.