Earlier this year I had the pleasure of visiting Copenhagen, Denmark. A small country north of Germany south of Sweden, Denmark has a culture and charm all its own. I was looking forward to experiencing their restaurants as well as their culture. Scandinavian countries are not particularly well known abroad for their cuisine, so I had no idea what to expect when visiting this small, quaint, and famously happy nation.

Walking from the train station after my journey by way of Stockholm, I wanted to first see Nyhavn, the most photographed and famous part of Copenhagen. The colorful painted houses mostly operate as restaurants and serve up traditional Danish meals.  Numerous street vendors along the way boasted traditional Danish street hot dogs…extra-long dogs that refuse to conform to the boundaries set for them by their accompanying petite buns. Topped with crunchy fried onions, pickles, and a range of sauces, these are not to be missed, even if they are your breakfast! Once in Nyhavn, I settled into a quaint waterfront café for some beer and Rugbrød, a traditional Danish rye bread with a particularly hearty and pleasing texture. Rugbrød tastes and feels so healthy, that it somehow tricks you into not feeling guilty for eating the carbs it happily serves up. 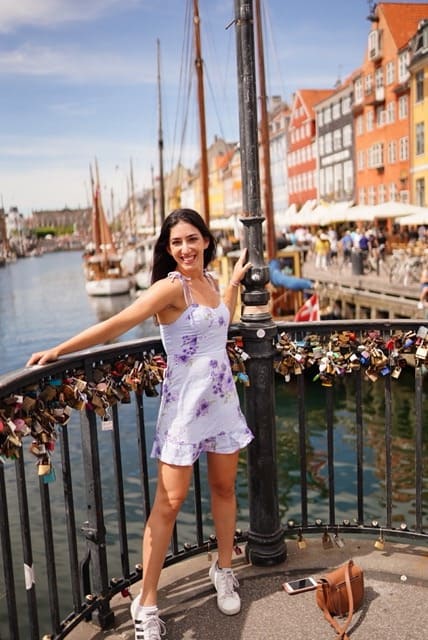 After spending the day wandering around the streets and canals of Copenhagen, visiting various tourist attractions like forts and castles, I decided I had earned the privilege of indulging in only desserts and pastries the next day; after all, I was on vacation! While there are not necessarily any diets or healthcare professionals that condone or promote “dessert only” meal plans, let me be the first to say, Denmark is THE place to consider attempting such a regimen. I went into the first bakery I encountered and ordered a cardamom bun and a beautiful chocolate pastry filled with marzipan, ganache, and strawberries. The Danes like to put marzipan into as many things as possible and I can only imagine that this wanton use of marzipan is a primary driver of their high levels of overall happiness as a nation.

I had never considered adding cardamom, an ingredient I thought was normally reserved for Turkish and Middle Eastern savory dishes, into a sweet dessert. Scandinavian cardamom buns are understated yet lovely mixtures of butter, flour, sugar, and cardamom that come together to make perfect little moist pastries that would make Paula Deen weep in shame. After experiencing them once, you will never look at butter or cardamom the same way again. 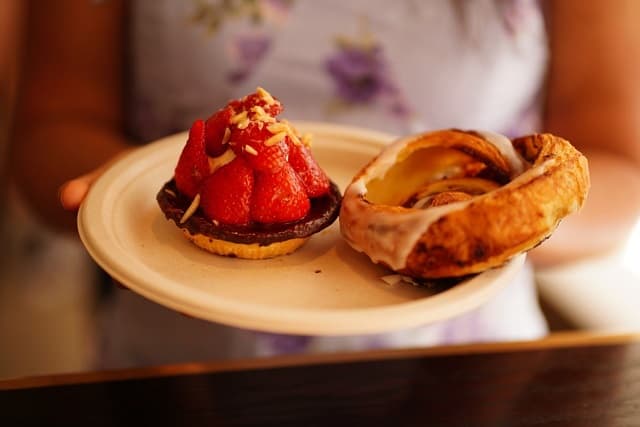 One day of desserts somehow became several days of indulging in exclusively desserts and pastries. After all, there are as many tempting bakeries in Copenhagen as there are fast food joints in America. Realizing I needed to relax my strict adherence to this new dessert diet, I decided to change things up and go to Punk Royale for dinner. This is an avant-garde restaurant in Copenhagen (also in Stockholm), where there are only about 3-4 tables. The chef will randomly come to your table, shout loudly at you to open your mouth, and proceed to shove heaping handfuls of black caviar into your mouth (you eat with your hands here, like the dirty little creature you are). If there is a heaven, I can only imagine that this is EXACTLY what regularly happens to all the heavenly angels floating above us.

After seeing my childlike joy at being assaulted with black caviar, the chef decided to bring an entire KILO jar of black caviar to my table. He told me I could have as much as I liked, and he also made sure to supplement it with generous pours of vodka that I had not asked for nor ordered. The whole experience felt like I had fallen into a rabbit hole and found a new reality, better than my own. I hope to one day make my way back to this magical restaurant, where caviar appears to have no price tag and vodka seems to have been confused with water by the chef/owner. 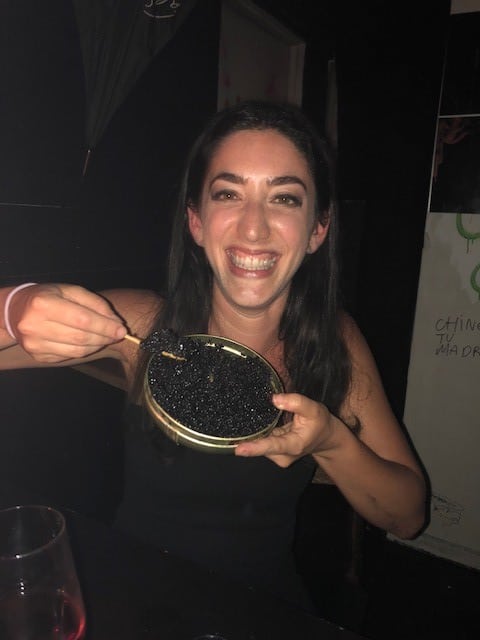 I would be remiss to write about Danish food and not mention their smörgåsbord sandwiches, which are small open face sandwiches that are often eaten as the equivalent of ‘fast casual’ food in Denmark. Each little sandwich is a beautiful work of art, with mixtures of colors, textures and flavors that say: “I love you. I want you to be happy. I am here to bring you joy.”  The seemingly endless selection included egg and shrimp garnished with roe and remoulade; smoked salmon decorated with lemon, dill, capers and onions; and even Thanksgiving-themed sandwiches filled with turkey, cranberries, pate, and crunchy crackers as well as roast beef with thin-sliced beef nestled on dark rye bread, topped with remoulade, shredded horseradish and toasted onion. Despite the US dollar being significantly weaker than the Danish Kroner, the siren song of these smörgåsbord sandwiches told me to open my wallet and never close it again, which I was happy to do to gain access to these joyful little Danish works of art. 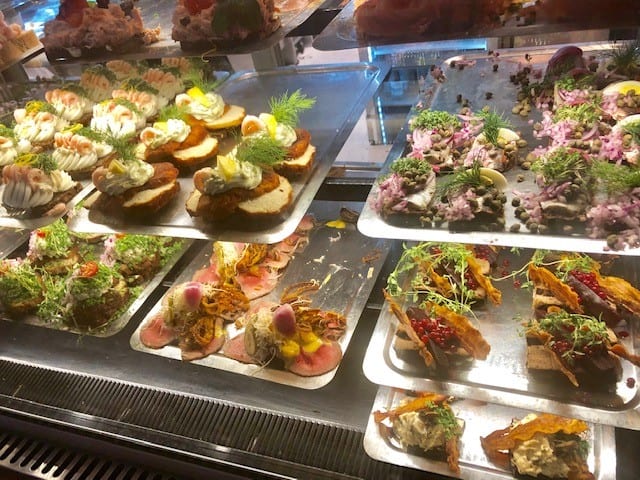 There were many aspects of Denmark in addition to their food that I loved, like their plethora of biking adventures, the presence of a free and independent city state called Christiania located just over the bridge from their most photographed tourist attraction where nothing appeared to be illegal, and their beautiful museums and waterfront vistas. But I will have to save these for my next article. Until then, I will attempt to recreate their open-faced sandwiches and cardamom filled pastries in my own kitchen, always making sure to live by their hedonistic virtue of recklessly sneaking marzipan into almost every dish from now on!

Joan Cooper – A native of Florida, Joan has lived in the mid Atlantic for the past 8 years. She has traveled extensively across Europe, South America, the Middle East, Africa and Asia, learning about the cuisines of each region along the way. She thinks that the mid Atlantic region has an amazing variety of dining options and offers a unique flavor that no other part of the country can offer!