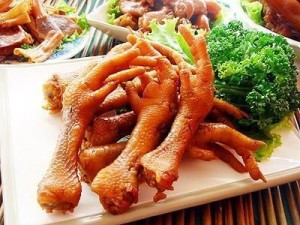 I happened to be browsing the well-stocked Mexican supermarket near a gas station in my town, when I looked into their meat case and noticed a really nice pile of chicken feet.

I will presume that most of us have at least seen pictures of the various ways that Asian, and indeed most countries in the world prepare chicken feet, ranging from smoked over aromatic woods to frying with different sauces then served as crunchy appetizers. My own experience with the dish is humbler by far.

Thanks to the draconian atmosphere surrounding South African race relations when I was growing up in that country, the many black servants without whom any rural household could not move forward, had to be housed under a separate roof than that of the white family. As a young white male, largely unsupervised for much of the day, I was expected to maintain a respectful distance from these habitations so conveniently attached to the garage. 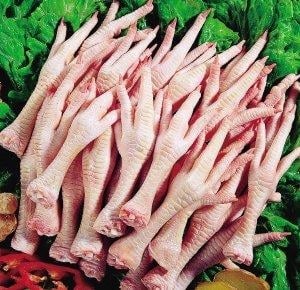 On the other hand, it was difficult for that growing boy, who was expected, as a latchkey youth, to somehow forage for himself in a generally barren kitchen, not to notice when those good folk settled down to eat whatever it was they did. Hunger is one of the great levelers in any social situation.

One afternoon I came upon our group just as they made ready to eat – squatted on the bare ground outside the door to their habitation. These were, and are now too, an extremely polite people – and so it was automatic that I should be included in the group – this even though, as a member of the white and dominant race, such inclusion was an anathema.

The dish, with two chicken feet stewed along with onions, potatoes, and spices the names of which I do not know, was accompanied by a large bowl of stiff corn porridge, a staple of the African diet. There were no utensils, hands being conveniently placed at the ends of all our arms. A ball of porridge would be taken from the bowl, dexterously rolled into a compact ball, then dipped into the pan, more for taste than substance. It was delicious. 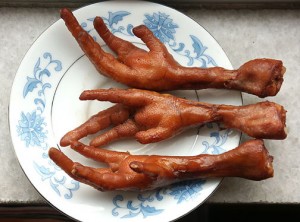 Staring into the chicken-feet meat display I wondered whether I dared to attempt replication of that dish. The spicing would be simple – garlic, curry, pepper, maybe oregano – but what of the cheap frying pan, the taste of the open coals, and the smell of that red dust where we had crouched? Perhaps the biggest question would be whether or not I could overcome the handicap of my own sophistication.

I was, of course, unable to resist attempting the dish, and subsequently went shopping. Displaying uncharacteristic restraint, I passed on the green chile pork, which is always excellent, and settling instead for a couple of chicerones, and four chicken feet.

Once home, as I was browning the feet in a little lamb fat, I stepped outside, leaving the kitchen door open. An errant breeze wafted some of the smell out to me, and in that instant the veils of time dissolved. I was transported back to my youth by the central core aroma of Sub-Saharan cooking: sizzling chicken feet. I could have wept – but chose to be manly instead.