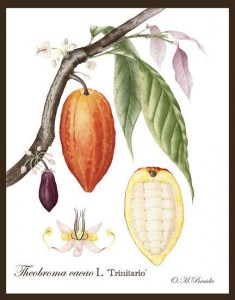 As a botanical artist, traveler and lover of the taste of chocolate, my talent and taste buds come together when I work on a series of paintings that illustrate the chocolate tree, its flower and especially its pod (the part that produces the bean that results in chocolate). I respond to the complexity of the plant, its vibrant colors and challenging textural values. In terms of eating chocolate, my personal preference is for dark chocolate. The very darkest! I am also vegetarian and allergic to cow’s milk.

Most chocolate in America is made with some amount of milk. But, in France I discovered that many chocolate shops offer milk-free chocolate. On a visit to Paris with my husband we encountered a wonderful chocolate store, Debauve & Gallais, http://www.debauveandgallais.com. We each bought a bag of chocolate and went back to our hotel room. While my husband took a shower, I got a head start nibbling the chocolate. When he came into the bedroom, he saw me sitting on the bed, cross-legged with the wrappers of both bags – empty.

Upon hearing this story a friend sent me chocolates from Servant – Le Confiseur D’Auteuil, http://www.chocolaterie-servant.com. It was a complete selection called Coffret Chocolats Pure origin. My favorite chocolate from that assortment was from the Dominican Republic. If you love rich, pure chocolate you’ll want to check out these Web sites and order some for yourself. And you may want to learn some of the history of chocolate. I did when I traveled to a cacao plantation in the Dominican Republic and first started to paint the plant. I’ll be doing study there is 2011.
Theobroma cacao, the tree that produces chocolate, is a small evergreen tree native to tropical South America, but now cultivated throughout the tropics. 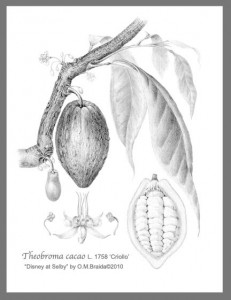 Cacoa has been used for more that 2,000 years and is said to be native to the upper Orinoco-Amazon region Venezuela). Mayan people were the first to grow cacao on large plantations as early as 600AD. By 1000AD the peoples of Central America used the beans of the cacao as money. The seeds of this tree were made into a warm spicy drink that the Mayan called “xocaotl,” which was roasted cacao beans ground and mixed with chilis, cornmeal and water. Later, Aztecs added vanilla to sweeten.

In 1502AD Christopher Columbus tasted “xocaotl” during his fourth voyage to America and returned to Spain with cacao beans. The Spanish conqueror of Mexico, Hernán Cortéz, understood Montezuma’s reverence for the cacao tree and why it was considered a food for the gods. He established a cacao plantation in Mexico and brought the beans back to Spain in 1528 where they were hidden in Spanish monasteries and sold only to the rich.

In 1615, it was Anne of Austria, a Spanish princess, married Louis XIII of France who spilled the beans! It wasn’t long afterward that news of drinking chocolate reached England. In 1657 the first chocolate house opened in England. The first solid chocolate “stick” was introduced in 1674. The first chocolate bar was created in 1847. In 1907 the Hershey Kiss was born and wrapped in foil. 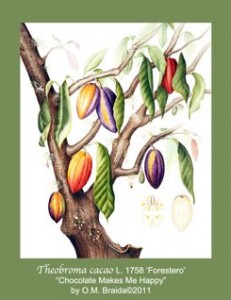 There are three main cultivars of the cacao tree used to make cocoa and chocolate – Criollo, Forastero, and Trinitario.

Criollo is the most prized but only 10% of worldwide chocolate production is made from this aromatic cultivar. Beans from the most popular Forastero trees are hardier and account for 80% of the world’s chocolate. Trinitario, is a hybrid of Criollo and Forastero. It is used in 10% of chocolate production. The flowers are produced in clusters directly on the trunk and older branches of the cacao tree. The flowers resemble orchids and are lovely. Out of all of the flowers on the tree, only three out of 1000 flowers actually get pollinated to become the cocoa pod fruit. It takes about six months for the flower to blossom into a mature fruit. A ripe pod can be left on a tree for up to three weeks. The fleshy casing has the density and texture of an apple. Inside the sticky pulp of the cocoa pod is edible. It doesn’t taste like chocolate but
like a ripe persimmon. The bean is where the cocoa comes from.

Mix the dry ingredients in a large bowl. Add the wet ingredients. Stir briskly until smooth and consistent. Bake two greased, floured pans at 350 degrees for 30 minutes. Makes two layers of a two-layer 9-inch or 8-inch round cake,
or one small sheet cake. When cool, frost it (vegan icing, of course!), and layer. Voila et bon appetit!

To find out more about Olivia and to view more of her work:

3 thoughts on “Chocolate, Food of the Gods (and you too)”