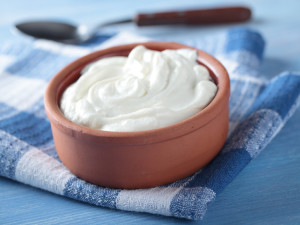 The past few years have witnessed a sweets trend that included donuts, cupcakes and whoopee pies. Expect the year 2014 to trend a bit lighter. One of the of the reasons is obesity awareness and greater knowledge of what too much sugar and cholesterol can do. While the sweet tooth is probably never going to depart most of our senses, lighter, more refreshing desserts are on the way. And smaller portions are part of the package.

Look for bite-size cakes and miniature chocolate mousse cups at many restaurants like Carrabbas and Season’s 52. Greek yogurt sauces will replace frosting and you see many more gluten free options on menus. (Hopefully Starbucks at airports will jump on this trend and offer guest gluten-free sweets for the busy traveler who wants to have a sweet treat that doesn’t make you feel bloated). 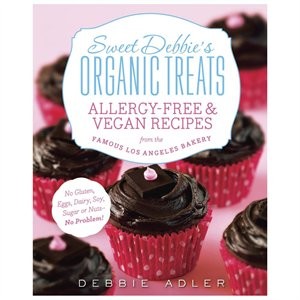 Muffins are going to be passé while date and nut bars are going to be mainstream in bakeries. Coconut oil will replace those awful trans-fat oils. Butter is back but look for Paleo-friendly clarified butter in recipes and butter from France and Ireland that come from grass-fed cows. Organic sugars and local honey will replace the white refined sugar bags in some finer bakeries and I certainly hope in most home pantries as well.

Serving desserts in mall mason jars will continue to trend in 2014.

Vegan desserts in jars by Kris Holechek Peters offers recipes like Plum-berry jam and S’Mores in a jar for a twist on the campfire classic. 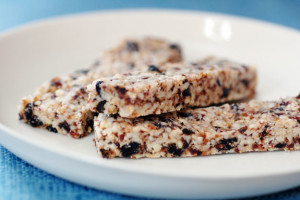 Preheat oven to 300 degrees. Line a 15 x 10-inch jelly roll pan with parchment paper, with a little extra over the sides. Mix together the oats, flour, coconut chips, sunflower seeds, cacao powder, chia seeds, guar gum and salt in a large bowl. Microwave the coconut oil and coconut nectar in a 2-cup measuring cup for 60 seconds. Add stevia and stir to combine. Pour into the oats mixture and mix well. Fold in the cranberries.

Spoon the batter into the prepared pan and smooth it into the corners and top with a wet baking spatula to cover the pan evenly. Bake for 25-30 minutes or until the kitchen smells like chocolate and toasted oats. Rotate the pan from front to back halfway through baking. Transfer the pan from the oven to a cooling rack and let sit for about 15 minutes before putting in the freezer for at least an hour. Transfer the parchment paper to a cutting board and cut into 25 bars. Wrap each bar in parchment paper and place in resealable plastic bag in freezer and keep frozen until ready to pack or eat.

Whether you are serving brunch or setting a sweet buffet, this Cooking Light recipe is one that I keep around for festive occasions. Make it a little lighter with 2% milk, you may top the warm pudding with fat-free whipped topping or use Stevia instead of sugar. 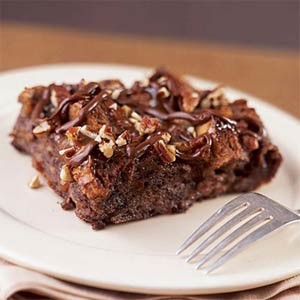 2 tablespoons sugar or equivalent of Stevia

Preheat oven to 350 degrees. Spray food release spray into custard cups or ramekins. Arrange bread cubes in single layer on a baking sheet. Bake for 5 minutes or until toasted. Remove bread from oven and decrease temperature to 325 degrees. Combine milk and the next 5 ingredients in a medium bowl, stirring well with a whisk. Add bread, toss gently to coat and cover. Chill 1-4 hours. Divide half of the bread mixture evenly between 2  6 ounce ramekins or custard cups that are greased with food spray or butter. Sprinkle evenly with half the chocolate. Divide remaining bread mixture between ramekins and top with remaining chocolate. Place ramekins in an 8 inch square baking pan. Add hot water to pan in the depth of 1 inch. Bake at 325 degrees for 35 minutes. Serve warm with whipped cream, chocolate shavings and dried cherries as garnish and mint sprig.

1/2 teaspoon ground cinnamon, or to taste

Stir yogurt, vanilla extract, cinnamon, and stevia together in a small bowl. Add apples and toss to coat. Refrigerate for about 15 minutes before serving. Divide into 2 mason jars- serve with organic raisins and chopped raw almonds.