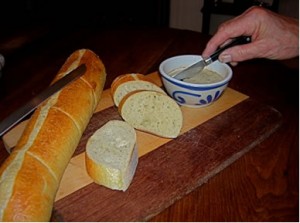 This past holiday season my American wife and I, perhaps less health conscious than usual, indulged, along with mother, in an oversized standing rib roast which produced, quite apart from the delicious meat, copious quantities of renderings, or drippings. Most Americans fail to understand why the British hoard these aforementioned offerings from heaven – but that we do, understanding as others might not, the myriad resultant tasty possibilities.

One of the highlights of my now distant youth, culinary-speaking, was drippings on toast. For the uninitiated, this British indulgence consists of: spreading a combination of the fat and gelatin rendered from either roast beef, or even better, lamb, on toast or bread as a sandwich, seasoned usually with salt and pepper, though any spices in the cupboard can only add to the gastronomic pleasure. To properly collect drippings you pour the contents of the roasting pan into a container which you then store in the refrigerator. As far as I know this is the only way to procure drippings. Personally, I have never seen drippings on a breakfast restaurant menu in England, nor is it available in any grocery store I’ve ever frequented. You want drippings, you make your own. 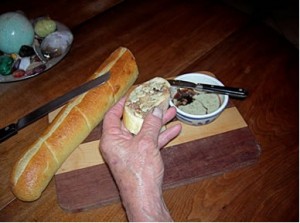 The trick with the ideal consumption lies in proportions. With drippings there is always more fat than gelatin, and even though said fat is tasty in it’s own right, the gelatin is the really rare stuff. As a result, it is necessary to project as accurately as possible, just how much of each – drippings and gelatin – should be applied to the vehicle of choice, be it a sandwich, or even breakfast toast, so that quantities of both shrink in direct relation, one to the other. It takes practice. But, eventually your palate and your knife will find harmony.

These days, not only for fiscal reasons, I tailor my reading according to availability at the Gulf Gate Library used book store. I find it easier to branch into unknown and possibly treacherous literary waters when I have but $2, as opposed to say $20 at stake. Call me a man of cheap risks if you will – but I have found some very serious nuggets this way.

One such, though I declined to buy it, made me smile remembering Frank McCourt, author of Angela’s Ashes, and how we met in Key West at the literary seminar there – this fairly shortly before his death. It was one reference in particular which had caught my attention, that being to “drippings,” which were, in his early years, growing up in Ireland, the only form of meat that the children ever experienced.

My own encounters with this delicacy stem from far more pleasurable experiences, and yet they have formed between not only he and I, but all British people wherever they may be, an unbreakable bond – disparate circumstances notwithstanding. 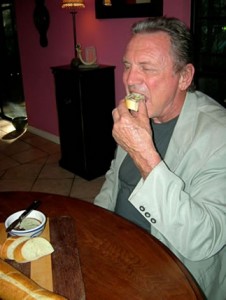 I am perfectly willing to concede that as a diet, drippings would, if consumed to excess, almost certainly lead to an early physical decline, if not death. Rather like rock-climbing, or parachuting, the regular indulgence in drippings on toast is not for the faint of heart but then, nor is life itself. Where would we be were it not for those willing to risk all? This is especially true in the world of those who eat drippings.

While we are on the subject of diets designed to kill the average human – be it slowly or less so: we should, at some point, discuss the trick of a complete English breakfast as prepared in a single pan … then again, maybe another day!

Editor’s note: If you don’t want to eat your drippings straight, try using drippings in this classic English recipe for Popovers. The perfect accompaniment to roast beef.

6 to 8 tablespoons drippings from roasting pan

In a large bowl, combine flour, salt, and pepper. Make a well in the center, and add eggs and 1/4 of the milk. Using a whisk, combine eggs and milk, then incorporate flour; begin with the inner rim of the well. Continue whisking until a smooth, stiff batter forms. Stir in half of the remaining milk. Cover with plastic wrap and let stand at room temperature for 30 minuutes. Heat oven to 400 degrees. Place 12 3/4-cup capacity muffin tins in oven until very hot, about 5 minutes.

Stir enough of the remaining milk into the batter until it is the consistency of heavy cream. Transfer 1 to 2 teaspoons of drippings into each muffin tin. Pour batter in the muffin tins, filling them about one-third full; the batter should sizzle in the hot drippings. Return to oven and bake until puffed, browned, and crisp, 25 to 30 minutes. Yorkshire pudding is best served fresh from the oven, but it can be kept warm in a low oven for about 15 minutes.