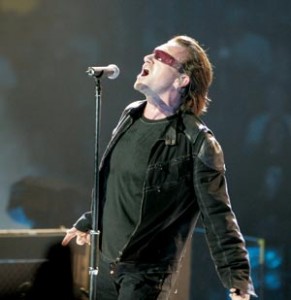 Tourists flock Ireland to see the ruins, castles, rugged scenery, the lively city of Dublin, formal gardens and to enjoy traditional music and the company of the of friendliest people anywhere. Then there’s Ireland’s most famous export – the phenomenally popular rock band U2 and its leader Bono. You hear U2 music everywhere in Ireland and Bono (Paul David Hewson) is Dublin born and raised and he lives in a Dublin suburb.

Not many tourists think they will encounter great food in Ireland and that’s because here in the US the food press trots out simply dreadful recipes for Saint Patrick’s Day food stories. You’d think everyone in Ireland subsisted on corned beef and cabbage with a side soda bread. Makes you wonder if St. Patrick drove tastebuds out of Ireland along with the snakes.

If you go to Ireland, be prepared to be dazzled by the food in pubs, casual bistros or fine-dining restaurants, many of them situated in Ireland’s better hotels. Ireland, like England and Australia, underwent a culinary revolution about a decade ago based on local fresh seasonal ingredients, fusion techniques and a global attitude about what’s exciting to eat.

Ireland was in the vanguard of the locavore and farm-to-table trends and the results are amazing. Chefs such as Ross Lewis (his restaurant is Chapter One in Dublin) who cooked for the Queen of England when she made her State visit to Ireland recently, Kevin Thornton, Eamonn O’Reilley, Derry Clarke and television celebrity chef/cookbook author Rachel Allen are just some of the top chefs in Ireland whose food you will want to experience.

What you want to eat in Ireland, and what top chefs there are getting creative with, are the foods that are local to the island – lamb, Angus beef, salmon, duck, prawns, bacon, oysters, wild mushrooms, artisan cheeses, cod, halibut and hake, homemade breads, jams and sauces made with local blueberries (small and sweet) and strawberries.

Caster sugar, treacle, Guinness, peas, bacon and artisan cheeses… If you buy cookbooks in Ireland so that you can prepare your favorite vacation meal at home, remember that you’ll need a conversion chart to translate ounces and grams to cups and tablespoons. Also, many Irish recipes call for caster sugar, which is a superfine white sugar that melts more rapidly than plain white granulated sugar making puddings or a mousse extra smooth. It’s also good for homemade lemonade, iced tea and other beverages where you want a quick dissolve. Some supermarkets sell caster sugar (Domino Superfine) or you can make your own caster sugar by grinding up white sugar in a coffee grinder.

Treacle is a dark cane sugar syrup similar to molasses. Some US supermarkets and specialty stores sell cans of treacle. If you can’t find it, just use molasses.

Guinness doesn’t travel well. This dark, rich stout tastes creamier and much more complex when the barman pulls a pint of draft Guinness in Ireland in any pub or restaurant. Don’t sip it. Guinness is meant to be savored in little (or big) gulps. In America, use bottled Guinness to brace your favorite beef stew recipe.

Irish bacon and Irish butter are a revelation. Once you savor both, it’s hard to return to what passes for bacon and butter in America. And the variety of yeast and loaf breads are worth exploring. All of them are calorie laden and have the option of being even richer tasting when you add Irish butter or clotted cream or fresh-made jam. Just do it.

Meadows, hillsides, homeowners yards and rural roads are pretty much blanketed with sheep and cows in some parts of Ireland. So where’s the local artisan cheese? Don’t look in supermarkets. Go to the village butcher shop. In cities or larger villages you’ll find specialty cheese shops that offer local cheese varieties. A loaf of fresh bread, a pint of draft Guinness, two kinds of local cheese and you got yourself a mighty fine lunch.

The Irish, like the English, have a fondness for fresh-cooked mashed peas that chefs often spike with mint or some other herb. What appears to be a puddle of green baby-food on the plate, actually does taste better than it looks. Just the same, mashed peas are a hard sell to American eaters. 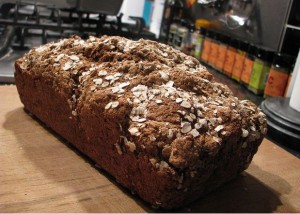 Preheat oven to 350-degrees. In a saucepan, melt the butter in the water. In a bowl mix together the treacle, sugar and beaten egg. Sift together the flour, ginger, spice and soda and ad to the treacle mixture. Fold in dried fruit and mix thoroughly. Stir in the butter/water mixture. Turn into a two-pound loaf tin (greased and floured) and bake for one and a half to two hours, covering the top with foil if the loaf appears to be browning too quickly. Test with toothpick. If it comes out clean, it done. Cool in the pan for five minutes, then turn out onto a wire rack. Served sliced, plain or with butter.

This dish is excellent served with couscous for a main course. It’s also good in a hot pita pocket with yogurt and lettuce for a great sandwich. Serve hot, cold or at room temperature.

Heat oil in a hot saute pan, toss in the meat and season with salt and pepper. Add the cumin and coriander and cook over a high heat for 5 minutes, then add the pine nuts, hummus, raisins and chopped coriander. Stir to mix and let simmer for 1 minute. Season to taste and enjoy.

Try and find large, plump Medjool dates for this recipe. This recipe can be made a day ahead and then re-heated in the oven at 350 degrees for 8 to 10 minutes or until hot in the center.

Preheat oven to 350-degrees. Butter the bread, leaving 4 slices whole and cutting the remaining 6 slices in half to make triangles. Grease the sides and base of an 8-inch square baking dish. Place the 4 whole slices of bread buttered side up on the base of the ovenproof dish, then sprinkle the chopped dates over the top. Arrange the triangles of bread buttered side up on top to cover the dates.

Heat the cream and milk in a saucepan almost to the boil. While it heats up, whisk the eggs, sugar and vanilla in a heatproof bowl, then pour the very hot milk and cream on top, whisking as you pour. Pour this custard over the bread, and allow to soak for 20 minutes. Sprinkle brown sugar over bread. Place the baking dish in a large roasting pan and carefully pour in enough hot water into the roasting pan to come halfway up the sides of the baking dish. Bake in the oven for 50 minutes to 1 hour or until the top is golden and the center just set. Serve with Boozy Toffee Sauce and some softly whipped cream.

Place the butter, sugar and cream in a saucepan and bring to the boil, stirring all the time. Boil for 4 minutes or until the sauce has thickened. Remove the pan from the heat, allow to cool for 1 minute, then add the brandy and sherry. Makes 1 3/4 cups.

5 thoughts on “Eating in the Land of U2”