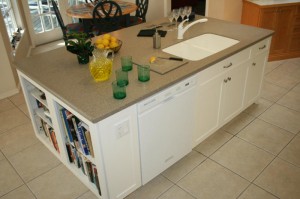 “Are you going to be landing aircraft on this island?” he asks. Someone is thinking my kitchen island concept is a trifle grandiose. Admittedly there wasn’t even a small island there before the renovation, so that someone is also thinking “really stupid idea.”

In my mind the final kitchen design was pretty much firm. But because the electric service AND the plumbing were going to have to be moved AND the proposed new counter acreage was beyond my skills, the total renovation of the kitchen led us to a kitchen cabinet company, rather than to SVP, the locally acknowledged (i.e. with the family) Destruction and Rebuild expert. Plus several snide remarks by “a local resident” who wanted the kitchen redo started and finished in the same decade. Always these petty demands from us Artistes.

Anyway, this aviation question is coming from the Kitchens-Are-Us doubting staff designer.

“Ha-ha” snorted bitter me, having being cheated out of wielding a crowbar. “Live and learn, young inexperienced lad.” 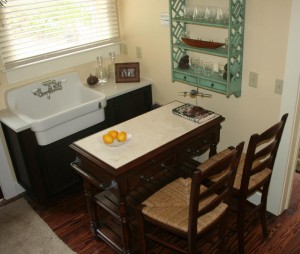 Our house has a living room where we don’t live. Museum-esque is its role, although every year during our annual Holiday party several people are allowed to line up in there while waiting to get into the kitchen and the adjoining gathering room, which is where we really live. Thus, a big and convenient kitchen is important to everyday life in our house.

Since the original design of our kitchen area had a U-shape counter (and a lot of empty space in the middle of the room), I knew an island would give us more efficient real estate. The mind of Michelangelo at work is so beautiful.

My completed island is 27-square-feet of surface. Sink, dishwasher and a cabinet face the cooking area. On the other side are full cabinets with pull out shelves and drawers over. At the end, facing the seating area and television screen, is the cookbook corral – deep and high shelving because cookbooks come in awkward sizes. Seriously, if I somehow got stranded on my island, I’d have everything I need. 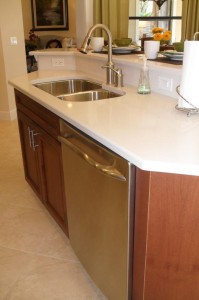 This island is frequently Buffet City. String those plates, napkins, utensils and serving pieces along here and an obviously undernourished parade of eager neighbors sails smoothly by foraging as they proceed. The island is only six steps from the cooktop and oven. Food moves efficiently from prep area to serving island and nothing gets cold. Electric outlets at each end for warmers, well-lighted from above and, for you neurotics, clean-up is so easy as the crumbs sweep right into the Corian sink.

Buffet-ing on, go bold and get a runner for the whole length and you’re in decor mode. Call me fowl but chicken wire or screen sprayed the color of the season works. Or traditional fabric in colors and patterns that reinforce your menu theme. Centerpieces can sit among the serving plates or behind them. Candles, real or LEDs, work here, high or low. Florals or decorative objects establish the ambience. Remember to work your decor in-the-round because it can be seen from all angles.

But enough about my brilliance. What if you just haven’t got the space for incoming aircraft? Well, go smaller! Think about a roll-out piece for when you need it. Or a smaller island with two levels for three functions: food prep, meals and buffet service. Go on an Internet prowl for ideas.