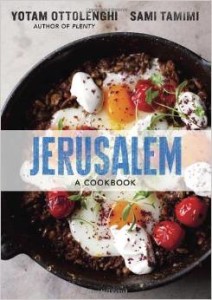 In preparation for an upcoming trip to Israel that will focus on ways that social harmony might be achieved through a celebration of the many wonderful elements that make up the food culture of the region, I’ve been reading the illuminating and optimistic cookbook Jerusalem by Yotam Ottolenghi and Sami Tamimi. Both cooks grew up in Jerusalem in the 1970s and 80s, but didn’t meet until they were young adults working in London. They discovered their parallel histories, became close friends and eventually business partners.

Sami Tamimi is a Muslim who was raised in a food-centric household in East Jerusalem. Yotam Ottolenghi, a Jew, was raised in West Jerusalem. One of the things they realized when they met and started cooking together is that much of what they ate as children was strikingly similar. Same ingredients, different names, a few different spices, but essentially the same.

They decided to do in-depth research explore their culinary roots and to unravel the diverse threads that make up the complex culinary tapestry of Israel and Jerusalem in particular. They found centuries of overlapping cuisine traditions stemming from Libyan Jews (who absorbed Italian influences before settling in Israel), Hasidic Jews from Poland, Tunisian Jews, and Jews from Argentina, Lithuania, Romania, Germany and southern India. Recipes from those places came to Israel and merged with local ingredients to add to the culinary diversity. Then there the vast and diverse culinary traditions of the Arabs (both Muslim and Christian) as well as Greeks, Ethiopian Copts, and more. Can there be common recipes and common ways of preparing dishes that are recognizable from one group to another?

The authors of this book, Jerusalem, say yes. “Everybody, absolutely everybody, uses chopped cucumber and tomatoes to create an Arab salad or an Israeli salad,” say Ottolenghi and Tamimi. “Stuffed vegetables with rice or rice and meat also appear on almost every dinner table, as does an array of pickled vegetables. Extensive use of olive oil, lemon juice, and olives is also commonplace. Baked pastries stuffed with cheese in all sorts of guises are found…burnt eggplant salads, white bean soups, the combination of meat with dried fruits. Eventually, these separate links among the different groups join all of the groups together into one clear and identifiable local cuisine.”

Hummus, a staple of the Palestinian population, is a cross-cultural constant and heated debate about the best recipes and best hummus joints abound in Jerusalem, both the city and in this cookbook named for the ancient city. Another constant is eggplant.

Although these two men idealistically want to envision their book as a vehicle of bringing peace to their beloved city, they are not naive about the complexities that exist.

“Jerusalemites have so much in common,” say the friends, “but food, at the moment, seems to be the only unifying force in this highly fractured place. The dialogue between Jews and Arabs, and often among Jews themselves, is almost nonexistent. It is sad to note how little daily interaction there is between communities, with people sticking together in closed, homogenous groups. Food, however, seems to break down those boundaries on occasion. You can see people shop together in food markets, or eat in one another’s restaurants. On rare occasions, they work together in partnership in food establishments. It takes a giant leap of faith, but we are happy to take it. What have we got to lose? To imagine that hummus will eventually bring Jerusalemites together, if nothing else will.”

(Arabs first brought eggplants to Italy and Spain… and Sephardic Jews have always been Identified with eggplants even when Europeans were quite suspicious of them, believing that these “mad apples” induced insanity.) 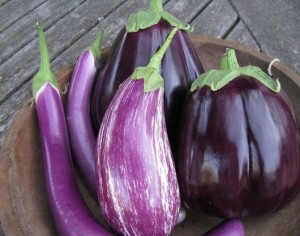 2 large eggplants, halved lengthwise with the stem on

Preheat over to 425 degrees. Score the cut side of each eggplant with a crisscross pattern. Brush the cut sides with 6 tablespoons of the oil and sprinkle liberally with salt and pepper. Pace on a baking sheet, cut side up, and roast in the oven for about 45 minutes, until the flesh is golden brown and completely cooked. While the eggplants are roasting, add the remaining oil to a large frying pan and place over high heat. Add the onions and ½ teaspoon salt and cook for 8 minutes, stirring often, so that part of the onion get really dark and crisp. Seed and chop the chiles, keeping the whole one separate from the half. Add the ground cumin, sumac and whole chopped chile and cook for 2 minutes more before adding the feta. Cook for a final minute, not stirring much, then remove from the heat. Use a small serrated knife to remove the skin and the pith of the lemon. Coarsely chop the flesh, discarding the seeds and place the flesh and any juices in a bowl with the remaining ½ chile and the garlic. Assemble the dish as soon as the eggplants are ready. Transfer the roasted halves to a serving dish and spoon the lemon sauce over the flesh. Warm up the onions a little and spoon over. Serve warm or set aside to come to room temperature.

(“Our basic hummus is super smooth and rich in tahini, just as we like it, and can be kept in the fridge for to up three days and used simply spread over a plate, drizzled with olive oil, and eaten with pita or bread.”)

The night before, put the chickpeas in a large bowl and cover with cold water at least twice their volume. Leave to soak overnight. The next day, drain the chickpeas. Place a medium saucepan over high heat and add the drained chickpeas and baking soda. Cook for about 3 minutes stirring constantly. Add the water and bring to a boil. Cook, skimming off any foam and any skins that float to the surface. Cook between 20 to 40 minutes, sometimes longer. Once done, they should be very tender, breaking up easily when pressed between your thumb and finger, almost but not quite mush. Drain the chickpeas. You should have roughly 3 2/3 cups. Place the chickpeas in a food processor and process until you get a stiff paste. Then, with the machine still running, add the tahini paste, lemon juice, garlic and 1 teaspoon salt. Finally, slowly drizzle in the iced water and allow it to mix for about 5 minutes, until you get a very smooth and creamy paste. Transfer the hummus to a bowl, cover the surface with plastic wrap and let it rest for at least 30 minutes. If not using straightaway, refrigerate until needed. Make sure to take it out of the fridge at least 30 minutes before serving.