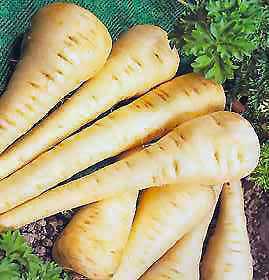 For some reason, chefs are more comfortable with the root vegetable parsnips than most modern home cooks. There’s no good reason for that; more people should be enjoying this sweet and flavorful vegetable that had it’s cultural roots in ancient Rome. In that land the parsnip was considered an aphrodisiac as well as a tasty side dish. As the Roman Empire spread so did the parsnip. It was British colonists who brought this versatile vegetable to the New World.

A parsnip is similar to a carrot, but with a sweeter flavor. Treat it like a carrot or potato and steam, boil or roast it. Parsnips are rich in potassium and they are an excellent source of fiber. About four to six small parsnips make a pound which yields about four servings as a side dish. Companionable herbs to season and garnish parsnips would be basil, tarragon, thyme and dill weed.

Parsnips must be peeled before cooking and when the air hits them, they turn dark. If you want to keep the pale color, toss parsnips with a few drops of lemon juice. Very young and tender parsnips can be grated raw (like carrots) for a salad, but most of the time you want to cook parsnips.

Boil, mash and mix them with mashed potatoes for a fancy and flavorful side for Thanksgiving Day. Drop chunks of parsnips into soups and stews for extra flavor, but do it near the end of cooking time so the parsnips don’t turn to mush. Oven roast them with other seasonal vegetables for a marvelous melange to serve with meats such as chicken or duck.

Recently, I was a guest at a multi-course wine dinner at Fleming’s Prime Steakhouse & Wine Bar where parsnips were served with lamb. Most people at the table couldn’t identify the vegetable although they raved about the taste. It was parsnips gone glamorous. Here’s the recipe. If this is your introduction to parsnips, I hope Chef Russell Skall’s recipe inspires you to experiment with this versatile vegetable. If parsnips are an old friend to your pantry, then you’ll love this new twist. Enjoy! And, eat more parsnips.

Combine maple syrup, lemon juice and butter in a small saucepan over medium heat until butter melts. Remove from heat. Peel parsnips and cut them into batons. Place in an over-proof pan and pour syrup mixture evenly over the parsnips. Cover with aluminum foil and bake at 400-degrees for 40 minutes or until the parsnips are tender and lightly caramelized.