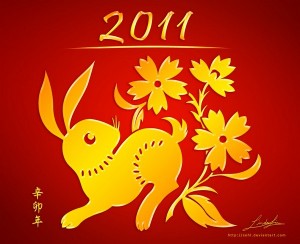 Celebrating Rosh Hashanah and surviving the coercive merriment of Western New Year’s Eve leaves scant energy for marking Chinese New Year’s. Yet I predict that just as we can’t resist reading the Chinese zodiac on our restaurant placemats and identifying tigers, rats, and pigs around the booth, the dancing street dragons and red envelopes that herald The Year of the Rabbit (year number 4708), will charm us out of indifference. Festivities began on Feb. 3.

Traditional New Year’s or Spring Festival dishes have a symbolic meaning, or remind diners of the Chinese characters for fortune, happiness, longevity, and prosperity. Regional favorites like dumplings, rice pudding cakes, and sweetened lotus root are served to family and friends to promote auspicious outcomes.

For the hare unaware, Rabbits inhabit the fourth position in the 12-sign Chinese zodiac. According to the Chinese Culture Center of San Francisco Rabbits are “articulate, talented, and ambitious…virtuous, reserved, and possess excellent taste.”

Rabbits (the bouncy, furry kind) are themselves tasty and familiar to the gastronomy of Europe. Think of the Flemish masters who painted game trophies such as pheasants and hares into their stilllife paintings. The Maltese consider rabbit a staple and are expert in its preparation.

Rabbit meat is versatile enough for stewing, braising, frying, and other cooking treatments. Organs may accompany the rabbit’s fine-grained, mild, and lean meat, or can be stewed separately to flavor gravies, much like a Thanksgiving turkey.

As I watched the finals of the Australian Open tennis tournament I’m reminded of that nation’s continuing struggle with rabbit plagues. The continental ecology has been devastated by the rapid spread of this invasive species, but chefs down under are exacting revenge on a plate. “Bunnies are back (on the menu) in a big way” says online magazine Time Out Sydney of local fine dining establishments. By the way, Sydney hosts the largest Chinese New Year’s festival outside of Asia.

So have your Chinese New Year’s and eat it, too. Just tell the kids that you are serving chicken, not Peter Cottontail.

I return to the Old World for Italian master Marcella Hazan’s Fricasseed Rabbit with Yellow or Red Peppers recipe from Marcella Cucina (Harper-Collins, 1997, $35.00). 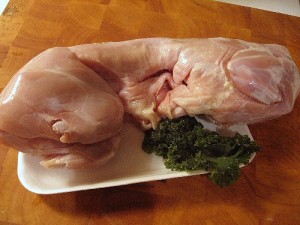 A three to four pound rabbit, cut into seven or eight pieces

Three yellow or red peppers, skinned raw with a peeler, cores and seeds

removed, and sliced into thin strips

Place rabbit pieces in a bowl where they will fit snugly, and add vinegar, salt, and enough water to cover. Let steep for six to seven hours at cool room temperature or overnight in the refrigerator. Turn pieces occasionally.

When ready to cook the rabbit, drain the bowl and was pieces in cold water. Look for any loose small bones and pick them out. Pat meat dry.

In a sauté pan able to contain all the rabbit pieces in a single layer, heat olive oil on high. When oil is hot, put in the rabbit and brown on all sides.

Remove rabbit from the pan, lower heat to medium, and add sliced onion. Turn occasionally and when it becomes lightly colored, add the garlic. Cook for a minute or two, stirring occasionally, then return rabbit to pan.

Turn the meat over once or twice, and then pour in the wine. Scrape the bottom of the pan with a wooden spoon to loosen any browning residues.

Add the peppers, salt, and chopped hot chili pepper to taste. Turn over all the ingredients a few times, place lid on the pan, and turn heat to low. Cook for one to one and a half hours until meat is tender and comes off the bone and the peppers have dissolved almost entirely into the sauce. Check the pan from time to time during the cooking, turning ingredients, and if you find that the cooking juices have dried up, add three to four tablespoons of water if needed. On the other hand, if, when the rabbit is done the pan juices are too runny, remove the meat and turn heat to high, stirring and reducing to a desirable consistency. Enjoy.