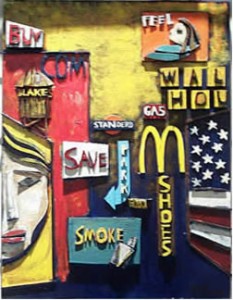 SANFORD, FL-Florida’s interior is very different from the resort glitz of Miami Beach. In vibrant Sanford, you find what tourism officials call original Florida, a place where settlers came and stayed and even today, food reflects the agriculture of the state. Here, farm-to-table isn’t a marketing slogan, it’s a way of life.

Some that grab your attention are by Ab the Flagman. I met Ab, a bright and soft-spoken man, a decade ago along the banks of the Black Warrior River near Tuscaloosa, Alabama at an event called Kentuck, for over 35 years a folk art weekend like no other. Ab’s flags made of scrap wood attracted many others and me and after a chat with the artist I became a fan.

Since that day, I’ve seen Ab’s flags throughout the country. Now, there’s one on my wall.

Versatility best describes Ab. An accomplished blues singer, guitarist and composer, his band, the X-Miss America’s can lay down a boogie or wail about love and loss, all within the confines of a honky tonk. “The Blues has no boundaries,” Ab said.

Born into a military family and raised in Georgia, Ab became enamored with the American flag at a young age. When he was seven, his father died and the flag that draped the coffin took on new meaning.

Like many folk artists, Ab uses found objects, often uncovering his materials from abandoned barns, mills and factories in the South. Where does the inspiration come from? “I create what I like and how I feel,” Ab said. “And, I’m just getting into metal casts.” I saw one of Ab’s casts exhibited at Atlanta’s Folk Fest, another major folk art event and like all I’ve seen by him, it explodes with visual impact. 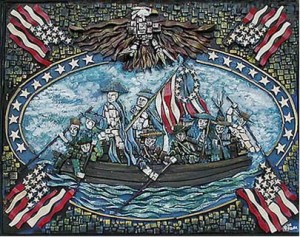 Ab’s work is found in many prestigious public and private collections, including Orlando’s House of Blues, the Mennello Museum of American Art, Orlando Shakespeare Theater, and the Orlando Chamber of Commerce. He was commissioned by the Atlanta Olympic Committee to make several large scale flags to hang in the 1996 Summer Olympic Village, a recognition that his flags symbolically capture the spirit of America through grass-roots inspired themes.

Sanford is an easy drive from urban Orlando and laid-back Titusville, a nationally popular fishing and outdoor recreation destination on the Indian River. Like similar Florida cities, Sanford has its own identity and local food is a rewarding culinary adventure. There are mom and pop cafes and diners where breakfast is still celebrated with a touch of yesterday. 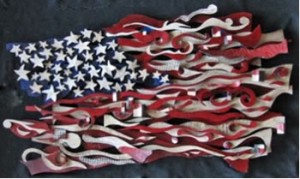 From Key West to Pensacola, Florida folk art is somewhere. The artists range from memory painters to visionaries who communicate with worlds we don’t always understand. The artists are muticultural and mirror the richness of Florida’s population. Much like the frustration of trying to define the blues, jazz or even rock and roll, folk art doesn’t lend itself to an easy description. For collectors, that may be a component of its visual and investment value.

Sanford is vibrant and livable. Jeanine Taylor Folk Art Gallery is a top attraction and the art inside is spellbinding. When Ab isn’t looking for wood and creating his amazing art, he’s playing the blues. If he’s not wailing at a honky-tonk somewhere, there’s a good chance you’ll meet Ab.

There is no doubt you will see his works on the walls. These are not your ordinary flags.

(Doc Lawrence is a veteran travel, food, wine and spirits journalist.
Contact him at: editors@ docsnews.com.)