Memories of Cuba are top-heavy with food, fishing, cocktails, baseball and music. My first baseball coach was named Manuel Cordero, a Cuban-American who inspired me to travel to Cuba and learn. I was lucky to visit during my baby days.

Like Key West, visiting Havana is a Hemingway experience. His home, Finca Vigia is now the Museo Ernest Hemingway and the Cuban government owns Hemingway’s 38-foot boat the Pilar, named for the strong gypsy woman, the bravest soldier in For Whom the Bell Tolls. During World War II, Hemingway used the Pilar to search for German U-boats in the Caribbean waters, inspiring the third act, “At Sea”, in his novel (made into a movie starring George C. Scott), Islands in the Stream. One of Cuba’s best beaches, the Playa Pilar located at the western end of Cayo Guillermo, is named after Hemingway’s fabled cabin cruiser. 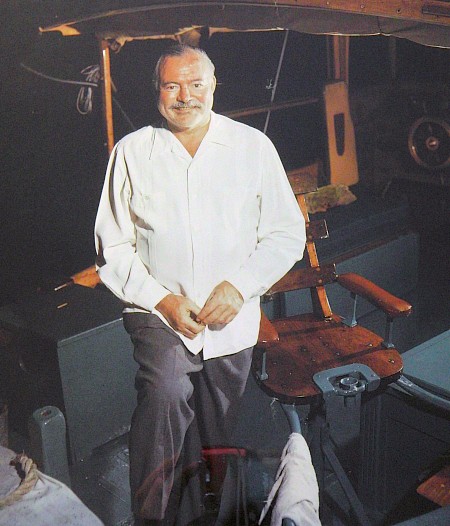 The food most Americans associate with the island is the Cuban sandwich. My first bite of this delicacy was during my freshman year in college at a Tallahassee restaurant named Garcia’s, a family owned cafe that served a full menu of Cuban originals at rock bottom prices. When made by those who know what they are doing, the Cuban would be a candidate for  the best sandwich on the planet. With this sandwich, time and distance are irrelevant: The classic Cuban is made with ham, roasted pork, Swiss cheese, a sliced pickle, butter, and yellow mustard. Everything is between heat pressed fresh Cuban bread.

Five centuries ago, Spaniards came to Cuba with their own Moorish-influenced cooking styles that blended with those of slaves from Africa. Over time this combined with the native cooking traditions and produced a distinct Cuban flavor. These dishes tend to be hearty and improve with simmering.

Heavy sauces and deep-frying are not favored in Cuban cuisine. Common spices are cumin, garlic, oregano and bay leaves. Sofrito, made by sautéing green peppers, onions, garlic, oregano and black pepper in olive oil until they are soft and translucent is incorporated in a large variety of Cuban dishes like black beans, soups and stews, rice and other delights. Onions and many other root vegetables are common. My favorites include black beans and rice, chickpea stew, Cuban paella, fried sweet plantains, roast suckling pig and stuffed red snapper.

Arguably, we would not have the daiquiri or mojito today without Hemingway.  His years in Havana as well as Key West were energized by his love for rum. Papa, as he was often called, wrote “My mojito at the Bodeguita” in Spanish on the wall in La Bodeguita del Medio where it remains today. The Papa Doble, called the Hemingway Daiquiri was crafted in Havana’s La Floridita, a favorite hangout during his years on the island.

Music kinship between Cuba and the U.S runs strong. Jazz is near the top, notably Stan Kenton’s majestic symphony, Cuban Episodes. Rock and Roll wouldn’t be the same without Chuck Berry’s haunting “Havana Moon,” and who can forget Desi Arnez as Ricky Ricardo on “I Love Lucy” playing rumba and mambo jazz with his band at the Copacabana? Havana’s jazz ensemble, the Buena Vista Social Club took American audiences by storm during their performance tour several years ago. 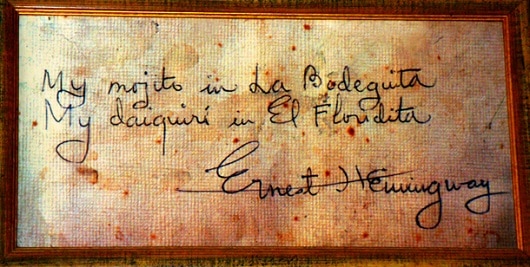 Baseball, America’s pastime is also Cuba’s most popular sport. The game is identical and once upon a time, our Major League teams played exhibition games in Havana and minor league baseball included Havana as one of the franchises.

It’s winter in America and time to flee to warmer climes. What would Hemingway do this time of year? Likely, work early in the day, take the Pilar out to catch some game fish, stop in a favorite watering hole for a few daiquiris, then enjoy a Cuban feast.

There are many ways to lose those winter blues. Go south until the air gets warm. Start the day with a café con leche. Before dinner, have a favorite cocktail and daydream. Hemingway nailed it in The Sun also Rises: “Modern life, too, is often a mechanical oppression and liquor is the only mechanical relief.”

RESOURCE: A Taste of Old Cuba by Maria Josefa Lluria De O’Higgins (Harper Collins 1994) has over 150 authentic recipes along with reflections and reminiscences.