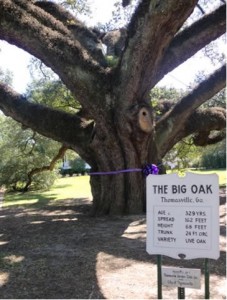 Shelby Foote, the late Civil War historian, claimed he could visit a country café in most any Southern city and have some credible idea of the cultural heritage. What we eat tells a story.

Recently, I took a trip into Southwest Georgia, an area that includes Plains, President Carter’s hometown, Americus, the birthplace of Habitat for Humanity, Albany, a great city that sits along the majestic Flint River, and Thomasville, one of America’s loveliest small towns. This is a fertile land with pure water where almost everything eaten is local.

Albany, Georgia has powerful music connections. The city is best known for native son Ray Charles. At the highly impressive Ray Charles Plaza in Riverfront Park, the lights on the sculpture change as Ray at the piano slowly rotates. You can’t help singing “Georgia On My Mind,” so identified with Mr. Charles that it became Georgia’s official state song.

The initial dinner was at The Catch, a great restaurant for fresh seafood from oysters and shrimp to fresh flounder. The reasonably priced wine list is better than many in major cities like Miami and Atlanta. 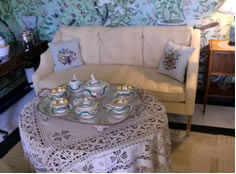 Down South, a good day starts with breakfast and Aunt Fannie’s Checkered Apron offered up homemade sausage, fresh eggs, biscuits with gravy and unlimited hot coffee, with friendly service and a chat with the ebullient owner.

Albany boasts Food Network superstar Paula Deen as one of its own. She learned her way around the kitchen in this river city and her name springs up everywhere: the personable local girl who made the big time.

The historic Bridge House is on the path to the fascinating Flint River Quarium, featuring a 75,000-gallon tank, an open-air Blue Hole spring with hundreds of different aquatic species and a new aviary. A short walk up the hill and you’re ready for pulled pork at highly popular 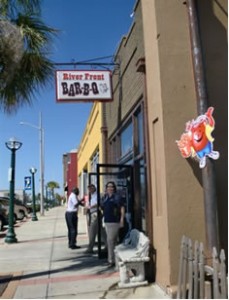 Riverfront BBQ. The ribs are heavenly.

A mid afternoon walk to the Thronateeska Heritage Center with the Wetherbee Planetarium showcases the only hi-def planetarium in the country with a 40-foot dome and digital projection. One of Georgia’s Seven Natural Wonders, Radium Springs Garden pumps 70,000 gallons of clear, 68-degree water per minute from an underground cave.

Good coffee is de rigueur at the Brown Bean coffee shop inside the new Albany library and for a handmade milkshake, I dropped in at Doc Heilinbel’s, a local pharmacy with an old soda fountain.

Henry’s Fine Edibles is the local happy hour headquarters, serving fine wines and generous cocktails, priming the appetite for an informal dinner at Harvest Moon, known for its pizzas and live blues and rock in the style of Georgia’s own Allmann Brothers and James Brown.

Just south of Albany is fabled Thomasville, with Plantations and a downtown canopied with Live Oaks with  neighborhoods showcasing Victorian homes. Historic Pebble Hill Plantation with guided tours is a prime destination. Thomasville’s attractions include one of America’s finest lunch spots, Jonah’s Fish and Grits. Nearby Sweet Grass Dairy – a world-class cheese producer where happy goats roam free, just opened a wine and cheese store in Thomasville and the pairing demonstrations are bringing in wine enthusiasts.

Blackbeard’s, another Albany barbeque and seafood shrine greets diners with an imposing gigantic mounted Marlin, somewhat symbolic of the giant platters of fried catfish, mullet and oysters served in a family-friendly environment. It’s huge, but the place works like a watch. 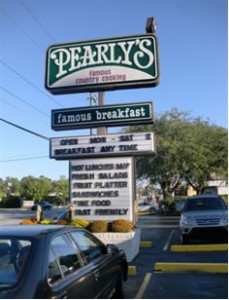 Forget everything gourmet to make room for Pearly’s, a local favorite for breakfast. Pearly, an ebullient host, holds court making certain diners has full coffee cups and overflowing plates of breakfast goodies. Grandma would be proud.

Energized by Pearly’s, it was time for a tour of Chehaw an 800-acre nature park with a 100-acre AZA accredited zoo with rhinos and racing cheetahs.

Lunch was a picnic alongside the Flint River, feasting on Jimmy’s Hot Dogs, arguably the tastiest in the country. The nearby Albany Civil Rights Institute tells the dramatic struggles during the tumultuous 1960’s that played out in Albany.

Near the Florida border, Still Pond Vineyards produces exceptional Muscadine wines. Many are bone dry and all pair with the right food including prime beef. The largest organic beef farm in Georgia, White Oak Pastures provided grilled tenderloin and the wines poured added to the magic of the experience.

My epicurean adventure ended at elegant Henry Campbell’s, The Steakhouse, another Albany gourmet restaurant with a well-constructed wine list, accomplished chef and support staff you would expect to find in an exclusive country club. 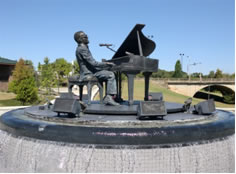 Southwest Georgia’s culinary traditions are closely tied to the exceptional soil, water and air. Almost everything cooked and served is local, fresh and delicious. Just like they’ve been doing for generations.

Photos: 1. Thomasville’s fabled live oak attracts visitors from the four corners. 2. Afternoon tea is a Pebble Hills Plantation tradition.  3. Barbeque is king in the south and River Front BBQ in Albany is highly ranked. 4. Pearly’s is an Albany landmark – hot biscuits, gravy and eggs, any style. 5. Ray Charles sits at his piano alongside the Flint River.