Autumn is tailgating time, my annual visit to college towns in the South to experience this truly America ritual. Game day visits to Knoxville, Athens and Tallahassee broadened my taste horizons with more to come in future venues including Gainesville, Tuscaloosa and Baton Rouge.

The games – filled with color and pageantry – are fun but the lasting joys of savoir-faire come from the parking lot celebrations of friendship with food and drink.

Driving the long roads during tailgating season is always an opportunity to search for the elusive pecan truffle. It’s no joke, and if this fungus was commercially harvested and marketed, we would have a new and valuable gourmet product. 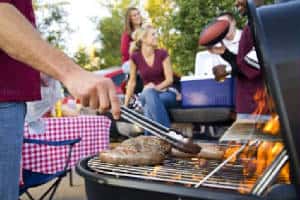 In the tailgating sections set aside for pre-game feasts, inventive food is the norm. Life seemed a little empty until I enjoyed grilled Florida lobster. Quail smoked in peach wood is a Tennessee delight, but one stands out: Dog Island Grouper Burgers with Florida Slaw and Tallahassee Tartar Sauce. This masterpiece is the handiwork of Chef Josh Butler, who for a good many years was entitled to be called Florida’s Top Chef. Heading the culinary team for three Florida governors remains an accomplishment perhaps no other will be able to claim.

Josh, still young, has moved on and now travels and cooks with the Grammy Award-winning Zac Brown Band. He claims that his kitchen wizardry began years ago when he was seated next to Julia Child at a gourmet event. “She even allowed me to give her a kiss on the cheek,” he recalls.

Perhaps the idea of creating a Grouper Burger originated with a kiss.

Earlier this year, I visited White Oak Pastures, Will Harris’ acclaimed farm in Bluffton, Georgia near the Florida border. Harris has won the admiration of chefs, conservationists, nutritionists and those who believe in the humane treatment of animals in the food chain. His cattle and sheep eat grass. Chickens and turkeys are free-range and the huge operation glows with Harris’ commitment to produce better food.

There are many special tailgating moments: A grass-feed beef burger grilled by a group of good natured fans at the University of Georgia was terrific with a glass of well-balanced Pinot Noir. I remembered that Will Harris prefers his beef with Australian Shiraz.

Squeezed into a tailgating travel schedule are several days at the inaugural “First Floridians – First Americans” symposium in the gorgeous north Florida city, Monticello. Held at the restored magnificent Monticello Opera House, participants from as far away as Nepal are sharing scientific findings that humans occupied the area as long as 14,000 years ago. Near the city is Avalon, Ted Turner’s plantation holding a well-preserved portion of the ancient Spanish Trace. Going towards the Gulf of Mexico are woodlands and rivers more akin to the Amazon Rain Forest than popular perceptions of Florida.

Native products here include rare Tupelo honey and Mayhaw jelly. In the tailgating culture of Florida, Alabama and Georgia, these are commonly served, adding even more regional authenticity plus wonderful flavors to the feasts.

Leaving Monticello for more tailgating adventures provides a view of pecan trees in many places. Some are ancient. Pecan truffles are there, still waiting to become a new cooking rage someday.

Headed towards the coastal route into Alabama, Dog Island is near enough for a stop. Accessible by boat or ferry, it marks the spot where ships have gone down to a Gulf graveyard for over 500 years.

Now it is the namesake of the legendary Grouper Burger.

Add the shrimp to a food processor and pulse until it forms a paste. Roughly chop the grouper into pieces the size of a dime. In a large bowl, combine the chopped Grouper, Shrimp paste, salt, pepper, onion, bell pepper, breadcrumbs, egg, mustard, and mayonnaise and fold gently to distribute the ingredients evenly. Divide the meat into four equal sections. Shape each portion into a patty. Cover the patties with plastic wrap and refrigerate for 1 hour. Cook the burgers for 4 minutes per side or until the internal temperature reaches 150°F. Place the cooked burgers on top of the whole grain rolls, then top with Florida slaw and Green Tartar sauce.

Salt and cayenne pepper, to taste

In a food processor or blender, add the fresh herbs, spinach and lemon juice, then puree. Add the mayo and yogurt and puree to incorporate the herbs.  Pour this mixture into a bowl and fold in the remaining ingredients. Season with salt , pepper and cayenne. Cover and refrigerate until ready to use.

Place the vegetables in a mixing bowl and toss with olive oil. With a serrated knife, peel the grapefruits and tangerines and cut out the segments removing the white pith. Cut the sections into bite size pieces then add to the cabbage mixture. Mix the lime juice and the sugar together until dissolved. Add the yogurt and toss well. Add salt and pepper to taste. Cover and refrigerate for an hour.