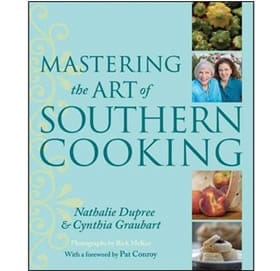 The great cook and restaurateur Edna Lewis once told Gourmet Magazine that “there is something about the South that stimulates creativity in people, be they black or white writers, artists, cooks, builders, or primitives that pass away without knowing they were talented. It is also interesting to note that the South developed the only cuisine in this country.”More than a few believe that Southern food traditions are American bedrock.

Joining those who have taken their Southern culinary achievements to a national and international audience is Nathalie Dupree. With her new cookbook, Mastering the Art of Southern Cooking, a monumental 720-page work co-authored by the accomplished Cynthia Graubart, this highly readable and almost encyclopedic treatise has earned a space in my culinary library. For those who appreciate authenticity, it should be near their kitchen counter.

No stranger to the limelight, Nathalie Dupree is a celebrated cook, popular teacher, acclaimed author, and pioneer TV cooking show host.  She started her restaurant career after finishing London’s Cordon Bleu and with stops on the way, came to Atlanta. A genuine television cooking pioneer, Ms. Dupree starred on more than 300 top rated television cooking shows on PBS, forever changing the culinary landscape of the South.  She has been featured on “The Today Show”, “Good Morning America”,  “CBS This Morning” and CNN and her daily “Home Cooking” tips have aired on more than 1,000 radio stations. Two of her dozen books, Southern Memories and Nathalie Dupree’s Comfortable Entertaining, received James Beard Awards.

The book is an evolutionary milestone for Nathalie Dupree who has been teaching technique and ingredients to the masses. She launched the “new Southern cooking movement” a blending of regional ingredients with French and Southern cooking techniques and founded the groundbreaking Rich’s Cooking School in Atlanta.  As chef, instructor and director for more than a decade, she taught over 10,000 students including some of today’s celebrity chefs.

The book’s title should sound familiar. Substitute French for Southern and you have Julia Child’s masterpiece. However, the title selection wasn’t predicated on borrowing hallowed words, but a salute to Ms. Dupree’s close friend. It is fair to say Julia Child’s Southern connection was Nathalie Dupree.

I once asked Nathalie Dupree her favorite memory of Julia Child: “Julia came to Rich’s (the cooking school at the famous Atlanta department store) a number of times, as well as once or twice to my home.  The time I most remember was when she did an event for 500 people.  The line for her book signing was horrific.  Then she had seven TV and press interviews that she conducted in the Cooking School, where we were to have lunch.   We had made butterbeans, among other things.  Every time someone walked by them whether a producer, television crew or one of my students or assistants, they stirred them. It was sort of a subliminal reaction, nervousness over having Julia there.  By the time lunch came around, the butterbeans were mush!”

Cynthia Garubart was instrumental in Ms. Dupree’s Southern cooking career, helping take her to a national audience as producer of the television series in 1985 to accompany another influential book New Southern Cooking. The added value in Mastering the Art of Southern Cooking is the continuing the influence of their early collaborations: Each recipe and advisory combines tradition with practicality.

Nathalie Dupree is a founder and two-term president of the International Association of Culinary Professionals, a founding member of the Southern Foodways Alliance and active in the James Beard Foundation.  She was the founding Chair of the Charleston Food and Wine Festival, as well as organizer and first co-president of the Charleston Chapter of Les Dames d’Escoffier

Echoing the sentiments of Edna Lewis, Nathalie Dupree states that “Southern cooking is the mother cuisine of America.” In the words of another child of the South, baseball immortal Dizzy Dean, “it ain’t bragging if you can back it up.” Mastering the Art of Southern Cooking stands alone today as a lifetime achievement that preserves core food heritage and is a mighty handy for cooks at any level. Knowing how we cook, eat and celebrate down here is an enjoyable first step on the journey to enlightenment.