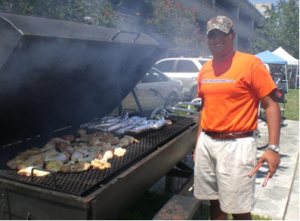 Opening day is approaching and anticipation grows from Pensacola to Miami. Football season is exciting, particularly the pageantry and rivalry colleges provide. But tailgating, the food and beverage ritual held annually in the parking lots outside stadiums has taken on a life of its own. Gone are the days of just flipped burgers and cans of cold beer. Now, there are elaborate casseroles, grilled delicacies, magnificent desserts and fine wines, carefully crafted cocktails and those oh-so-delicious glasses of sangria.

This time of year, I recall my first experience with this ceremony. 1981 in Baton Rouge, LSU was playing FSU in a rare afternoon home game and I was strolling through the campus and the parking lot outside Tiger Stadium (built by Huey Long’s partnership with the WPA) and music was everywhere, blended with smoke and aromas from black pots and grills. Three people were singing and one played a fiddle while nearby revelers danced. It was the only time I ever heard “Jambalaya,” the Hank Williams classic, in French. 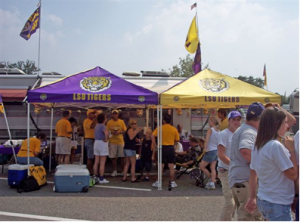 The people were friendly and invited me over for gumbo and some andouille sausage, plus glasses of wine. They were indifferent to my Seminole regalia. After an hour or so, during which I learned two dances, the two-step and Cajun waltz, we swapped addresses. Twenty years later, we still correspond and plan a reunion this fall.

In the same parking lot. These fans have perpetual season tickets and their love of partying and football runs deep.

This season, you’ll find me in Gainesville, Miami, Tallahassee, Baton Rouge, Athens and Chapel Hill college stadium parking lots, covering the food and refreshments served up by some very talented cooks. Over the years, I’ve noticed some changes. Gumbos were once a hot item, but dishes like shrimp and grits are quite common now. Sangria, the great hot weather punch is in demand and fun to make and drink.

Here is a variation of a highly popular tailgating dish. The evolution of shrimp and grits is similar to gumbo. There are countless recipes and really no such thing as one gumbo or one shrimp and grits. This recipe is included in the just published cookbook from the congregation at Grace-Calvary Episcopal Church in the Blue Ridge Mountain village of Clarkesville, Georgia 100 miles north of Atlanta near the North Carolina border. Barrie Aycock, the longtime owner and manager of Glen-Ella Springs Inn, a resort that dates back to Colonial America, produced the cookbook. Salsa of most any kind makes a wonderful accompaniment.

Pour grits into large bowl and cover with cold water. Skim off the chaff as it floats to the surface. Drain. Bring 4 cups water to boil in a medium saucepan. Add salt and then slowly add grits. Cook at a simmer, stirring frequently, for 40 minutes. Remove grits from heat and stir in butter and cheese.

Rinse and pat dry shrimp. Dice bacon and fry in a large skillet until browned and crisp. Remove bacon from skillet and add just enough oil to cover bottom of pan. Heat over medium temperature until grease is hot. Add shrimp and cook until light pink. Add garlic and lemon juice. Cook briefly until shrimp are done. Sprinkle with scallions and bacon. Serve shrimp on top of cheese grits. Keep warm until ready to serve.

This wildly popular dish tastes even better with glasses of chilled Sancerre.

(Doc Lawrence is a veteran travel, food, wine and spirits journalist.
Contact him at: editors@ docsnews.com.)