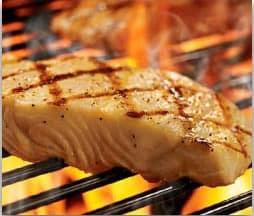 Back yard live-fire enthusiasts, whether they favor Red Stripes or Blue Ribbons, will unite around a campaign featuring smoke or flame. When the coals open each summer, burgers, pork loins and chicken are the dominant candidates, but this year I’m punching my chad for fish.

Why do I think too many grillers consider fish unelectable? It’s delicate. It’s unforgiving. It’s bony. It’s, well, fishy. But it’s also delicious when you rally the right techniques and ingredients.

Leave the skin intact. In the Gulf region you will find grilled redfish “on the half shell” where skin and scales protect the flesh and maintain moisture. Florida’s superb snook was once considered trash until anglers began removing the skin from their “soap fish,” so beware of exceptions. 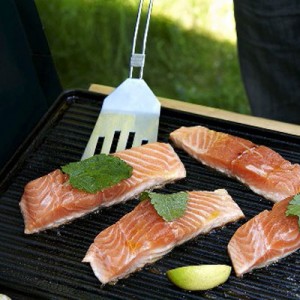 Once on the plate skin should peel off your fillets with minimal effort. Remember Steven Raichlen’s rules – keep your grill hot, clean, and lubricated to avoid sticking.

Go low and slow. Fish can dry out on a hot grill in the time it takes to pour a beer and double dip a pita chip in your cousin’s guacamole. Be generous with fat, salt, and citrus. A compound butter spiked with lemon zest and tarragon will so bathe your fillets or steaks in satiny goodness that dinner guests may blush. Marinating and brining fish can enhance flavor, texture and moisture, but don’t soak them in the pool too long.

Choose fish that remove or reduce the chances of an unwelcome guest. Sturgeon, for example, is cartilaginous and contains no bones. Ask your fishmonger for suggestions.

Search your public library catalog for cookbooks from fish experts like chefs Rick Moonan and Barton Seaver. Experiment with fish-friendly seasonings such as fennel, coriander, miso and capers. If feeling adventurous hot or cold smoke your catch. YouTube® is full of instructional videos.

Ignore the negative ads. Fish and grills are a winning ticket, and they deserve your support.

The following recipe from pisciverous pit master Barton Seaver’s book For Cod and Country (New York: Sterling, 2011, $30) reminds me of a wahoo dish I enjoyed in a St. Petersburg, Florida Moroccan restaurant. The mild, dense Wahoo was paired with a Mediterranean vegetable tagine – delectable. Wahoo, known in Hawaii as ono, is among the fastest fish in any ocean, so it earns admiration on the end of a diner’s fork or angler’s line.

6 cloves garlic, each cut in half

12 prunes, each cut into eighths

For the ratatouille, heat the olive oil in a large saucepan. When the oil is hot, add the garlic, pepper, and onion and cook over high heat until the pepper is blistered and the garlic is browned. Add the almonds and prunes and cook until the almonds begin to brown, about another 5 minutes. Add the zucchini and squash and cook for 4 minutes. Season to taste with salt and reduce heat to low. Add the tomatoes and vinegar, season again with salt, and cover. Let simmer until the squash is soft and the tomatoes release all their juice, about 15 minutes.

For the wahoo, prepare a grill (according to instructions in book). Place the wahoo on the hottest part of the grill and cook for I minute. Turn the fish over and cook for 1 minute more. Rotate the fish (Chef Seaver recommends turning the grill grate, rather than moving fish, to bring fillets successively over hot and cool spots) to cook the remaining sides for about 30 seconds each and remove from the grill. The fish should be medium rare. To serve, divide the ratatouille among 4 plates. Thinly slice each portion of wahoo on the bias and arrange portions over the ratatouille. Serves 4.