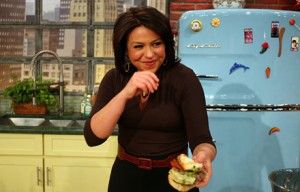 Even our dogs love The Rachael for her dog food. Our fluff balls refuse to cook, but they are talented eaters.

My observation is that many humans don’t cook either, but we do like to watch someone else do it. Some of us enjoy watching Rachael Ray use those nostalgic appliances in her television kitchen. For many viewers it brings back kitchen memories but not necessarily of mom’s cooking.

What is it about Rachael’s sky-blue refrigerator? Well, there are homeowners who crave that retro look and buy those old time appliances either as a whimsical accent in a modern kitchen or as the centerpiece in a full-scale retro renovation. Rachael’s “collection” design is of the immediate post-war era, when a streamlined but softer and more rounded look was the norm. The style references Art-Deco and is chrome festooned. Rachael actually cheats a bit as her appliances are “brand-new-retro.” She evidently wants today’s frost-free feature and better insulation. Such a sissy. 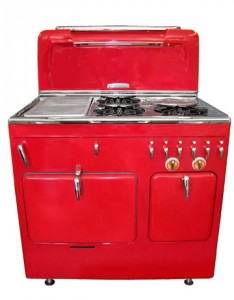 Many original appliances from the 1940s and 50s still seem to be desired too. As many mid-century modern houses are being restored to their original condition, these appliances fit right in. Any number of companies sell reconditioned oldies with new gaskets, hinges and other parts. These ice-boxes don’t have to run 24/7 so they’re not the big energy hogs. Plus the essential core parts are built in the USA and will chug on forever with just a bit of love. And money. And yes, you do have to manually defrost but isn’t that why your mother-in-law lives with you?

Moving along, the post-war consumer was ready for new design directions. For example, the radical 1953 Philco “V” was the only refrigerator (ever!) with a door that opened to either side. However the lethal combination of being expensive and odd, along with the oh-so-minor problem of the door sometimes falling off, meant that in about 18 months the “V” vamoosed. Now they fetch $1,200 and are being sought and bought. Also prized are vintage Kelvinator, Coldspot and Westinghouse beauties.

Out with the rounded-off pre-war shapes. In with a new direction from General Motors in 1956. Sharp and crisp. Yes kiddies, the General Motors that made your father’s Oldsmobile also made dad’s Frigidaire brand appliances. Number one in sales.

To paraphrase Arthur Pulos’ great book, The American Design Adventure 1940-1975. “By the late 1950s…  design of major appliances was moving away from the softer streamline era shapes (1940s) and toward sharp rectilinear forms.” Pulos points out that manufacturers began using better insulation, which allowed thinner, pre-painted, sheet steel. Ergo, sharper edges. “Moreover, rectangular boxes were in harmony with the International Style of architecture and suitable as built-ins. (Think Bauhaus.)

A 1959 survey by the Illinois Institute of Technology rated the Sheer Look in the top 10 designs. Right there with the iconic Barcelona chair. This was a major change in design and influenced the whole look of the new kitchen through the 60s.

So you students who are still awake, Frigidaire’s Dream Kitchen 1956 featuring the Sheer Look was a ta-da moment. The ad agency that did much of GM’s car advertisements (same guys gave us the Mr. Clean jingle) attempted to join the haute couture fashion world with the four walls of the kitchen. Fashion models in Oleg Cassini’s Sheer Look outfits also did the Sheer Look gesture in elbow length gloves. (Make an upside down “L” with your finger tips together, imitating the sharp right angle corners of the appliances!)

Again, wet blanket Pulos: “the new look was actually generated by technological advances rather than fashion – it was associated with fashion in order to make it more palatable to the public.”

This new design direction of the clean Sheer Look, sitting in the heart of the home, increased Americas’ awareness about design and certainly reflected the post war optimism and sense of progress. And it radically changed the look of America’s kitchen. Sadly, I haven’t been able to locate a Sheer Look unit in a tricked-out convenient version. But, it you want an authentic 1960 kitchen with a genuine nostalgic refrigerator, it looks like your fire-breathing mother-in-law is going to have to keep defrosting.

7 thoughts on “Hungry For Nostalgic Refrigerators”