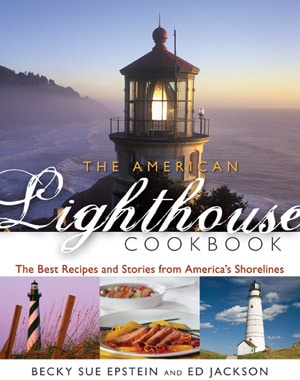 Culinary inspiration (and exemplary recipes) can come from a variety of sources but America’s iconic lighthouses don’t immediately come to mind. And yet, a cookbook called The American Lighthouse Cookbook (Cumberland House, $26.99) ingeniously combines food and lighthouses and it turns out to be not such a stretch.

Authors Becky Sue Epstein and Ed Jackson, divide the country into eight geographic zones and then research local coastal cuisine in those regions where lighthouse keepers and their families lived and worked and ate their meals every day. They would not have called their daily fare cuisine; more like available sustenance. In the book we learn that even though most lighthouses were built on cliffs, islands or rocky spits of unforgiving land, the keeper families often kept chickens since they take up such little real estate and the families frequently planted a garden and kept goats and occasionally a cow. They ate what was in season and, of course, harvested the bounty of the sea.

This delightful and illuminating book features pencil drawings of 47 lighthouses and a compilation of some 300 recipes. Stories about the lighthouses and the families who lived in them are also included. There’s genuine American history in this cookbook.

This book would be an entirely appropriate gift for someone whose hobby is researching and visiting lighthouses and well as being a good eater. Many, but not all, of the recipes are seafood and side dishes to accompany them, and lots have an ethnic flair reflecting the cultures of the people who settled the coastlines of America. And even if you have no particular interest in the romance and lore of lighthouses, the recipes are terrific and none is complicated. Here are a few.

(This Portuguese-inspired soup is a meal in itself. 8 servings.)

Wash the kale, trim away thick stems and ribs and cut into 1-inch pieces. Heat a pot over medium head and add vegetable oil. Sauté the sausage, onions and garlic. Season with half the salt and pepper and cook for 10 minutes or until onions are tender. Stir in the kale and cook for another 4 minutes. Mix in the tomatoes and chicken stock. Simmer for 40 minutes. Add clams and cook for another 5 minutes or until the clams open. Taste and season with remaining salt and pepper. After 10 minutes, discard any unopened clams.

Juice and zest of 1 lemon

Mix together the egg, mayonnaise, mustard, parsley, chives, dry mustard and lemon juice and zest. Fold together the crabmeat, bread crumbs, salt and pepper. Combine with the mayonnaise mixture. Do not over mix. Form into 12 patties. Heat a pan on medium-high heat. Put the oil into the pan. Fry cakes for 2-3 minutes on each side until golden brown.

Heat oil in a heavy large pot over medium heat and sauté bacon for 3- to 4 minutes. Stir in onions, celery and garlic. Cook 20 minutes or until vegetables are tender. Rinse the rice 3 times until water runs clear. Stir in rice, tomatoes, marjoram, parsley, stock, salt and pepper. Cover, bring to a boil, and reduced to a simmer. Cook, covered, until all the liquid is absorbed, about 25-30 minutes. Turn off heat, stir in the butter using a fork and allow rest, covered, for 5 minutes.

(Great as an appetizer, a side or a vegetarian main dish. Serves 6.)

(Fenwick Island Lighthouse, Fenwick Island, Delaware. This dessert can be made any time of the year because you use canned peaches.)

Preheat oven to 350 degrees. Drain the peaches, putting the juice into a pot along with the sugar and molasses. In a separate bowl, combine the sherry and cornstarch, and stir into the reserved peach-juice mixture. Cook on medium heat until thickened. Stir in almond extract and reserved peaches. Pour into a baking dish and top with Cinnamon Crisp Topping. Bake for 30 minutes.

Combine all ingredients and put on top of peach mixture before baking.