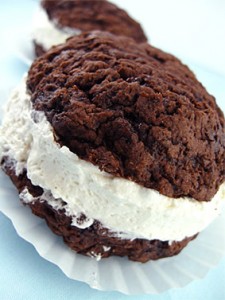 Cupcakes started it all – those individual treats that went from second grade- class-party staple to haute cuisine in a matter of months. (Seriously, how many cupcake shops have sprouted up in your city recently? I’ve counted at least three in mine.)

And now, thanks to the cupcake trend, mini-cupcakes, mini-doughnuts (and mini-everything, really), have risen in popularity, as well. But there’s another classic that’s having its moment in the spotlight, as well: whoopie pies.

Whoopie pies are a bit ambiguous in cuisine profile because they can be considered cookie, cake or pie, thanks to the soft pieces of chocolate cake that surround a creamy frosting center. But no matter how you classify them, one thing is certain, they are delicious.

Whoopie pies were probably invented in Pennsylvania where they were originally a regional Amish treat that may have evolved as a thrifty use for leftover cake batter. Amish wives would put the treats in their farmer husbands’ lunchboxes, and when the men opened the boxes and discovered the treat, they would holler, “Whoopie!” Hence, whoopie pies. Cute, huh?

Now, of course, whoopie pies are global. They’re the official treat of the state of Maine. You can find them in high-end bakeries, but Starbucks also sells mini-versions at all its retail locations. They’ve become popular in baking oriented cookbooks such as Baked Explorations: Classic American Desserts Reinvented, by Matt Lewis. And Renato Poliafito of the famous Baked bakeries, offers an especially tantalizing version. 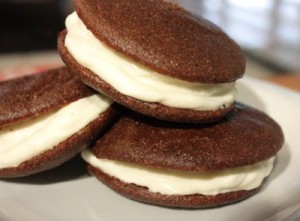 Although red velvet and pumpkin are also popular whoopie pie flavors, I’m partial good old chocolate. Make sure you start with a good cake base because it’ll throw the whole thing off if you don’t. And as far as frosting goes, you can’t skimp. Whoopie pies are one of those desserts where you just have to go all out. They simply taste better with a thick layer of creamy filling.

And speaking of filling, whoopie pie purists insist that the genuine whoopie pie should be made with marshmallow fluff, but I say feel free to experiment. Peanut butter filling would be delicious; so would a slightly tangy cream cheese frosting. Why not mix it up?

Do you have a favorite whoopie pie recipe? Please share it! 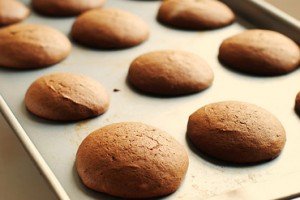 Make cakes:
Preheat oven to 350. Whisk together flour, cocoa, baking soda, and salt in a bowl until combined. Stir together buttermilk and vanilla in a small bowl. Beat together butter and brown sugar in a large bowl with an electric mixer at medium-high speed until pale and fluffy, about 3 minutes in a standing mixer or 5 minutes with a handheld, then add egg, beating until combined well. Reduce speed to low and alternately mix in flour mixture and buttermilk in batches, beginning and ending with flour, scraping down side of bowl occasionally, and mixing until smooth.

Spoon 1/4-cup mounds of batter about 2 inches apart onto 2 buttered large baking sheets. Bake in upper and lower thirds of oven, switching position of sheets halfway through baking, until tops are puffed and cakes spring back when touched, 11 to 13 minutes. Transfer with a metal spatula to a rack to cool completely.

Make filling:
Beat together butter, confectioners’ sugar, marshmallow, and vanilla in a bowl with electric mixer at medium speed until smooth, about 3 minutes.

Assemble pies:
Spread a rounded tablespoon filling on flat sides of half of cakes and top with remaining cakes. Now go make everyone in the house happy.

2 thoughts on “Making Whoopie (Pies, That is)”