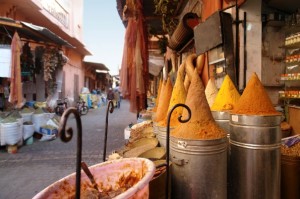 Having been essentially abandoned with no money, some primitive tools and a pile of leather scraps, by the so-called company which had lured me to Morocco with promises of a job, I found myself scrambling, and for the first month I lived on a handful of steamed wheat per day, with a pat of butter to render it palatable.

One can never be too thin – or too beautiful, and I engaged myself in testing the veracity of that quote while simultaneously turning myself into an artisan of some sort or another. At this time there were, besides myself, 11 other Western/English-speaking travelers living in different parts of the city. One small group was closer to the vegetable market, while I was adjacent to the port. Among that former group was Lynn, who would eventually become my bride. 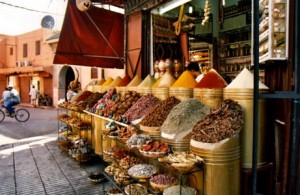 Success is a relative term to which I laid claim when I was finally able to eat a meal at the cheapest possible place within the ancient city walls of that, my only truly beloved city of Morocco (pop 26,000), on this earth. This elevation in my professional situation was accompanied by the necessity to engage in what I euphemistically referred to as “Marrakech sales trips,” a contingency which led to a much closer relationship with said vegetable market group, in that they looked after my cat Zebidee while I was away. Luckily, my cat was a close friend of their cat, Wuss-Puss.

It was difficult to find the correct alley leading to Bean Street – it had no name or sign that I knew of, and led to a small courtyard, at the entrance to which stood a wizened and hooded creature who sold the flat loaves of bread for which Morocco is famous. 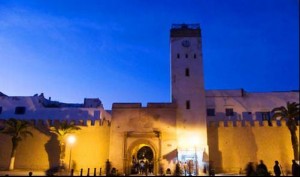 Leading off the courtyard were six, or seven perhaps, low doorways through which one had to bend double, while stepping down into sunken and unlit rooms, offering smoke stained walls, rarely cleaned rush matting with occasional low tables, no chairs, a bucket of gray water for rinsing spoons plates, and a softly bubbling cauldron of aromatic stew which was never emptied but simply added to. The food, different behind each doorway, was fabulous. You could never beat Bean Street.

Business prospered as I became somewhat famous in my own little way, and I took to cooking at home, trying with varying levels of success to duplicate the pots of Bean Street. At the same time, remembering too clearly the pangs of hunger, I fed, nearly every night, an ever changing group of hippies, otherwise know as “freaks on the road,” who had not the wherewithal, nor the ability to provide for themselves.

I was able hear them, as I finished my creations for the day, gathering under my windows around dusk, sounding eager, yet unwilling to arrive too early, until, perhaps by consensus, or simple need, they finally trooped up the stairs for a bowl of stew, and a slice of bread. Some would attempt to give, though no such thing was necessary, that which they could not afford to, while others might surreptitiously leave a little lump of hashish on a table somewhere around that rooftop, gleaming white though lacking plumbing, but slashed with sunlight, overlooking the ancient port and facing the ever-important sunset – my apartment/workshop in the sky.

Unlike Bean Street, my pot was emptied every night, and I will not attempt a recipe for what was made there. I direct you to Paula Wolfert’s  Cous Cous and other good food from Morocco. Indulge and enjoy! 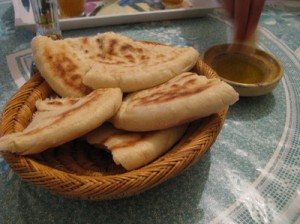 This bread is dense, to help soak up all the lovely sauces that come with a tagine.

Soften the yeast in 1 tbsp sugared lukewarm water. Let stand a few minutes, then stir and set in a warm place until the yeast froths up. Meanwhile, mix the flours and salt together. Stir the yeast into the flour, then add the milk and enough lukewarm water to form a stiff dough. The amount of water you need will depend on your particular flour but I need about a cup. Add no more than 1/4 cup water at a time until you can see the dough coming together. To knead by hand, turn the dough out onto a board and knead hard, adding water if necessary. Knead for 10-15 minutes until smooth and elastic. Or use an electric beater with a dough hook and this takes 7-8 minutes at a slow speed. Towards the end, add the spices. Split into two balls and let stand 5 minutes. Meanwhile, lightly grease a mixing bowl.

Transfer the first ball of dough into the greased bowl and form a cone shape by holding the dough in one hand and rotating it against the side of the bowl.

Turn out onto a baking sheet that has been sprinkled with cornmeal. Flatten the cone with the palm of your hand to make a disc that is about 5-6 inches across and slightly raised in the center. Repeat with the second dough ball. Cover with a damp towel and let rise 2 hours. Preheat the oven to 200 C or 400 degrees. Using a fork, prick the bread around the sides 3-4 times. Bake on the center shelf of the oven for 12 minutes, then lower the heat 300 degrees and bake 30-40 minutes more. Remove and let cool. Cut into wedges when you’re ready to serve.