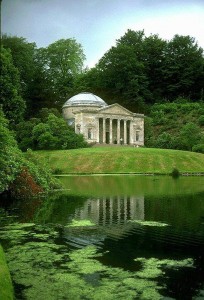 Don’t ever appear as though you don’t have a clue.

Fake it till you make it.

Dozing over cookbook pictures at my Flavors and More desk, the editor rudely distracted me from thinking about lunch with “How about writing about garden follies? I’ve always wanted a folly,” she mused.

Now, who amongst us has any clue as to what a garden folly actually is?

Really, I mean follies other than your last marriage to that astrologist? However, being The Expert in all things, I faked my best faux-enthusiastic “Great Idea!” and she tripped lightly away. Now what brought that on? Ah, the editor is just back from New England, named after England where garden follies originated. Deliver us Flavors and More writers from her trips. Last summer it was Civil War battlefields. Four score and seven nutty ideas later… Guess things could be worse.

Ever the go-getter, Google and I fund this: “Follies began.. (as) decorative accents.. (on) estates of the late 16th century.. they flourished.. in the two centuries which followed. Many estates had ruins of 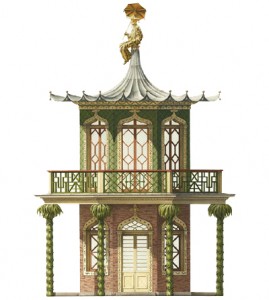 monastic houses and (in Italy) Roman villas; others.. constructed their own sham versions of these romantic structures. Such structures were often dubbed “[name of architect or builder]’s folly”. (Get it? folly = now called follies?) … few follies are completely without a practical purpose. Apart from their decorative aspect, many originally had a use which was lost later, such as hunting towers.”

The Folly Fellowship, a UK nonprofit organization, claims the follies are misunderstood today. (So worth going to their Web site to truly appreciate the British.) Thus with piqued interest, I Googled onward.

Gwyn Headley, in Architectural Follies in America (John Wiley & Sons, 1996), considers follies as “…structures that are not ordinary buildings but are edifices that transcend the banal, the commonplace, the simply utilitarian. … Architectural follies transcend barriers of style, time, taste, and nationality. They spring from those most human of emotions: vanity, pride, passion, and obsession.” 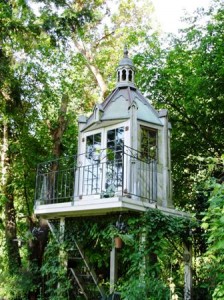 In another view from Virginia Tech Professor Paola Zellner, she says the definition of a folly has changed over time. In 18th century English gardens… a folly was often a literal rendition of a fortress or classic ruin that sat as an ornament in the landscape. “The way that we interpret it now is a playful construct that has no defined use,” Zellner said. “So without the burden or complexity of use or program, it opens up the freedom for true exploration of design.”

Now I agree with Professor Zellner about artistic freedom of expression in folly design, but I do like things to earn their keep too. So I constructed a folly of my own, and although I didn’t know its proper name at the time, the neighbors seemed to! Anyway in upstate New York, it was no Roman ruin that I dragged home.

Instead it was a weathered 20-foot length of wooden dock floating in our lake. It looked like a side of a cottage. Hauled it ashore. Near the garden, I planted three 4×4 posts in a line and hung this reclaimed dock on them. Painted it barn red. Salvaged a window frame intact with glass and installed it in this now “new” wall. Painted that periwinkle. Added yellow shutters. And a yellow window box full of annuals. And at night lit a candle in the window. Ta-dah! Not quite a hunting tower, but my slightly-purposeful original folly hid my unsightly compost pile. Plus, it added color to the flowerless winter landscape.

Make Your Own Folly

So, I’m suggesting that you too can folly. Maybe you already have, you rascal. Here’s why you should and could: 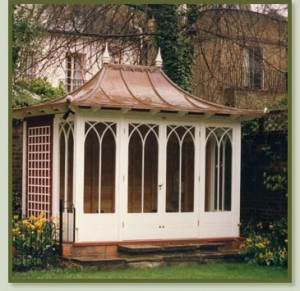 Outdoor rooms for show: Maybe a gazebo-like structure that has radical details. Or a simple structure over your hammock to keep falling acorns out of your snoozing mouth. With Christmas tree ornaments for highlights? A holly folly? Or surround an outdoor kitchen with window shutters in food colors. (eggplant, romaine, squash and tomato.)

Outdoor facades to conceal: Compost heap conceal. Potting bench conceal? Neighbor’s ugly trashcan conceal? Or an unorthodox potting/tool shed with an overhang to properly shade you while you direct your spouse’s garden labors. (You do have People magazine to read in the garden, no?).

Try to overcome your Puritan roots: And I don’t suggest that you should garden, cook or plant in the nude, although it’s an idea worth exploring in future columns. No! Pay attention! I mean construct a shock-surprise piece
of folly art in an incongruous color or shape. Light it up too. Now you’re in full 24/7 folly mode.

Look behind the Mall: Your personal folly can be basic 4X4 posts but there’s nothing like tossed out dress mannequins or odd-ball display racks to set them off. Or visit your local house-wrecking company to find great architectural oddities. Then paint them Construction Yellow with eggplant trim!

Now I’m thinking that maybe everybody ought to have a folly for artistic expression, to screen a view, for storage or to have a private place of ultimate whimsy to retreat to when you want to do absolutely nothing at all. Someplace where life’s editors can’t disturb you.