Nashville has been on my radar since I encountered Taylor Swift at the Spaghetti Warehouse, after her first album release in 2006. My family and I stopped through Nashville for 24 hours during our road trip to the North East. Since then, Taylor is not as easily spotted, and Nashville is one of the ten fastest growing cities in the the United States. For our first year wedding anniversary, my husband and I couldn’t think of a better place to to celebrate and ring in the new year. 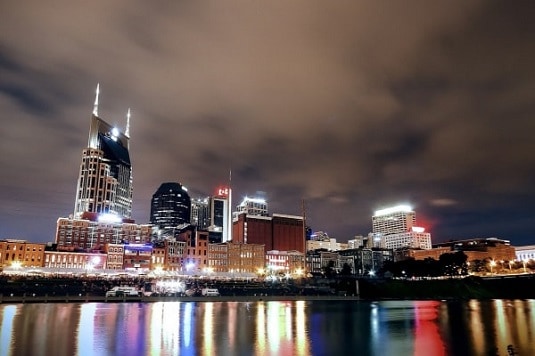 When we arrived, during the last few days of December, we were welcomed with cool, crisp air, refreshing southern kindness, and hospitality. After obsessing about the signature scent permeating the lobby of our hotel, the Westin in Downtown, we started out on foot, to explore the area.

Our taste tour began at Whiskey Kitchen with hot chicken, then moved on to Saint Anejo for a hibiscus margarita. Both owned by restaurant group M Street, we planned to visit the remaining concepts at a later time. Like pilgrims in the new country, we covered the entire “Gulch” neighborhood. Hip restaurants, coffee shops, street art, and more, we could not wait to see what else Nashville had to offer.

My husband and set out to find the best hot chicken Nashville had to offer. Many places were tempting, but Hattie B’s took the title. Perfectly seasoned and with a heat that was just right. We did not even sit down for a full five minutes before it was gone. And good thing, as others were hovering, and bumping in the crowded restaurant, with a hungry line. Another one of our favorite spots was Old Glory. A speakeasy hosted in a renovated boiler room with delectable craft cocktails and plates to share.

When Friday came along, we started our celebrations early. To kick off our anniversary eve, we shared a delicious brunch at the Butcher and the Bee. After a highly recommended tour of the Johnny Cash Museum, we began our bar hop along broadway. The talent inside of each establishment was mind blowing. The crowd was just as impressive. Each member was engaged and excited to sing the words to every song requested. While every place is unique, we recommend Mellow Mushroom, Tootsies, FGL House, Acme, and Tin Roof. The night was capped off by one of the best meals either one of us had tasted, at Kayne Prime Steakhouse. We splurged and ordered several melt-in-your mouth sides including the cream corn brulee, and the Progression of a New York Strip: 3 oz of Japanese Wagyu, American Wagyu, and (my favorite) the Australian Wagyu.

The day of our Anniversary was relaxing. We took our time getting outside, (as the temperatures were dropping significantly) and took our time going in and out of guitar and record stores, and returning to some of our favorite bars for more live music. We enjoyed a 7-course and wine paired meal at the Tartufo, where we were serenaded by italian language and a piano. The only table seated in the parlor, it was as if it were a concert just for us. We ended our evening at the top of the Thompson Hotel. This hotel bar is one of my favorites. With an industrial vibe and gin inspired drink menu, it is a spot that I know Gatsby would have approved.

New Years Eve in Nashville was one for the books. We met friends at Pinewood Social, (a great local spot) for incredible food coffee and bowling. Then of course, shared a few beers at FGL House while listening to one of our favorite reocurring bands. At last minute, we decided to cheer on the Jacksonville Jaguars against the Tennessee Titans before returning to our hotel to get ready for the ball drop. We came across an exclusive lounge provided by the M Street establishments, where we were able to bounce between the venues of our choice. With champagne, glitter and balloons galore, it was a party like no other.

New Years day was the last of our time in Nashville. We were warned that it would be hard to find an open table the morning of, so we settled on a local diner instead and watched highlights from the football games that had occured that week. We took our time walking through a used guitar and ukulele store, laughing as my husband strung them all, while writing impromptu songs. Hours before our flight, we finally found the best BBQ in Nashville. Martin’s Barbeque. Order the brisket tacos, you will not be disappointed.

Our visit to Nashville seemed to go by too fast. On our way to the airport, our uber driver stopped in front of the famous “what lifts you” graffiti wall for us to take a picture in front of to commemorate our time. There are not many places that we have been eager to return to, but Nashville…we will see you again soon.

Chelsea is a hairdresser by day, and word/media enthusiast by night. A graduate of the University of South Florida, Journalism and Creative Writing were at the top of her studies. From food, hair and beauty, to fashion and home décor, Chelsea elates in writing colorfully with a strong voice. Aside from fresh cut flowers and snuggles from her pup, Jade, traveling and eating through new cities with her fiancé is her favorite thing to do. “I love to get lost in a city. When I immerse myself in a new environment and culture, it is easy to notice inspiration everywhere. I find appreciation for simple things like walking a city’s downtown on a Saturday morning, latte in hand, with no place to be.”