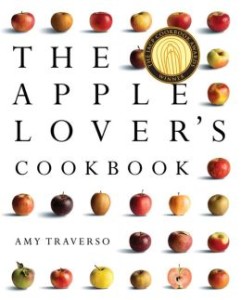 I dream of apples, I really do. I am in search of great apple pie everywhere I travel. I knew from the first bite that the apple pie at Mom’s Apple Pie in Sonoma County, California, would be the best and yes – it is. And now, I have the best apple-anything-book in print, with beautiful photos and recipes that are sure to be treasured and handed down for generations.

Consider this grand book an encyclopedia of all things apple – Delicious, Macintosh and Jonathan Gold. I feel a kinship to the author who grew up very close to my own home town in Connecticut, where apple picking in the autumn was as traditional and anticipated as the first warm apple cobbler that mom made on a Sunday afternoon.

Like the author of The Apple Lover’s Cookbook, I was married near an apple orchard. We decorated guest rooms at The Apple Tree Inn with apple cider candles, apple candies, tiny jars of apple butter and yes, an apple pie waiting in each guest room. While New Englanders long thought they had cornered the market on all things apple orchards because of Thoreau writing about his love of the New England coastal apple orchards, “Every wild apple shrub excites our expectation thus, somewhat as every wild child. It is, perhaps a prince in disguise. What a lesson to man!” 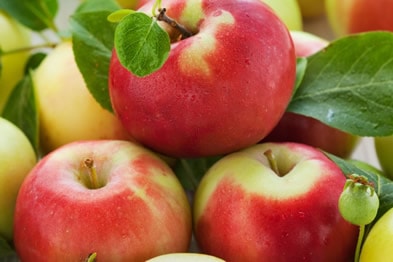 In the early settlements, author Amy Traverso explained that apples were not just a sweet table fruit but also a source for apple cider vinegar; used in preserving. They provided hard cider to drink and from cider came distilled ciderjack which was used as a spirit, a preservative and an anesthetic. It was a big source of commerce and income for early settlers.

Today Washington State is the largest apple producer, while New England boasts some of the most distinct varietals, certainly some of the oldest. Varietals range in the hundreds with new hybrids emerging from even China. But, tell that to an old Bostonian with a record dating back to the 1600s of fine new apple varietals growing in Roxbury, Massachusetts. 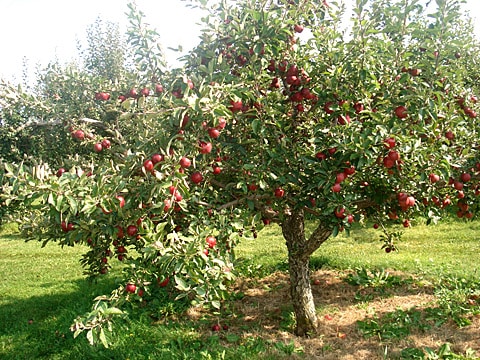 According to Traverso’s book, your tools of the trade to be an apple baker are quite simple. You will need: apple corer, peeler, slicer, biscuit cutter, mandolin slicer, melon ball scoop, and a zester.

The recipes in this fairly comprehensive book range from soups and starters to poultry, meat and fish entrees to pancakes, donuts, biscuits and breads and my favorite chapter –  pie, crisps, cobblers and betties. Each chapter has engaging stories about local farms from Lebanon, Massachusetts to Ogunquit, Maine. You can almost  smell the aroma of the apples simmering in cinnamon and the crust being cut with butter and sugar. This is the apple lovers everything-book and limiting my favorite recipes to three do not even begin to show the depth of a grand apple book such as this. Place it on your kitchen counter or coffee table for display next to a bowl of local and colorful farm-fresh apples and a good apple peeler.

(from The Apple Lover’s Cookbook. Makes about 18)

Canola or safflower oil for frying

In a large bowl using a hand-held mixer or standing mixer with the whisk attachment, beat together the sugar, and butter until the mixture is pale and fluffy, 4 to 6 minutes. Add the eggs one at a time, beating for a minute after each. In a medium bowl, whisk together flour, salt, baking powder, baking soda, cinnamon and nutmeg; set aside. Pour the buttermilk, boiled cider , and vanilla into the sugar-butter-egg mixture. Mix well, and don’t worry if the mixture looks a bit curdled; it’ll smooth itself out. Add the flour mixture and gently mix just until fully moistened. The mixture may appear a bit lumpy, but the most important thing is not to over mix.

Line the baking sheet with wax paper with wax paper or parchment and dust generously with flour. Turn the dough out onto one baking sheet and gently pat into a ¾ inch thickness. Sprinkle dough with additional flour, cover with plastic  wrap and put in freezer for 10 minutes to firm up. Remove the dough from the freezer and use a lightly floured 3-inch donut cutter to cut out about 18 donuts with holes. You can gather the scraps and re-roll as needed, but you may need to chill the dough more to firm it up. Put the cut donuts on the other baking sheet as you go, the transfer to the freezer for 5 minutes to firm up again. Preheat the oven to 200-degrees and set a rack in the middle position. Set  a plate lined who paper towels nearby. In a Dutch oven or large pot; heat 3 inches of oil to 370-degrees. Drop 3 to 4 donuts into the oil, being careful not to crowd the pan since this lowers the temperature. Cook until browned on one side, about 1 minute, then flip over and cook until brown on that side, about 1 minute more. Transfer the donuts to the paper-towel lined plate and keep warm in the oven as you cook the rest. Repeat with the remaining dough. When the donuts are cool enough to handle, but still  warm, sprinkle all over with the cinnamon-sugar. Serve immediately.

Suggested apples mix of McIntosh or Jonathan, with farm-sweet ones such as Jazz or Ginger Gold. The tender apples cook down and create a thick sauce, in which the firmer slices are suspended- a mixture of smoothness and texture.

Cored and cut into ¼ inch thick rings or slices.

Preheat oven to 350 degrees and set a rack on the middle position. Arrange the sliced apples in an even layer in a baking dish. Set aside. In a large bowl, whisk together the flour, baking powder, salt and sugar. Add the eggs and using a fork or pastry cutter work in until crumbly. The mixture will look like streusel, with a mix of wet and dry bits. Spread the topping evenly over the apples then drizzle all over with the melted butter. Sprinkle with cinnamon and sugar and bake until the topping is golden brown and apple juices are bubbling. About 45-55 minutes. Let cool 20 minutes and serve warm from the pan.

Keep the oil at about 370degrees to prevent the latkes from turning greasy.

Homemade apple sauce (for the traditional side)

Using the coarse side of a box grater or food processor fitted with a medium grating disk, grate the potatoes, apples and shallots. Toss together in a large bowl. Add the eggs, matzo meal, salt and pepper and toss to mix well.

Preheat the oven to 200 degrees. Pour 1/4 inch of oil into a skillet over medium-high heat. When the temperature reaches 370-degrees, scoop ¼ cup potato mixture from the bowl, then gently drop that mixture out onto a wide spatula. Press into a patty about ¼ inch thick with your hand then gently slide the pancake into the hot oil. Cook three or four pancakes at a time until the edges are crispy and well browned and the undersides are golden brown. About 2 to 3 more minutes. Transfer the pancakes to paper towels to drain the grease then arrange on baking sheet and keep warm in oven until the remaining pancakes are cooked.