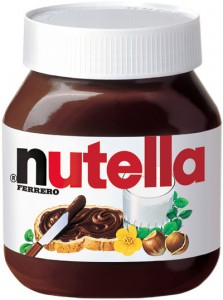 In the past Americans who went to Europe for long periods of time grew so desperate for peanut butter that they tried the local bread spread called Nutella. The hazelnut-chocolate spread grew on them and soon Americans craved Nutella when they came home. The food industry responded (slowly) and now Americans can find Nutella on supermarket shelves right next the peanut butter. In fact, Nutella has become so popular that big-name peanut butter makers are now concocting their own Nutella-like products. Jif has one that sells for about $4 for a 14-ounce jar. Look for more peanut butter brands to do the same. The food service industry has also caught onto the trend and now Nutella is on the kitchen shelves of restaurants both large  and small. Those jars are super-sized.

Nutella was created in the 1940s in Italy by Pietro Ferrero, a pastry maker. Because of World War II chocolate rationing, Ferrero extended the chocolate flavor by combining hazelnuts and chocolate. Hazelnuts were plentiful in the Piedmont region of Italy. The original version of Nutella was a paste packaged as a bar wrapped in foil, but later Ferrero altered the product so that it could be stored in a jar and was more spreadable. He didn’t officially name the product Nutella until 1964. In 1983 Nutella was distributed in the Northeastern part of the United States as a test. America said yum. The popularity of Nutella has grown steadily and now Nutella is available throughout the nation. And it’s increasingly appearing on restaurant menus as an ingredient in crepes and other desserts or as a topping for pancakes and waffles.

Nutella makes no claim to being a health food and it’s not. Although it’s gluten free and contains no peanuts, Nutella is made with palm oil and a 2-tablespoon serving contains 200 calories (100 fat calories). Other ingredients are sugar, hazelnuts and cocoa along with emulsifiers and artificial flavoring. It’s meant to be a sweet treat. And it is. It’s delicious spread on raisin toast or a waffle. 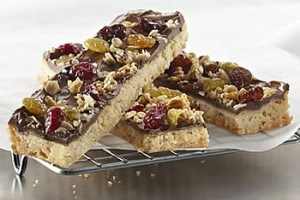 Preheat oven to 350°. In mixing bowl equipped with a paddle, cream butter and sugar until light (about 3 minutes). Add flour and gently mix into creamed butter-sugar mixture. Pat dough into an even layer inside a ¼-size sheet pan sprayed with non-stick cooking spray. Cover and refrigerate 1 hour. Meanwhile, In bowl, combine granola and fruit; cover and hold until ready to use as directed. Poke dough evenly over entire surface with a fork and place pan into 350° oven on middle rack and bake 20 minutes. Rotate pan and continue baking another 10–15 minutes, or until edges turn golden brown and top is golden. Remove from heat and let stand 10 minutes. While still warm, gently spread top surface of baked shortbread with Nutella to create an even layer that covers the entire surface of the shortbread. Sprinkle top evenly with reserved granola-fruit mixture and cool to room temperature. Cover and refrigerate at least 2 hours before cutting into 12 rectangular bars. Serve at room temperature.