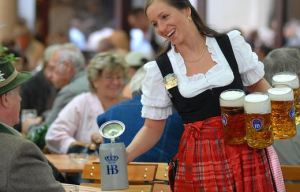 Though the first Oktoberfest celebrated a 19th century princely betrothal, the Autumn festival in today’s popular imagination represents beer, sausages, pretzels and merriment consumed in abundance at home or at a local restaurant or ale house. As world beer authority Michael Jackson wrote of reveling in Munich, “Afterward, the head can be cleared on a side-trip to an Alpine village, where beer might be more thoughtfully enjoyed.”

I suggest finding an Oktoberfest (Marzen) beer – Hacker-Pschorr is an exemplar – to thoughtfully enjoy on its own, or pair its malty/sweet accents and firm structure with grilled meats or spicy fare. 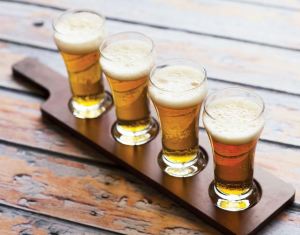 The availability of sundry domestic craft and world brews can overwhelm shoppers who are not aficionados. With choice comes opportunities, but how can the home cook determine which beers will complement recipes as ingredients and table beverages? Here are two suggestions.

Think balance. Satisfying meals harmonize sweet, salty, bitter, sour, and piquant. Once you know a beer’s characteristics you can predict how it will elevate, contrast, or echo flavors in your courses. Consult a guide in a book or online to assist your matchmaking.  Remember that dominant components in the beer will become more concentrated and pronounced through cooking. 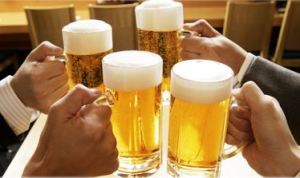 A few personal observations: a commercial, bantamweight beer can be as satisfying in a meal as a $3-per-bottle specialty microbrew. I once ate an obscene amount of Louisiana spicy boiled crawfish chased with Mexico’s Tecate and a squeeze of lime. The beer was a splendid palate refresher that kept me returning for more brow-mopping heat. A high-alcohol beer will fan a pepper’s flames. An average lager will also show well mixed in a bloody Mary.

Wheat beer’s acidity, fruitiness and lack of bitterness will flatter a broad range of dishes. It has the backbone for grilled and barbecued meats and the subtlety for sushi. Look for a German or Belgian producer. American wheats can be delightful, too, but they lack the yeasty notes (clove, apple) of Old World classics like Hefeweizen.

Give your wines the month off and throw a beer and cheese party. Brine your next grilled chicken in a beer marinade. Sip a barley wine from a champagne flute while watching Downton Abbey. Embrace Michael Jackson’s challenge: “The search for the perfect pint should last a lifetime.” Amen, brother.

Devotee’s of the irreverent, rouges-with-a-brough, Brew Dogs on TV’s Esquire network appreciate that beer is a ready vehicle for additives sublime (lobster) and ridiculous (sweat). It is one reason why beer has great palate range. If you are just beginning to explore beer in cooked dishes you can’t miss with the following, a recipe from the home of Guinness Stout.

Kevin Dundon’s Modern Irish Food (London: Mitchell Beazley, 2013, $24.99 US) marries pale ale and cheddar with bacon officiating. What is not to like? Sierra-Nevada Pale Ale would be my suds of choice in this recipe. 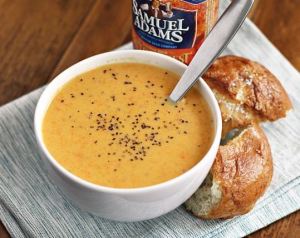 Drizzle olive oil in a large saucepan and add bacon lardons. Cook over medium heat 5-6 minutes. Remove the bacon from the pan and set aside. Add celery, onion, garlic, chile and thyme to pan and cook gently until softened. Pour half of the pale ale into saucepan and cook until liquid is reduced by half, then add chicken stock and simmer 15 minutes. In a separate saucepan melt the butter and add flour and cook moderate heat until flour is slightly browned, stirring continuously. Add the roux to the soup, return to a simmer, then cook, stirring until smooth, for a further eight minutes. Pour remaining pale ale into the pan and add the cream, then stir in the cheese. Stir until the soup has thickened, then season with salt and pepper to taste. Return the lardons to soup and serve immediately.