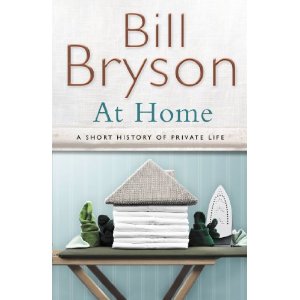 In his new book At Home, history lover and gleeful researcher Bill Bryson investigates the evolution of various rooms on the house, a project inspired by his own purchase of a vintage rectory in Norfolk, England. While exploring each room of his new-old house he began to wonder why humans live in houses and how certain spaces in modern dwellings came to fulfill specific functions.

Bryson shapes his storytelling by going back to 1800s and marching forward but he also pauses for deep background, mining information from Medieval times to explain why, for example, the hall was once the major, and actually the only, room of one’s house. Today the hall is just an entrance foyer or nondescript passageway, a sad demotion for a space once so all important.

I went straight for morsels about the kitchen and the dining room given that this online magazine is dedicated to cooking, recipes and the pleasures of the table. In these chapters (and you don’t have to digest any of the self-contained chapters in the order Bryson places them) I read that the kitchen of earlier days was deliberately separated from the rest of the house for obvious reasons – the potential for fire and odors. So from antique times there was always the challenge of having food arrive hot to the table.

In the 1840s the availability of ice and later refrigerated railway cars made a huge difference in how food could be stored, preserved and moved across the nation giving home cooks menu options they never dreamed of before. In 1845 Eliza Acton wrote a cookbook (Modern Cookery For Private Families) in which she gave actual measurements for ingredients. Well, that started a trend didn’t it, and, of course, ushered in practices of standardization for cooking at home. Cute measuring cups followed.

In times past, when a host entertained the guests for a meal they ate wherever they wanted to often leaving grease marks and wine spills on expensive upholstered furniture. Sometimes people assembled on stools with a long board across their laps. Fortunately, actual tables and chairs came into being for the sake of convenience and soon the dining room became a room with a purpose. The best dining rooms chairs had no upholstery because maintaining bare wood chairs meant easy clean up. The mistress of the house was no fool.

Bryson tends to roam and his domestic history lessons are organized somewhat like his rambling eccentric manse. He starts out to make a point and then digresses as if compelled to share everything he’s learned, whether or not it has has any real place in the specific room he’s talking about. While he’s in the dining room, for instance, he can’t resist musing on the subjects of scurvy, Ferdinand Magellan, the Boston Tea Party and the invention of the umbrella. Still, Bryson is droll and I didn’t mind following his wandering mind.

Bryson might begin talking about food contamination and additives commonly used to stretch say flour, butter, sugar or milk which leads him to cookbooks, and then to the controversy surrounding the potato. Some foodies of the time considered the potato unwholesome because it grows beneath the ground and isn’t mentioned in the Bible. Before you know it Bryson is into the Irish and their economic and political dependence on potato farming and the potato famines that ruined the nation several times.

And did you know that Thomas Jefferson is credited with inventing the French fry and that at Monticello, he grew 23 varieties of peas?

There’s all that plus more rooms (bedroom, cellar, bathroom, study, etc.) in Bryson’s engaging and informative survey. Read it all or just read about rooms you care the most about. You’ll learn something and I promise you won’t be able to resist the urge to divulge some amusing room fact at the next cocktail party where you’re a guest. Personally, I’m telling everyone I know about Thomas Jefferson the the French fry.