Bake And Destroy by Natalie Slater is not your average vegan cookbook. This colorful paperback tome has photos of tattooed men and women, funky illustrations, a forward written by a pro wrestler, and a baker who loves football and video games.

In writing this book and choosing recipes Slater said, “I wanted to inspire people to try new things in the kitchen with a no-holds-barred approach. Food tastes better when you have fun making it, so why stress over whether or not it’s perfect”? Years ago, Slater transitioned to a mostly plant-based diet and started collecting and creating recipes that fit a vegan lifestyle, but these recipes are entirely good-tasting and deliciously self-indulgent. The text skews young and Slater’s audience is probably the 20 and 30-something vegans. Limited kitchen experience is fine.

Slater’s favorite dessert is the cupcake and her recipe for Banana Bread French Toast Cupcake took her to the Food Network where she was a judge on the TV show Cupcake Wars. That award-winning cupcake recipe is in the book along with pies, cakes, donuts, sauces, muffins, smoothies and granita. Additionally, Slater has recipes for vegan party foods, sandwiches, tacos, pizzas, snacks and kale chips fixed five different ways.

Bake and Destroy is fun to read, the recipes are a bit unusual and the photos of finished results are helpful. The ingredients lists are not complicated and the directions are easy enough for a novice cook. And I love the names Slater gives to some of her creations such as Crouching Cornbread Hidden Broccoli or Bike Messenger Brownies or You Don’t Know Jack Hash. Her sense of humor is as cheeky as her recipes. 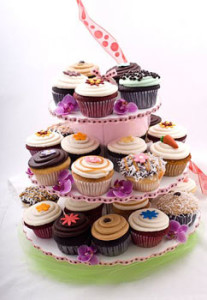 Preheat oven to 350 degrees and line a 12-cup muffin pan with paper liners. Throw your mashed banana in a blender or just smash it with a fork. Sift the flour, baking soda, baking powder, cinnamon, salt and sugar into a large bowl and mix well. In a smaller bowl, whisk together the oil, rice milk, vanilla, almond extract and mashed banana. Stir wet ingredients into the dry. Small lumps are fine. Finally add the walnuts, folding gently. Fill the liners two-thirds full. Bake for 20-22 minutes or until the tops spring back when lightly touched. Let cool in the pan on a wire rack for 10 minutes, then remove from the pan and let cool completely before frosting. To make the vegan maple buttercream frosting, beat all the ingredients together in a bowl until light and fluffy.

In a food processor, blend the tofu, lemon juice, onion, garlic, onion powder and Vegeta seasoning until smooth. Add the spinach, kale and water chestnuts and pulse three or four times (you want chunks and bumps.) Cover the bowl with plastic wrap and refrigerate for at least two hours. Serve with bread, pita chips or veggie sticks. (note: No Vegeta seasoning? Use seasoned salt or celery salt instead.)