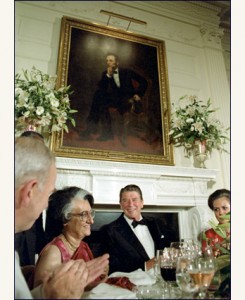 Have you noticed that no one is having any culinary fun in this political campaign cycle? People need to lighten up and there’s no better way than to gather friends around a table to eat something that tastes delicious which also references politics and history. I’m talking about how First Families entertain at White House dinners and how master chefs who heed the needs of the Oval Office manage to regularly stage beautiful and memorable meals. Now you can get in on the high-style fun. With none of the work.

Chef and presidential historian Larry Barrett, who is based in Sarasota, Florida, has come up with an entertainment concept that is pertinent to our times. Chef Barrett, whose catering company is called Simply Gourmet, stages dinners for people who want to re-enact presidential White House dinners of the past. Chef Barrett believes that everyone ought to enjoy eating like a US president or a visiting dignitary from a foreign land. Think of the glamour, the clothes, the protocol, the insider Beltway gossip. And you can be there. On the A list.

Chef Barrett stages these dinners all over the country for as few as 50 people and as many as 250. Political junkies or hostess with a flair for the unusual hire him for public fundraisers or just for private-party fun. Chef Barrett re-creates the White House meal that the host selects and supplies everything from printed menu to decorations to the delicious courses themselves. He’ll even provide the appropriate toast for the host. The cost is about $200 per person. 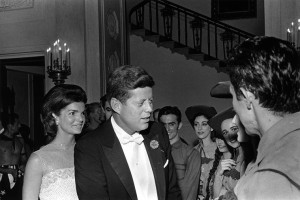 Besides presidential dinners Barrett has traveled the world doing other theme dinners for a crowd. The chef has presented the cuisine served at the Governor’s Ball, the Titanic, the Queen’s Royal Tea and Delmonico’s Restaurant (America’s first fine-dining restaurant). When he’s asked to do presidential dinners, the most often requested ones are those that were hosted by President John F. Kennedy and his exquisite wife Jacqueline.

“Jackie Kennedy was first to seat guests at round tables,” revealed Barrett, in a recent interview. “It was also her idea to separate spouses so the conversation would be more diverse. The First Lady also limited state dinner menus to four courses. I’ve had several people request the meal that the Kennedys hosted for Princess Grace of Monaco in 1961. Everything about that particular meal is elegant and beautiful.”

But for the Republican National Convention coming up in Tampa, Florida, in late August, Barrett suggests that visiting GOP delegates and their friends re-enact the dining experience that Ronald and Nancy Reagan hosted for Mikhail Gorbachev on December 8, 1987. “The menu included salmon and lobster medallions with a caviar sauce,” said Barrett. “There was veal loin with a wild mushroom and champagne sauce too.” 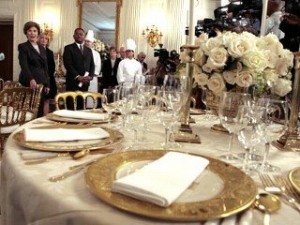 Chef Barrett looks at these White House dinners as a great way to celebrate food, life and American history. “Some of the guests dress in the spirit of the era,” said Chef Barrett “and they research the guest list. Participants can get as deeply involved as they want too and I’m always there to supply some funny stories about White House dinners and the particulars of the dinner that the hosts have chosen.” Secret Service protection is not necessary.

“Did you know that Hillary Clinton was the first to mandate plated meals instead of butlers passing platters of food to seated guests?” revealed the chef. “She saw one too many pieces of chicken land on the floor or on a guest’s lap and she did something about it, serving plated courses the way fine restaurants do.”

The chef also divulged that Thomas Jefferson was the first president to serve a buffet at the White House. He loved French food and ate the best of it when he was an Ambassador to France from 1784-1789. America’s third president cared so much about fine food that we went shopping with his servants and he dined with a dozen guests every day. Jefferson ate more vegetables than meat and grew his own produce at Monticello.

Richard Nixon served only French wines for his presidential dinners and liked to try different ethnic foods. Rutherford B. Hayes served no wine at all.  Lyndon Johnson started the Tex-Mex craze in America and meals at the White House during the Franklin Roosevelt administration were so bad that Chef Barrett has no interest in dredging them up. “I don’t do President Ulysses Grant’s dinners either,” said Barrett. “Grant hired an Italian chef who devised up to 29 courses for typical White House state dinners. People sat there all night.” Grant’s favorite breakfast was a cucumber soaked in vinegar.

Chef Barrett noted that Jimmy Carter and Roslyn loved to make soup together in the White House kitchen as a form of relaxation. Carter’s favorite was vegetable with eggplant. “George W. Bush had a pretty simple palate,” said Chef Barrett. “Every day for lunch he either had a BLT, grilled cheese or peanut butter and honey sandwich with Lays potato chips. You don’t need me to create that meal. You can make that one yourself at home.”

Below are two recipes served at the Kennedy White House event for Princess Grace of Monaco in 1961. 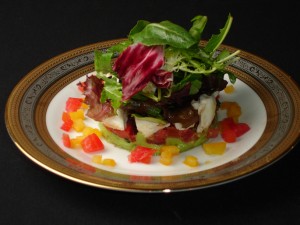 Combine all ingredients and toss lightly.

Divide all components into six equal portions. Place the avocado mousse on a plate first. Place the tomato salad on top of the avocado. Place the crab on top of the tomato salad. Preparing the vinaigrette right on the greens makes for a delicious, light dressing. Place salad greens in a bowl and drizzle citrus vinaigrette ingredients on lettuces. Start with salt and pepper, then add citrus juices, then add olive oil. If you add the olive oil first, it will coat the greens and not combine well with the juices. Toss lightly with your hand (to keep the lettuces from bruising). Form into small mounds and place on top of crab. 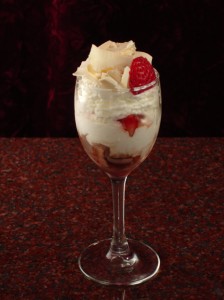 Beat ingredients until stiff and chill.

Place two squares of chiffon cake in a parfait glass (or martini glass), place a couple of tablespoons of macerated strawberries with their juice on top of cake.  Spoon chantilly cream on top of berries.