Thanks to Kathy Witt, the award-winning travel and lifestyle writer for these delicious contributions.

In a world gone topsy-turvy by a pandemic, comfort food comes to the rescue, calming nerves and nourishing the soul. This week, we welcome signature recipes from the Bluegrass State. Georgetown, Kentucky’s Local Feed is a popular restaurant and their acclaimed Chef Justin Thompson generously contributed his recipe for an American favorite. Is there anything melted cheese doesn’t make just a little bit better?

Boil and strain pasta. Bring heavy cream to a simmer. Season to taste. Add American cheese slice by slice, followed by smoked Gouda, stirring slowly. Season to taste. Fold in pasta and place in your favorite casserole dish or cast iron. Sprinkle breadcrumbs on top and bake at 425 degrees until golden brown. Tip: If cheese sauce is a little thick, rinse out the cream container with 1/2 cup of water, then add a tablespoon of it at a time until desired thickness.

Local Feed is across the street from Royal Spring Park in downtown Georgetown, where legend has it that Rev. Elijah Craig first made bourbon in 1789.  Craig was also the first distiller to use charred oak casks, which gives bourbon its beautiful color and distinctive taste. These troubled times become easier to endure with a little Bourbon from time to time.

Fava’s, a Georgetown diner that has been around since 1910, serves what Kentuckian’s call “down-home delicious,” like fried catfish, thick-cut bologna, pimento cheese sandwiches, loaded chili cheese dogs and signature country breakfasts. Fava’s also has its own version of what Kentuckians hail as one of the state’s most beloved culinary masterpieces, the Hot Brown.

The 146th running of the Kentucky Derby may be postponed until September, but there’s no reason we shouldn’t enjoy some Derby favorite’s now. The Beaumont Inn is Kentucky’s oldest family-operated country inn and a James Beard America’s Classic Award recipient. Located in Harrodsburg, they shared two classic recipes. The Mint Julep is the official drink of the Kentucky Derby where nearly 120,000 of these bourbon-based libations are served over the 2-day Derby weekend at Louisville’s Churchill Downs. Country ham biscuits-a revered Kentucky culinary tradition- has a prominence around the “greatest two minutes in sports.”

You’ll enjoy these recipes from The Beaumont Inn Cookbook. 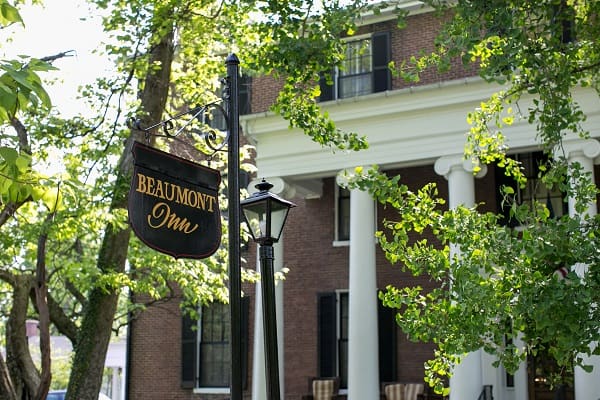 For the Simple Syrup: Put equal parts sugar and water in a saucepan. Bring to a boil, stirring until sugar dissolves. Remove from heat; add a generous handful of fresh mint. Allow mint to rest in simple syrup. After 20-30 minutes, or when syrup has cooled, strain mint from simple syrup.

For the Mint Julep: Fill a tall glass with crushed ice. Pack in as much ice as possible. The traditional recipes call for 2 parts bourbon to 1 part simple syrup. We usually mix ours 1 to 1 because most people like them sweeter than traditional, so for the Beaumont Inn Mint Julep, add 2 ounces bourbon to a tall glass of ice, and add 2 ounces simple syrup. Add a large sprig of fresh mint and sturdy straw. Crush the mint with the straw to the bottom of the glass. Then sip away!

Dissolve mustard, sugar, salt and flour in water. Beat eggs and vinegar in the top of a double boiler. Add the dissolved ingredients. Cook and stir the dressing over boiling water until thick and smooth. Add butter. Use for chicken salad, coleslaw and country ham salad. (Egg whites may be frozen and saved for other recipes.)

Sift dry ingredients. Cut the shortening into flour. Make a well in the center of the flour and put milk into the well. Stir until the dough cleans the bowl – not over a half minute. Knead it for a half minute. Pat it out on a floured surface to about 1/2 inch or to desired thickness. Cut with 2-inch biscuit cutter. Bake at 425 degrees for 10 minutes or until golden brown. Leftover biscuits can be stored in a tin or frozen and enjoyed later.

[author] [author_image timthumb=’on’]https://www.mycookingmagazine.com/aboutdoclawrence.jpg[/author_image] [author_info] Old school journalism describes the style and stories produced by Doc Lawrence. “In everything I do,” he says, “there is a beginning, middle and an end.” One of the top travel writers in the country, Doc is steeped in the heritage of the deep south. Traveling the back roads from Texas to Virginia and on down to Key West inspires stories about local food and wine preferences, community theater, folk art and music often leading to clues for a good story. Heroes include Faulkner, Hemingway, Marjorie Kinnan Rawlings, Ralph Ellison, Dorothy Parker and Willie Morris. An Atlanta native, Doc keeps a well-stocked wine cellar and bar and two outdoor grills. He enjoys entertaining and believes that the greatest challenge for a writer is to keep searching for a higher life. www.thegourmethighway.com | doclawrence@mindspring.com [/author_info] [/author]