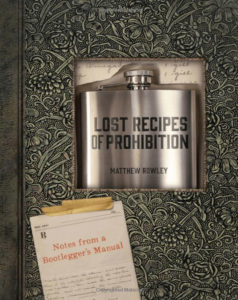 Conjuring up images of speakeasy sneak-arounds and bathtub gin, Matthew Rowley’s Lost Recipes of Prohibition is as much a cookbook as it is an indulgent secret diary.

Learn how to whip up bitters, triple secs and cocktails with the ease of a backroom bartender, and feel like you’re getting away with something wonderfully forbidden.

Inside the book are 100 formulas from the American Prohibition era that have been largely forgotten—everything from cordial how-tos to the ins and outs of homemade moonshines. The recipes were plucked from a hidden journal that was found inside an antique poetry book, and it contained 300 entries on making liquors, wines, absinthes and other libations. Lost Recipes includes more than 70 pages from the unearthed notebook, and there are 75 full-color illustrations to complement the text.

It is easy to sense Rowley’s natural passion for the subject matter, not to mention his proficiency, as he takes esoteric material and turns it into digestible, fascinating paragraphs. There is even a generous dose of humor to keep the topics timely and fun.

Take his facts about medicinal alcohol, for example. Rowley writes, “Physicians were specifically allowed to write prescriptions for medicinal alcohol during Prohibition. With scrips in hand, their patients could purchase ‘medicinal’ whiskey, brandy or fortified wines (22% abv [alcohol by volume] compared to the usual 12%-14% from druggists who paid for an annual permit to handle such wet goods. You never saw a nation of such sickly people.”

Ha! Rowley goes onto discuss the history of hard cider, explaining, “Appeasing rural districts was key to passing the 18th Amendment. Early on, one of the bones tossed to their representatives was permission to ferment sweet apple cider. The resulting hard cider, perfectly legal to drink at home, could pack a serious punch.”

And yes, the recipes throughout the entire book pack plenty of punch. After all, these cocktails were crafted during a period of restriction and risky business. Life was hard and so were the drinks. 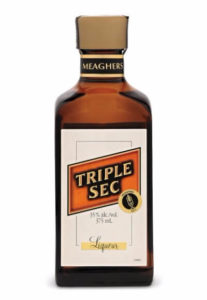 Seattle polymath Mike McCaw is an author, publisher, still builder, distillery consultant, globetrotting explorer, and distiller. Using just four ingredients, he makes triple sec with a highly concentrated flavor that 19th-century liquoristes would have called an essence. For a bottle of full-strength orange cordial, Mike adds a small amount of the concentrate to plain vodka and a bit of sugar. “If you use a mixture of sweet and bitter orange, and less sugar,” Mike advises, “you can make a pretty nice Aurantii Amari clone. Use more bitter than sweet.” 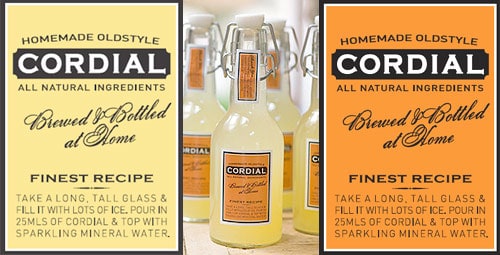 From the stalwarts Grand Marnier and Cointreau to 19th-century-style Pierre Ferrand Dry Curacao Ancienne Methode and Solerno, a blood orange liqueur from Italy, we usually have several gallons of bittersweet orange cordials around the house. Yeah, okay, that’s a bit much. Hush. The thing is, you can drink just fine without orange cordials, but you’ll drink better with them. This simple DIY version makes a nice stand-in when you’re on a budget.

Zest from 2 to 3 navel oranges (about 10 grams)
7.5 g (about 1 tablespoon) dried bitter orange peel
2 cups brandy (see note)
4 whole cloves
600 ml (about 2½ cups) of compounder’s syrup
Pour the brandy over the orange zest and peels in a re-sealable glass jar. Give it a swirl and let it rest for 20 to 21 days at cool room temperature out of direct sunlight. Add the cloves. Let rest for 1 more day. Strain the mixture into a large jar or mixing container. Add the syrup, stir to blend, and bottle. Let the cordial rest for another week before using. Best within 3 to 4 months. Note: Don’t splurge on expensive brandy here. Paul Masson VSOP works just fine and comes in at less than the cost of a cocktail at many swanky bars.