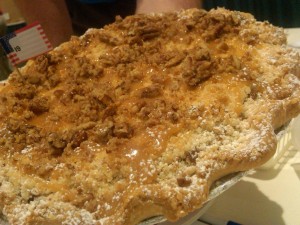 Recently I was a judge at 17th Annual American Pie Council/Crisco National Pie Championships, a huge three-day culinary event that was held in Orlando, Florida. I was one of the judges in the Amateur Apple Division, which definitely appeals to me because I’m always on the hunt for the greatest apple pie in the land. Not too long ago when my husband Paul was on a business trip he carried a pie back on his lap for four hours on a plane because I had read about this particular pie and wanted to try it. Cost of pie, $40. Husband thoughtfulness, priceless. Taste of pie, only so-so. I had better luck in Orlando.

Besides the amateur division, there’s a category for professional apple pie bakers but that’s the final day of the competition and there is also one for commercial pie makers in which judges evaluate mass-produced pies you find in food stores and budget restaurants. I judged that category last year and was seriously underwhelmed at what passes for pie in those places. Poor to terrible. This year was more fun, more delicious and much more rewarding. There were 25 apple pies entered and five judges in my division. In all some 896 pies of all kinds made it to the competition and many of the bakers were repeat competitors. Ages ranged from about 25-75. 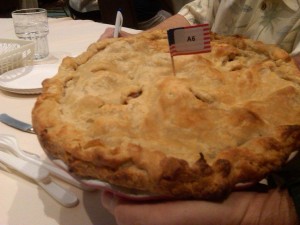 Now, here’s the sex part of the headline. Judges and contestants are mostly female, I’d say three to one. This pie business is mostly a femme festival. In the amateur division, many of the women are traditional “grandmother types,” they wear aprons, are warm and friendly and they are relaxed and at home in a kitchen setting. These competitors are allowed to bake their pies on site, but most do not. They usually bring several pies and enter them into different divisions. Most of these ladies have been making pies all their lives. You just know their home kitchens are lively, good-smelling places where people want to gather.

Besides judging amateurs, I judged in a category of professionals pie makers. It was called “innovative.” And that’s were the lies part of the headline comes in. Honestly, it was a stretch to call these concoctions pies and, believe me, fruit and cream pie purists would not. 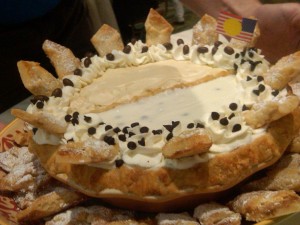 Curry was paired with peach in one of the innovative pies. Another pie was stuffed into a jar (it was mushy and eating it was hard) and still another Italian cream pie was for dipping with twisted wands of crust. Another cream pie had a heap of red velvet cake bits in the center and yet another had chocolate mice (dipped and decorated cherries) running around the top of a pie. That made me uncomfortable.

Pie makers went far afield in the innovative category, but we judges had absolutely no debate about which pie to select as the winner. The recipe is below. If you take the time and trouble to make it, you’ll probably be as surprised and delighted as we were. This is one delicious dessert! Just maybe not strictly an apple pie.

Mix above ingredients just until blended.

Mix all together all crumb topping ingredients by hand or a pastry blender until fine and crumbly.

Mix all above ingredients in a standing mixer on medium speed swiftly until crust appears pea-like. Carefully sprinkle water in crust mix until it starts to become moistened and gathers together. Pat into a disc, wrap and refrigerate for at least one half hour. Roll out on to floured surface and make and crimp crust. Freeze until ready to use.

Spread sticky toffee pudding mixture on bottom of crust. Put apple mixture over pudding mixture. Sprinkle with crumb topping. Bake in preheated 400 degree oven for one hour or until knife easily slides into center of pie with no resistance. If pie becomes too brown before done, turn down oven to 350 degrees to finish baking and cover with foil completely. Top with a generous amount of homemade caramel and praline pecans.

Melt butter in small pan on medium low heat until melted. Add pecans and sugar and stir ingredients until you start smelling the nuts roasting. Take off heat and cool.

2 thoughts on “Sex, Lies and Pies”