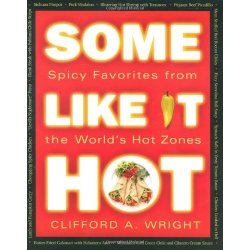 Global warming may be disputed, but there is a consensus on American eating habits – our palates are heating up. Entire stores are devoted to chile peppers and the legion of salsas, sauces, rubs, pastes and edible paint strippers they spawned. Megamarts and farmers markets feature a growing selection of colorful, incendiary chile varieties. Flora and I recently enjoyed a sweet-spicy dark chocolate bark spiked with ancho chile powder.

Why have we embraced the piquant and downright hot?

Clifford A. Wright, in his cookbook Some Like It Hot: Spicy Favorites from the World’s Hot Zones, offers the reader 15 hypotheses as to why humans like spicy foods. Benign masochism? Food preservation? Digestive aid? In the end, Wright opts for the most obvious reasons; chiles taste good, create a pleasing sensation in the mouth and provide zest to bland foods.

Wright’s recipe chapters are arranged geographically, starting with the hottest cuisines of the chile pepper’s point of origin, the New World, then moving to West Africa, Morocco/Tunisia, Yemen, India/Pakistan, Sichuan, and Korea among others. The dishes, “written as if you were eating in those cultures,” range from piquant to thermonuclear. Caution: crazy hot preparations here will literally burn the impetuous or  ill-prepared.

Thanks to well-researched sidebars on piquant cuisine profiles (Thai, Cajun), unusual ingredients (grains of paradise), and spice history and lore (the travels of Leo Africanus) Wright serves up both heat and light. I consider the recipes within reach for a majority of enthusiastic home cooks, though the spectrum of ingredients required across food traditions, both fresh and preserved, is daunting. You might need to order online.

“The use of chiles in Sichuan (China) is, as with all ‘hot’ cuisines, meant to heighten one’s sensation of taste and to open up the palate.” The paradox of fiery food mystifies those who find only numbness and discomfort when consuming chile-laced dishes.

Yet, the pleasures of “hot zone” cuisines are attainable to those who build a tolerance over time. When I prepared Wright’s pungent, penetrating Jerk Chicken recipe for Flora’s delicate palate I discarded most of the ribs and seeds and substituted additional slices from the scotch bonnet pepper’s mild “lobes.” Try Wright’s amazing marinade on half a turkey breast, too.

Place all ingredients for jerk marinade in blender and puree until smooth.

In a large bowl toss the chicken pieces with the marinade. Divide the pieces and marinade between two heavy-duty, zip-lock plastic bags. Seal the bags, pressing out excess air, and let the chicken marinade in the refrigerator, turning the bags over several times, for at least six hours and up to two days.

Prepare a charcoal fire on one side of the grill or preheat gas grill on high for 15 minutes, then turn off one set of burners. If using charcoal, toss three bay leaves on coals if desired. Grill the chicken over indirect heat, in batches if necessary, and cover if possible, until golden brown with bits of blackened skin, about 1 ½ hours, turning now and then and basting with leftover marinate. During the last 30 minutes of cooking keep the chicken breasts skin side up so the meat is further away from heat source, and stop basting. If the pieces blacken too quickly it means the fire is too hot and you should either keep the cover open, push the coals further away, or lower one of the gas burners. Transfer the jerk chicken to a platter and serve.