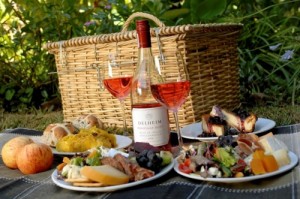 Living as I do, in Florida, tends to make the idea of a summer picnic seem ludicrous at best but such was not the case when my wife and I lived in Santa Fe New Mexico, with the Sangre de Cristo mountains at the very edge of town, and the weather sublime, for three months of the year anyway.

Being as most of our regular group of five worked in theater, the concept of an early start for a picnic was somewhat relative, but start we did, usually about 10 a.m. or so, loading the car, piling in, and heading up into the mountains. Somewhere around 10,500 feet the car would be parked and, each of us overburdened, we would wend our way off the road, down a track, and into one of several glades we liked, where our bounty could be spread. 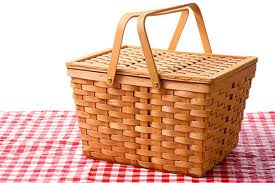 First the checkered cloth, upon which was arrayed the roast chicken or beef, pate and various cheeses along with numerous bottles of white wine which were placed tenderly amongst the rocks in a frigid mountain stream, accompanied by, in order to keep it cool, to me the most important item of all: radish butter, meant to accompany the fresh and very crunchy French baguettes which had been picked up, piping hot, as we left town.

How self-indulgent could any group become, alternating between eating and burping, lazing and dreaming with the only exercise being the retrieval of yet another bottle from the stream, all the while shaded by the delicate pale of the Aspen, and with the view of the Jemez mountains only partially obscured by the haze created as the heat and dust from the Rio Grande valley rising slowly, and then burning away.

Survival remains paramount, and in this case the trick was not to simply find and repack the car, but far more importantly, to negotiate the steep and twisting mountain road without finding ourselves in a ravine instead of home. Survive we did. 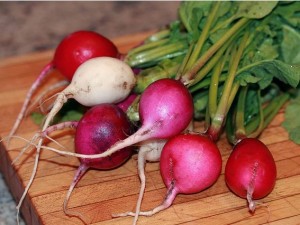 Butter. For the most part we all buy what I refer to as “buerre ordinaire”. For this recipe you will want to branch out into something nicer like: Plugia, Kerry Gold, or perhaps Delitia.

Radishes. Home grown or organic , rather than the standard supermarket fare.

Allow the butter to soften while chopping the radishes. Fold the chopped radishes into the butter and place in your serving bowl of choice. Park in the refrigerator until serving, preferably overnight.