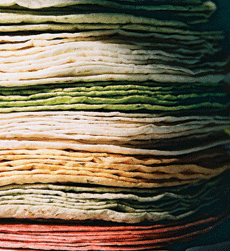 What was just a simple staple food in Hispanic communities in America a few decades ago is now something everyone in America craves in restaurants and prepares at home – tacos. You routinely see taco kits in the grocery store next to taco seasonings and packages of crisp corn tacos and soft flour ones. Velvetta cheese is usually on the same shelf and the rise in taco consumption has been a genuine gift to the manufacturers of that bland cheesy product dismissed by gourmands.

Tacos are on the menus at high-class restaurants (haute fish tacos and veggie tacos are the latest trends), casual dining places and, of course, fast food joints where the owners of these franchises realize that you can create a tasty cheap taco (don’t ask about the meat) and sell it in great volume at a handsome profit. Recently a wedding in our community featured a build-your-own taco station at the reception. The guests loved it.

Tacos are a Mexican sandwich consisting of a corn tortilla (soft or crispy) wrapped around a filling. Today, tacos are everywhere and composed of cuisine combinations that would surprise, maybe horrify, the ancient Mexicans who discovered the food possibilities of corn in 3,000 B.C. in the state of Puebla. By 1529 the tortilla had a place in the book, General History of Things of New Spain by Bernardino de Sahagun. But, before that in 1520 Hernan Cortes organized maybe the world’s first great taco party at Coyoacan. Pork from Cuba reportedly was the entree but tacos stuffed with fish and snail were prominent on the menu.

Tortillas, the taco wrap, are essentially stone-ground corn formed into dough, flattened and cooked on a hot griddle. Early tortillas took hours to make but by the 1960s small tortilla machines could turn one out every two seconds. Suddenly, tacos were on their way to becoming a world-wide favorite food. In Mexico today tacos are generally served in the morning or as a nighttime snack. In America, we eat satisfying and convenient tacos anytime and often on the go. 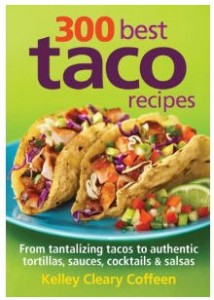 Kelley Cleary Coffeen has authored a new paperback cookbook called 300 Best Taco Recipes and it’s a good one to add to your cookbook shelf. In her book Coffeen says, “…tortilla sales are poised to surpass sandwich bread for the first time in the US with annual sales projected to grow beyond $6-billion. The taco is replacing the North American sandwich!”

Coffeen’s book contains recipes for making your own tortillas, both corn and flour, as well as fillings, salsas and sauces. Additionally, there’s a section of dessert tacos and another on cocktails to serve with taco meals, starting with sangria and including the Chili Rita. Coffeen, who lives in New Mexico,also includes a dictionary of Mexican food terms and with each recipe she includes a “tip” section to help you produce perfect tacos. Here are some recipes if you want tacos to take over your kitchen.

In a small bowl, combine sour cream yogurt, cilantro and lime juice. Transfer to an airtight container or squeeze bottle and refrigerate for 30 minutes or up to two hours. In a large bowl, toss chicken with green onions, salt and pepper. To build tacos, divide chicken mixture equally among the crispy taco shells. Top with lettuce, cheese and sour cream mixture. Garnish with tomato.

In a large skillet over medium heat, saute beef and garlic, breaking up meat with a spoon,until meat is brown. Drain off excess fat. Season with salt to taste. Reduce heat to medium-low. Add eggs and chile to meat mixture. Cook until eggs are scrambled and set. To build tacos, divide meat mixture equally among each tortilla. Fold tortillas in half.

In a large skillet, heat oil over medium-high heat. Saute garlic, spinach, zucchini, mushrooms and rosemary until vegetables are tender-crisp.

Season with salt and pepper. To build tacos, divide spinach mixture equally among tortillas. Top with cheese. Fold tortillas in half.