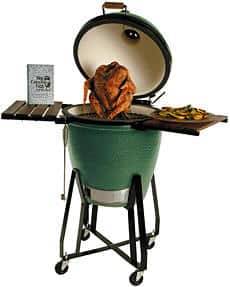 In the past two years I have started to hear a little chirp building steadily into a large blown-out buzz among the grillers and smokers (not Camels) in our group of friends. When I first heard of the Big Green Egg, I thought it might be the long-awaited sequel to Dr. Seuss’s “Green Eggs and Ham.” It kind of became ‘cult’ chat. I was hearing things like, “Have you done the turkey yet?” or “22 hours cold smoke man and still going.” Was this Green Egg thing legal? Did someone buy some pills off a late night infomercial?
What the heck is it and how do I get some? Well, the Big Green Egg has arrived on my outdoor patio, and I am now a total Egg groupie, otherwise known as an “egg head.”

The Green Egg is based on an ancient Japanese clay cooker called the kamado. The mushikikamado was a steam cooker and oven or liln that was used by Japanese families for ceremonial occasions and took the shape of a round clay pot with a removable domed lid and top damper. Americans discovered the clay pot when servicemen brought them back from Japan in empty transport planes after World War ll.

Redeveloped in Georgia in the 1970s, the Big Green Egg has been around for quite some time but has really come into its “nest” since redeveloped from high fiber ceramics developed for the space shuttle program that allows for temperatures of up to 650 degrees. 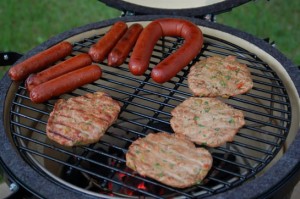 We all know that nothing beats charcoal cooking. Although I have a nice outdoor kitchen, (thank you Absolute Aluminum) the Solaire infrared grill that was installed does create a large amount of smoke if you do not invest in a back draft and is best for grilling steaks, not slow cooking and certainly not smoking.

The Big Green Egg recommends lump wood charcoal, and this really is a must. Cheaper brands use additives that can contaminate your food flavors. Part of the design of the BGE results in a slow burn that uses a smaller amount of charcoal and much less ash. Tip for saving some money, when your BGE charcoal runs out, you can buy 10-pound bags of lump wood charcoal for much less at a local Wal-Mart.

The Big Green Egg also becomes an oven and pizza oven with a few additional parts. Trust me, the pizza comes out as if you sitting in Italy next to a wood bringing oven. Within 15-17 minutes, a simple store bought pizza crust transforms into one delicious authentic pizza pie. My son taught us to use very little sauce as to not make the crust soggy. I suggest using Old World Pizza Sauce, under the sir name of Rustic Crust. The box contains three packets of sauce, each for a 9 inch pizza. 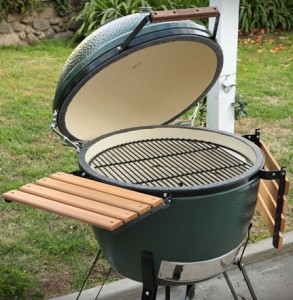 How many grills can you smoke salmon and bake a peach blueberry pie on at the same time?

There are some flaws, however, and when you are laying out $1,000 for an Egg you should be aware of these. Although the company claims the felt gasket is designed for maximum moisture retention during long cookouts,our gasket literally melted by the end of the second day of use. Simple enough, order an extra gasket pack.

Green Egg Cooking Tips:
* You MUST “burp” the BGE three to five times before opening to avoid
burning yourself.
* Keep a meat thermometer close by and use it to avoid over cooking.
* Be prepared to becomes obsessed with beer can chicken and make your
own pizza parties, it becomes contagious.
* Buy the pizza stone and inverted oven. You will make almost anything with these parts.
* Spend the extra money and get a large or extra large size egg. Once you
own a Big Green Egg the party almost always ends up at your house.

This cook admits it, I am a true egg head. In fact, I hope to attend the Eggtober Fest this fall that has already become a legendary grilling and smoking event in Georgia.

The initial investment in a Big Green Egg is high, but the average BGE lasts up to 10 years and you will save thousands driving to Oklahoma, Memphis and Texas to try real BBQ when you get a hankering.

4 thoughts on “The Big Green Egg and I”