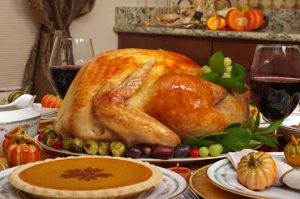 Friends, I can’t believe it, Thanksgiving is almost here. Wasn’t it just the Fourth of July? I swear it was yesterday that I was freezing homemade popsicles and making batches of potato salad for summer picnics.

But now the November and December holidays are looming, and I’m about to navigate one of foodies’ favorite — and most contentious — holiday subjects: stuffing.

I’m not sure there’s another American food that inspires such passion, whether you call it stuffing or dressing, whether it’s served inside the bird or out, whether you make it with white bread or cornbread. It’s all incredibly personal and everyone has an opinion.

The word “stuffing” first appeared in the culinary vocabulary in the 16th century, although in the 19th century the stuffy Victorians decided they preferred the word “dressing,” so that term increased in popularity. Now the two words are used interchangeably, and regional variations of the food itself have emerged: oyster stuffing is popular throughout the country, but many Southerners enjoy pecan, rice or cornbread stuffing. Italians often enjoy sausage in their stuffing. Dried fruit, potatoes and apples find their way German variations.

Some cooks stuff their dressing into the bird; some make it outside and serve it on the side as a casserole.

The good news is that there’s a variety of stuffing options out there — both for the cook looking for to stay close to tradition and the cook who wants to branch out and try something different. Truly, the possibilities are endless. Why not try a Southwestern stuffing that’s filled with jalapeños and tamales and corn? (You can serve it with corn ships, salsa and sour cream and have it do double-duty as a side dish.) Or — yum — sourdough stuffing with balsamic-roasted red onions, sweet Italian sausage and sage? For another Southern twist, you could do bread stuffing with crawfish, bacon and collard greens. Or, if you want to stay traditional, how about a classic farmhouse herbed stuffing flavored with sage, rosemary and thyme?

Whatever you decide, think past Thanksgiving for stuffing. Pork chops, stuffed chicken breasts, veal roasts all deserve a delicious side of stuffing. Here are a few recipes to get your started. 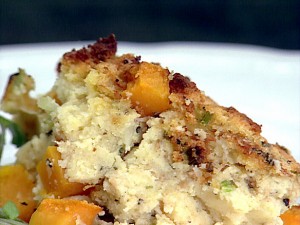 Preheat the oven to 425 degrees. Cut pumpkin in half, and then cut each half into several pieces. Place the pumpkin on a baking sheet and roast until tender, about 30 minutes. Let cool, peel away skin, and dice. Lower oven temperature to 350. In a large skillet, melt 2 tablespoons butter over medium heat. Add onion, celery, thyme, and sage, and saute for 5 minutes or until tender. Season, to taste, with salt and cracked black pepper. 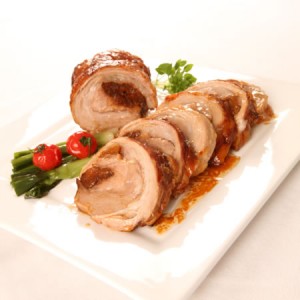 Preheat oven to 375°F.  Place the mushrooms, the 1/2-box defrosted spinach, leaves from the rosemary sprigs, olives, orange zest, and lemon zest into the bowl of a food processor fitted with a metal blade. Pulse to combine to a paste.  Untie the roast. Season both sides with salt and pepper. Spread the stuffing paste evenly over the surface of the veal, generously covering it. Re-roll the roast and tie it just tightly enough to secure; don’t tie too tightly or the filling will all ooze out. The filling will be visible.

Heat the olive oil in a large skillet. Add the veal roast and sear on all sides until the meat is a deep golden-brown. Place the seared roast into a roasting pan. In a small bowl, mix the honey, apricot preserves, and mustard. Rub all the meat surfaces with a thick coating of the apricot-honey mixture, reserving some mixture. Bake for 1 hour, covered. Remove the roast from the oven and baste with remaining apricot-honey mixture. Return to the oven, uncovered, for 15 more minutes. Allow the roast to stand for 10 minutes before slicing. The roast should be juicy and slightly pink in the center. 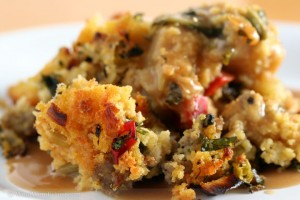 One to two days ahead, make one pan of cornbread according to the box instructions. Let this sit out overnight and get a firm (almost hard) crust.

Place sausage in a large, deep skillet. Cook over medium high heat until evenly brown. Crumble, drain and set aside. In a skillet, cook onion and celery in butter until soft. Remove from heat, allow to cool. In a large bowl, combine crumbled cornbread, sausage, onions and celery. Add sage, garlic powder, salt and pepper. Mix well. In 1/4 cup increments, add chicken or vegetable broth to stuffing mixture. Toss gently until evenly moist. Loosely stuff in fowl or casserole dish and bake at 350 degrees for 30 minutes or until heated to 160 degrees. 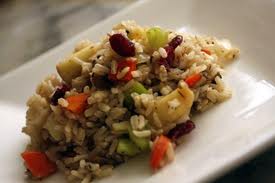 1 medium-large pumpkin, preferably one of the buff-colored pumpkins, prepared as follows:

Pumpkin prep:
Cut off and reserve a lid, as you would preparatory to carving a jack-o’-lantern. Scoop out all of the seeds and fibers. Put an inch or two of water in a large pot. Place the pumpkin, cut side down, in the water, cap wedged in near it. Bring to a boil over high heat. Cover tightly and team for 10 to 15 minutes to precook slightly. Remove the pot from the heat and let cool. When cool, remove from the pot. Since the pumpkin will be eaten with the stuffing, I like to season the inside with salt, pepper, a little tamari, Pickapeppa, and brown sugar, rubbing this into the exposed interior flesh after steaming.

Place the apricots and prunes in a small, heatproof bowl. Place the apple juice in a small saucepan over high heat and bring to a boil. Immediately pour the juice over the dried fruit. Let stand for at least 2 hours, but overnight or a day or two in advance is fine. Drain the dried fruit, reserving both the fruit and the soaking liquid. Coarsely chop the fruit and set aside.

Preheat the oven to 375 degrees, then turn down to 200 degrees. Set a wire rack on a baking sheet and place a single layer of bread slices on the rack. Place in the preheated oven and bake, slowly, turning once, until the bread is hard, crunchy, and dry all the way through, but not browned. This is a fairly slow process — it might take 45 to 60 minutes, but set the timer at 20-minute intervals to remind you to check. You with either need to do 2 sheets’ worth of bread (in which case, reverse their positions in the oven halfway through), or repeat the toasting process again until all bread is prepared. Remove the dry bread from the oven and let cool.

Coarsely crumble the bread into a large bowl. Add the onion and leafy celery and toss to combine. Measure the sage (starting with the smaller amount) into your hands and rub the leaves back and forth in your palms until they crumble (this releases the volatile essential oils). Add the sage to the bread mixture. Pour the melted butter over the mixture and toss well to combine. Add the soaked dried fruit and toss again. The dressing should still be dry. Begin adding the liquid, a combination of vegetable stock and the reserved fruit soaking liquid. Use more stock than juice, and use just enough to moisten the dressing without making it soggy. Keep tossing, adding stock as needed. Add tamari, starting with about 1 tablespoon. Taste for salt and add it and plenty of pepper to taste. More sage, maybe? This is also the point at which you can add a little dried basil and oregano, too, if you like. The stuffing can be prepared up to this point and stored, covered and refrigerated, overnight.

On the day you plan to stuff the pumpkin, preheat the oven to 375 degrees. If not using nonstick, spray a baking dish large enough to accommodate the pumpkin with cooking spray. Stuff the dressing into the cavity of the prepared pumpkin, topping with the pumpkin’s cap. Place the stuffed pumpkin in the prepared baking dish. Place in the preheated oven and bake until the pumpkin is slightly brown and looks a bit collapsed in on itself or about 40 minutes. Serve whole, at the table.