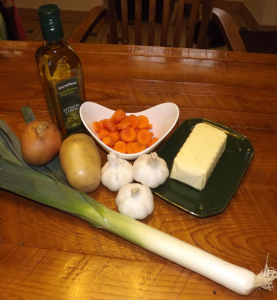 Garlic has always been an impressive little food character – renowned for its ability to perform a variety of tasks from warding off vampires to boosting the immune system. In Medieval times it was applied to the soles of the feet to prevent smallpox! So what can these mellow, sweet little pearls do for us today assuming that vampires are on vacation and smallpox is not rampant in your location.

The French produce about 20 tons of garlic per year and there is even a European label of authenticity to ensure that the garlic is from a specific area. The area of Normandy, in which I am fortunate to live, holds a weekly market which would not be complete without its garlic stall. The popular purple-tinged variety is sold either singly or in a plaited strand…(easier to hang over the door for vampire prevention…?) and occasionally, the stall holder will slice into one of these perfectly formed bulbs to release a fine shower of scented mist to tickle the taste buds of passers-by. This tantalizing odor wafts along the cobbled streets until it finds me, daring me to resist its charms. 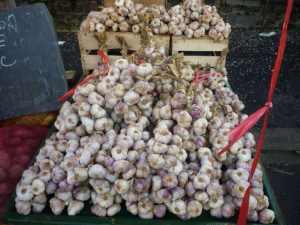 There are many varieties of garlic, differing in pungency size and color. When cooked, the garlic relaxes into a sweet, nutty flavor which is not at all as overpowering as you might imagine. Try it as an appetizer at your next dinner party. Simply cut the top from a garlic bulb allowing for one bulb between two people. Drizzle with a little olive oil. Wrap in foil and bake in a hot oven for around 30 minutes. Inhale as your guests gently squeeze each tender golden nugget from its papery nest and spread it onto warm crusty bread.

However, if like me, you prefer something a little more substantial and rustic, try this traditional recipe for a delicious soup. Although it appears to contain a considerable number of garlic cloves, this recipe really does produce a mellow creamy soup. Break off some chunks of crusty baguette, pour a glass of an inexpensive red wine and as you sup your soup you will be transported to the emerald green pastures of North West France and into my French country kitchen! 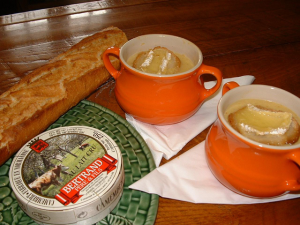 Directions: In a large pot, heat two tablespoons of the olive oil on medium heat and add the leeks, garlic and onion. Cook, stirring occasionally for five minutes. Add the carrots and potatoes and cook for five more minutes. Add the two quarts of water and the bouillon cube and bring soup to a simmer. Partially cover with a lid and cook for about 45 minutes. Just before serving, place the French bread slices on a non-stick tray. Cover the bread with shredded cheese or a Camembert slice and drizzle the remaining tablespoon of olive oil on top (you can use more olive oil if you wish). Bake at 400 degrees for 10 minutes. Meanwhile, in a food processor or blender, and working in small portions, puree the soup with the cream and butter until it is smooth. Return to soup pot and heat through. Season to taste with salt and pepper. To serve, pour soup into bowls or cups and top with a cheese baguette slice.

1 thought on “The Greatness of Garlic”