Key West is known, in large part, for it’s excesses of this sort, or that, not the least of which being the consumption of a variety of fresh seafood – lobster in particular. Being unemployed at one time during my years there, it did not take too long for me to learn how to catch those “bugs” by hand.

In season, my good friend Jeffrey and I would, easily once a week, sometimes more, swim a few hundred yards offshore with our snorkeling gear and bags, and within perhaps two hours we gathered our legal limit. There is only one thing to do with that much lobster, and that, is to eat it! 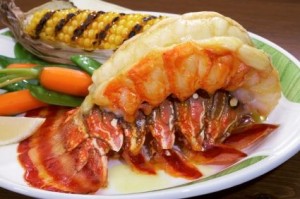 There was little variety in our choice of preparation, or indeed any range of beverage selection. Lobster was grilled over charcoal, and accompanied by either beer, or more likely, dark island rum served with ice and a squeeze of Key lime.

The procedure for grilling was both simple and effective. The entire lobster would be split lengthwise, rinsed to remove the contents of the digestive tract, drizzled with butter, or olive oil, or both, and cooked till done.

The lobster having been split, and the coals at a level for slow cooking, the halves are then  placed flesh down for an initial searing, then turned with the shell down, thus providing a convenient boat for herbed butter. Testing is performed with finger tips, the meat to be firm, not squishy, and certainly not hard.

The main problem with the entire procedure was finding a knife that would be large, heavy, and of the correct proportion to cleanly and evenly split an entire lobster – a conundrum I was able solve thanks to the misfortune of another.

There lived in town at the time an independent shrimp-boat captain named Pinder, who opened a fish store at the corner on Fleming and Simonton streets. His enterprise was applauded and the business prospered until he ran afoul of the Federal government. Captain Pinder, in return for some cash, took his boat to Cuba during the Mariel boat lift and upon his return, loaded with refugees, found himself under arrest and his boat confiscated.

A “going out of business” inventory sale was held at the fish house, and it was there that I found what I refer to as: The Vorpal Blade – the only knife I have ever encountered capable of cleanly splitting a good fresh lobster, without damage to itself. The Vorpal name of the knife refers to  Jabberwocky, Lewis Carroll’s famous humorous nonsense poem. “His vorpal blade went snicker-snack.”  Bon appetite!

1 thought on “The Lobster, Boat Captain and Vorpal Blade”