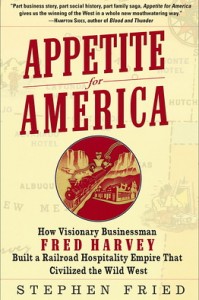 The book Appetite for America is proof that in the American West real history can be as engaging as outlaw exploits and Indian myths. With a journalist’s eye for telling details and a novelist’s skill for telling stories, author Stephen Fried delivers a social and commercial history of the U.S. hospitality and transportation industries through the under-appreciated figure of Fred Harvey.

As an English teen with no other plan than to escape poverty and a fractured family Harvey sailed to New York in the 1850s. Through pluck, industry, and self-study he found success selling train ads and tickets in the Midwest. He became associated with an upstart railroad, the Santa Fe, which gave him an opportunity to match both his ambition and business acumen.

Passenger rail travel was a sooty, noisy affair in the Gilded Age. Deplorable food offered at depots west of the Mississippi added to the discomfort. Harvey was a keen observer of successful east coast hotels and restaurants and believed that he could produce good food and service at destinations along the Santa Fe line (which eventually ran from Chicago to Los Angeles). It was the beginning of a business empire that under his son Ford’s leadership extended to chain restaurants, hotels, and bookstores—even
Native American ethnography. 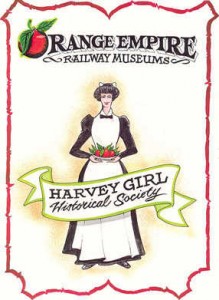 Fred Harvey’s civilizing influence wasn’t the jackets-only policy for men. On the advice of a trusted employee Fred hired an all-female wait staff to calm cowboys and rowdies at far-flung outposts. The company soon adopted the practice throughout the entire eating house chain. Feminist scholars credit the decision as a turning point—the first significant female workforce where women enjoyed the freedom to reinvent themselves in a new place.

For men working in the West, however, “Harvey Girls” meant an infusion of young, capable, comely women where few had ventured before. This gender rebalancing led many Harvey girls to abandon their starched white uniforms for wedding gowns. The West literally and figuratively settled down.

Appetite for America manages to couple myriad narrative threads and personalities together like cars in a swift, gleaming train riding the “high iron.” Whether your interests tend toward business history, biography, the origins of restaurant management, or the romance (and drudgery) of travel you won’t go hungry for entertainment. Foodies will appreciate Fred Harvey’s service standards and dedication to brewing the finest coffee and preparing remarkable meals whether the customer was in Kansas City’s union station or a dusty depot in La Junta, Colorado.

Following Appetite’s release and publication of a limited edition Fred Harvey cookbook interest from chefs and home cooks proved so popular that Fried decided it was time to share his growing private archive of Harvey recipes in an online project—“(H)oping cooks all over the world will try them, improvise on them, and share the results. So, for the next year, we will post a ‘new’ old Fred Harvey recipe here each day. We hope you will read and enjoy them, respond to them with your own versions of the recipes, photos of your Fred Harvey dishes, and stories of your Meals by Fred Harvey, past and present.”
— http://fredharveycookbook.tumblr.com/

The following side dish comes from the Appetite for America recipe appendix.

Sauté two tablespoons chopped onion and three strips of bacon, diced, in two teaspoons of olive oil until tender but not brown. Add one-half cup chopped tomatoes, one-half cup tomato puree, and one half-clove garlic, minced. Simmer until amount is reduced by half, about twenty minutes. Wash one cauliflower (one and one quarter pound) including the good leaves and stems; chip fine. Cook five minutes in boiling salted water and drain. Add to tomato sauce and serve. Sprinkle Parmesan cheese over each serving if desired. (Recipe was created by a sous chef at St. Louis Union Station for the droves of immigrants passing through).

(Appetite for America: Fred Harvey and the Business of Civilizing the Wild West — One Meal at a Time by Stephen Fried. New York: Bantam Books, 2010. $18.00).